Hoarder, 47, ‘created a hell to live in’ surrounded by bottles of her own urine, cat faeces, and plates of food piled high with maggots that caused her kitchen to become bio-hazard

A woman who had to urinate in empty soda pop bottles because she couldn’t reach her own toilet due to piles of rubbish, has been forced to call in the experts once again.

Sally, 47, lives in an 18-storey flat in Dudley, West Midlands, along with her cat Custard and mounds of rotting, maggot-infested plates of leftover food and clutter.

She says in Channel 5’s Hoarders: Buried Alive in my Bedroom, that the filthy mess she’s accumulated has ‘created a hell to live in’.

Her flat once became so inhabitable that the council had to be called in to do a total deep-clean. However, it’s taken just two years for Sally to refill it with more rubbish, finding herself in the exact same situation. 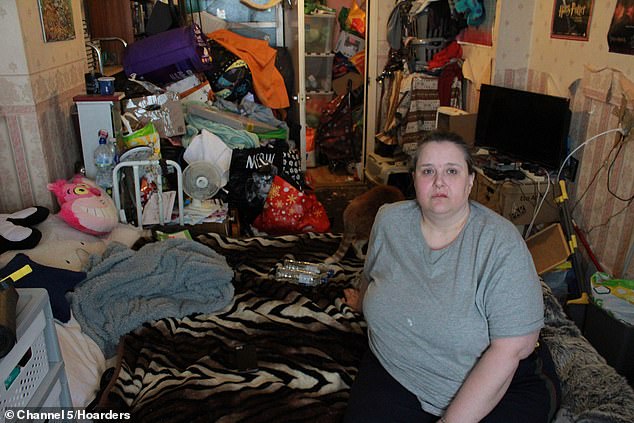 Sally, 47, finds herself surrounded by piles of rubbish and clutter after failing to clean up after herself in Channel 5’s Hoarders Buried Alive in my Bedroom 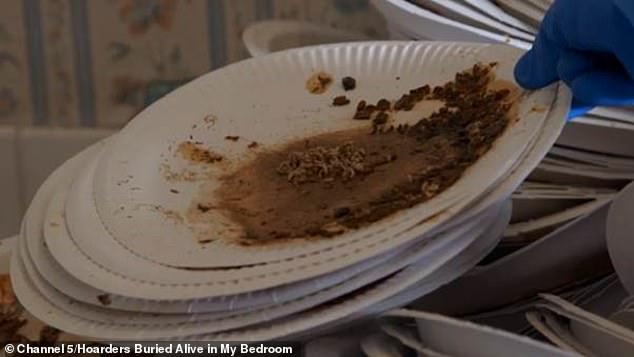 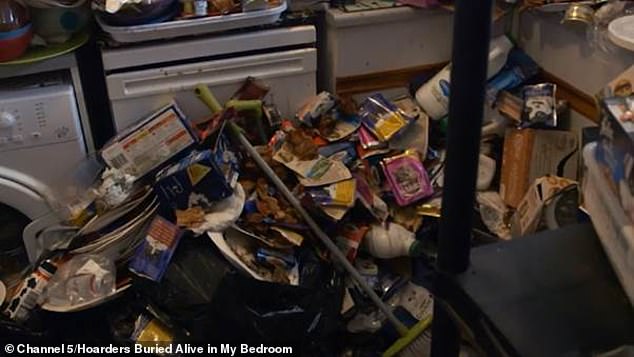 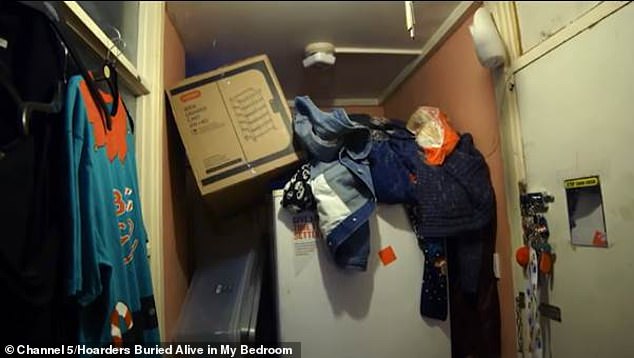 Sally reveals how her mother dying triggered her hoarding and has she has since struggled with the responsibility of taking care of her ailing father.

‘I class myself as a rubbish hoarder. I did read an article that some people who are hoarders in sense of collective are very bright and intelligent people. I’m not saying I am, but there are people who are.’

Her flat had become such a state previously that she had carpet bugs crawling over her and she hadn’t slept in her bedroom for 13 years.

‘I started urinating in bottles because I couldn’t get to the toilet in time and had the cats living around me,’ she said. 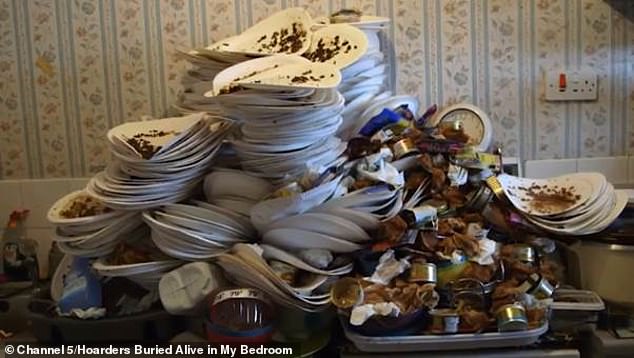 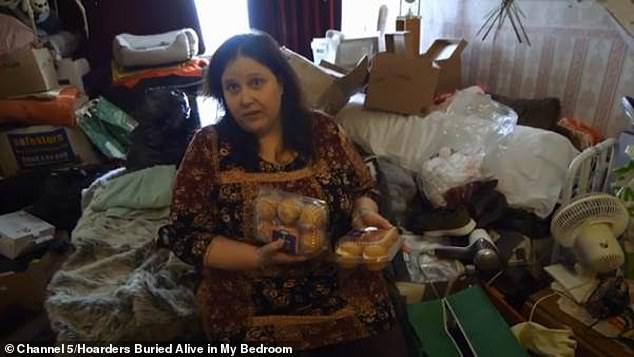 Sally’s kitchen is so overrun with empty food packets and paper plates that she even took to making sandwiches in bed, surrounded by mouldy bread and opened jars of food.

Specialist cleaners Caz and T are called back in and are absolutely dismayed at the abysmal mess she’s in.

Sally is admonished by the pair who inform her that because of the filth that has piled up in the kitchen it has to be classed as a bio-hazard.

‘You’ve kept us in the dark Sally. You haven’t mentioned how bad it was, you lied to us,’ they say. 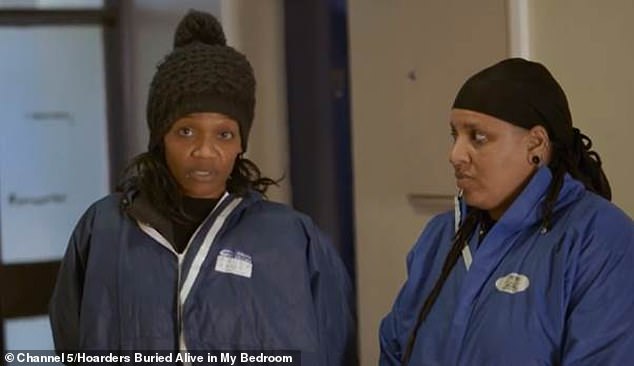 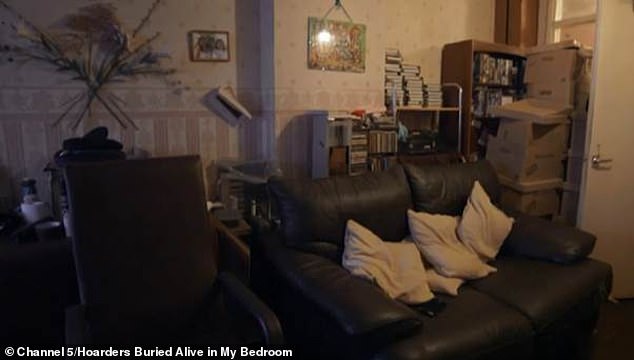 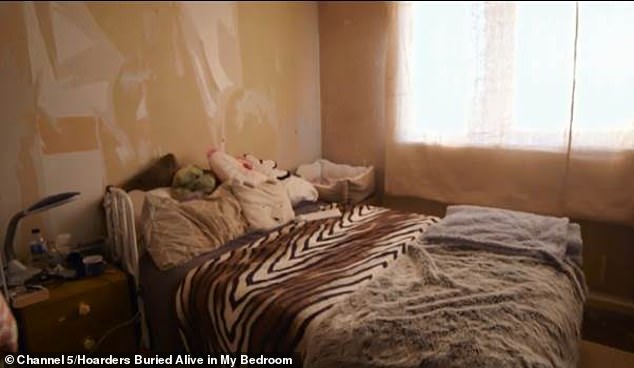 ‘She didn’t want to disappoint us I suppose. We don’t feel let down because it is a mental health issue. What we are upset about is that the help is there for her and she hasn’t accepted it,’ the cleaners add.

‘I know I make excuses and I shouldn’t,’ Sally laments.

She explains that after the first time she received aftercare counselling for 18 months but once that stopped her bad habits crept back in.

Caz and T work for four days straight to clear out nearly a tonne of junk in Sally’s flat and she promises to keep a daily routine so that she won’t repeat her hoarding mistakes.

‘It feels absolutely wonderful so much so I was crying about it,’ Sally says as she admires her clean floors, surface tops and her bed once again. 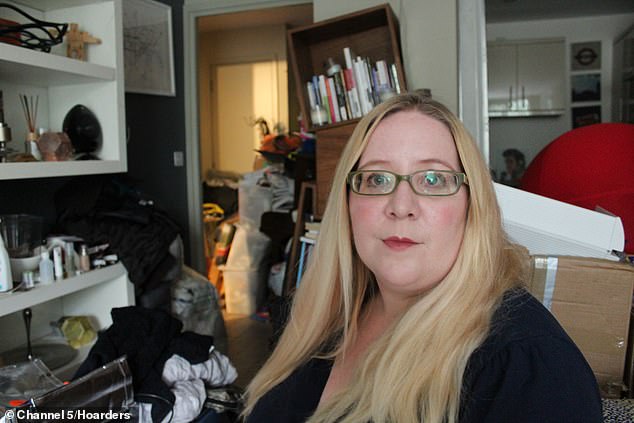 Elsewhere in the C5 documentary 40-year-old Faye, from north London, suffers from OCD and depression and has to battle with her own hoarding demons.

Faye has her own ritual when it comes to taking the trash out which involves shaking each item 30 times before it can go in the bin.

She hoards boxes of out of date food from 2011 and has to learn how to part with her bargains.

She is encouraged to tackle one room at a time to clear out some of the junk she has been obsessively collecting over seven years following the breakdown of her marriage.

Hoarders: Buried Alive in my Bedroom airs Tuesday on Channel 5 at 10pm