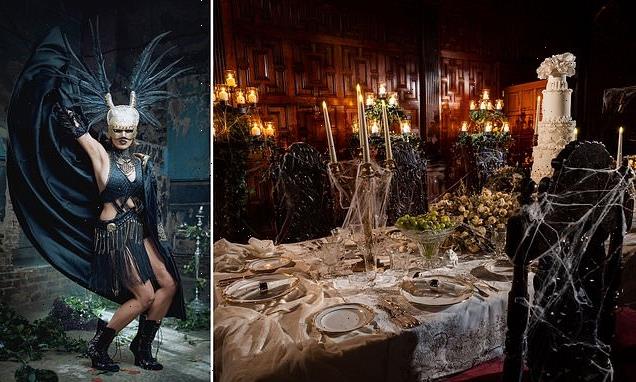 How the rich are spending scary amounts on Halloween: £550 pumpkin cakes. Couture costumes. And parties for a horrifying £100,000

Forget pumpkin-carving and applebobbing. This year’s Halloween parties are more lavish than ever.

After last October’s muted affairs, the spookfest is now bigger than New Year’s Eve, with the super-rich really pushing the boat out. We reveal the top trends for a most frightfully extravagant evening . . .

Decor is everything for a luxe Halloween. Some devotees are even having their own over-the-top theatrical backdrops built.

Charlotte Aitken, of Albion Parties, plans events for wealthy clients and says the ‘London elite’ spend ‘tens of thousands decking out their homes with pumpkins, seasonal flowers and mechanical skeletal props outside the front door’. 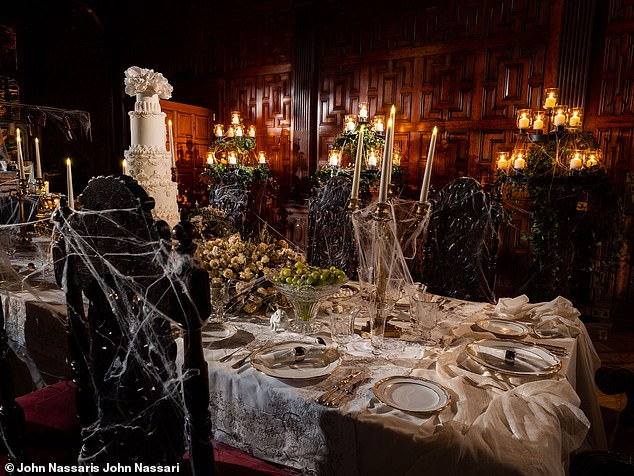 In pursuit of the perfect setting, some people hire spooky venues rather than hosting at home.

Laura Slater, of Bubblegum Balloons, decorates private London homes with bespoke balloon installations costing up to £4,000. Because people are embracing Halloween like never before, her business has grown by 150 per cent this year alone.

‘We were getting enquiries and orders as far back as August,’ she says, adding: ‘The work we do in private homes is often the best; they have the biggest wow factor.’

Lose that cheap old felt witch’s hat. According to Charlotte, her clients are opting for couture costumes ‘from designers such as Alexander McQueen’ which can cost upwards of £1,000. And children are being treated to bespoke outfits, too.

‘One child was taken by her mother to a dressmaker in London to have a bespoke Harry Potter outfit made for her,’ she says. Another woman had a body-paint artist come to her house for five hours. She looked amazing.’ 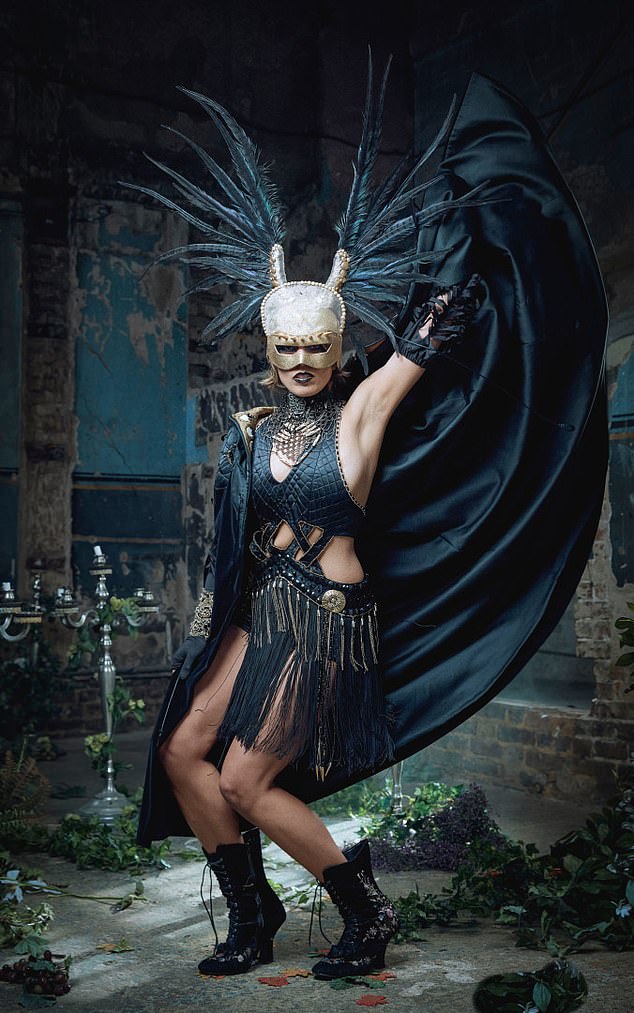 Christina Rhodes’s Black Rabbit Projects offers its partygoers the use of an in-house styling team: ‘They can do professional hair and make-up and will style your staff if you are hosting.’

Ahead of the event, stylists create mood boards around how you want to look and feel. They will do personal shopping for your outfit and come to your home for fittings and tailoring.

‘The cost varies but you’re looking at about £1,000 per person,’ says Christina. ‘I’m a goth at heart, so this year I’m going as Mrs Coulter with my partner as Lord Asriel from Philip Pullman’s His Dark Materials.’

For some, apple bobbing no longer cuts it. The entertainment has gone extra-special, too.

Charlie Astor, director at Sharky & George, who plan bespoke Halloween parties costing up to £15,000, says: ‘We are organising an immersive Halloween party where children must raise Frankenstein from the dead.

… and here’s how to do it in the real world! 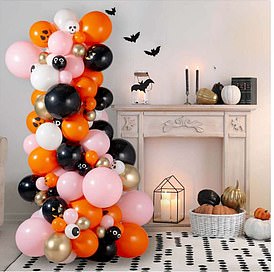 They meet a weird scientist on the top floor who will use dry ice, slime and exploding experiments to create a life-giving potion. The children take this potion and shoot their way through several rooms of zombies with Nerf guns.

‘On the next floor down, they hand the potion to a vampire magician. If they pass a test, they get a wand and a spell. They then go to the basement, which will be pitch black with UV arrows and ghostly sounds, leading them towards Frankenstein, who they must revive with potions and spells.’

Private members’ clubs are also embracing the spooky season. Tickets to the legendary Circus of Horrors Halloween bash at Annabel’s, with its ‘cacophony of terrifying surprises’, are rumoured to have sold out in six minutes this year.

And there is a waiting list for tables costing up to £2,000 at Raffles nightclub in Chelsea for its Día de los Muertos Mexican-themed event, which starts at 10pm on October 28 and finishes at 4.30am on the 31st.

A Staple of children’s parties, craft has gone up a level for Halloween this year.

Chris Murphy, of Tuck-Box Cakes, who offers baking classes for children, says: ‘I’ve been booked for a two-hour autumn leaf cookie-decorating class for nine-year olds. For £95 per child, I teach them how to decorate cookies using different shades of icing and marbling techniques.

‘When I got to one party, I was competing for the kids’ attention with a funfair-sized helter-skelter that was taller than the house and fireworks that spelled out the kids’ names in the sky.’

The high-end children’s entertainment firm Notorious Kids offers a ‘Gory Gourmet’ class for up to 20 children for £800, which includes two entertainers.

When it comes to treats, red velvet cakes that ooze ‘blood’ when sliced open are popular, says Chris Murphy, of Tuck-Box Cakes. One famous musician has ordered a three-tiered version topped with a golden pumpkin, at a cost of £550.

‘Smashing pumpkins’ are another hot trend. Costing £250 each, they have a chocolate shell like an Easter egg and are filled with sweets. Each box contains a wooden mallet so children can smash their way into the treats.

Chris says: ‘One celebrity mum ordered my ‘smashing pumpkins’ for 20 children in her child’s class, which added up to £5,000. They were couriered direct to the school in taxis.

‘I personalise them with sugar stalks and leaves, then airbrush them so they look incredibly realistic. Each child’s name is projected onto the finished pumpkin in calligraphy. It’s about two days’ work.

‘I’m more in demand than I’ve ever been, with enquiries up 25 per cent on previous years.’