Don’t say you weren’t warned – the movie begins with a sex tape and the clue is in the title – although if pornography had as many fertile ideas as this Romanian slice of satire, it might be less boring.

To put it another way, in a world where police murder, terrorist violence, famine and all forms of human depravity are commonly available as spectator events, it seems odd to object to the fact some people like to film their home-made sexual adventures. Although I doubt Radu Jude wants to tell anyone how to think. His argument here is more that not thinking is not working so well for us all. 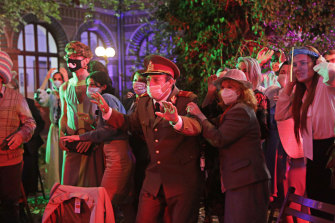 Jude is a 44-year-old Romanian director with a long list of credits – shorts, documentaries and features. He has won a slew of prizes, including the Golden Bear in the most recent Berlin Film Festival for this one. He is steeped in the history of cinema: you would have to be, to break this many rules. Bad Luck Banging… is about the most unconventional film to wash up on these shores since Godard was a film critic – and Jude is less of an egotist.

The sex tape is short but riotous, as a couple in their 40s go at it with dirty talk and physical gusto. We then follow Emilia, a teacher at an exclusive school (Katia Pascariu) as she walks the streets of Bucharest, during the pandemic. Everyone is wearing a mask and everyone is cranky. Emilia remonstrates with a man who has parked his car on the pavement.

He responds with a stream of sexualised invective. Another man yells at a driver who nearly knocked him down, daring the driver to do it again – so he does. Shards of real footage show what real people sometimes do to each other – like the bus driver who refused to carry a Roma woman on his bus, then flogged her with a stick when she remonstrated.

The camera follows Emilia for long periods, but it keeps rolling as she leaves the frame, so we focus on the backgrounds. The buildings are dilapidated, the streets chaotic, shops shuttered. Jude punctuates the action with his own comments and quotes from famous artists, so the film becomes an essay.

He structures it into chapters, each wildly different in style. A middle section uses subtitles rather than voice-over to document some of the madness of Romanian history, before and since the fall of the dictator Ceaucescu. Jude gives ferocious attention to the country’s long history of anti-Semitism.

Slowly, we begin to understand Emilia’s problem. Someone has uploaded the sex tape and now everyone at her school is aware of it. She must face a tribunal of angry parents. This constitutes the third act, a star-chamber, in which it’s clear Romania’s past is far from past. All the social distortion of the war, the communist years and the dictatorship play out in the leers and jeers of a group of socially advantaged caricatures. Emilia, a beacon of learning, sensibility and thoughtfulness, must defend her right to a private life against the vandals.

This is pungent satire, ripped straight from recent pandemic hysteria, and it resonates far beyond Romania’s borders. Hypocrisy is hardly an isolated condition, even if the kind of hypocrisy Jude holds up to ridicule here is very specific.

The free-flowing form of the movie will irritate and intimidate some. That’s the point, and part of the reason for the explicit sex. This polemical form is not new in cinema but it’s so rare nowadays that it might seem like it is. And to be fair, most of Radu Jude’s predecessors in this area, from Eisenstein and Bunuel to outragers like Jodorowsky and Ken Russell, have retained a stronger semblance of narrative.

There is a story here, but you have to pan for it. And like gold dust, it can be stimulating to find the way the ideas link up and cross-fertilise. There is zero chance of someone in our film industry being able to fund something like this, even if they had the daring. Our loss, I reckon.

TV, movies, Find out the next TV, streaming series and movies to add to your must-sees. Get The Watchlist delivered every Thursday.