Premier Daniel Andrews has questioned New South Wales’ containment of its coronavirus outbreak, labelling it a “second wave” as he escalated restrictions so Victorians north of the border cannot return home from Wednesday.

The hard block on entries from red zones, including all of NSW and the ACT, will last for at least two weeks and rehashes the rigid border policy that had not been adopted since the New Year period, when thousands of Victorians found themselves stranded interstate. 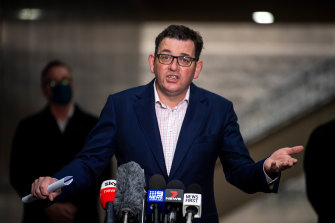 Under the new rules, the only people allowed into Victoria are authorised workers and those who get approval for a compassionate exemption.

“If you’ve got a government saying ‘well tough luck, you left so you can’t come back’, I fail to see how that achieves the public health objectives in a compassionate and understanding way,” said Associate Professor Kamradt-Scott, the incoming chair of global public health at the European University Institute.

Mr Andrews extended Victoria’s lockdown for another week after 13 new cases were recorded on Tuesday. Stay-at-home orders, a five-kilometre movement limit and mask-wearing in all settings will remain mandatory until 11.59pm next Tuesday.

The Premier said further business support would be announced for the hardest-hit industries on Wednesday.

“We know the businesses and families will do it tough over these next seven days,” he said.

Victorian Chamber of Commerce and Industry chief Paul Guerra said the extension was devastating for business.

“Businesses understand the need to protect public health, but they can’t keep bearing the disproportionate cost of lockdowns,” he said.

South Australia moved into its own seven-day lockdown from 6pm on Tuesday in response to a cluster sourced back to a man who spent 10 days in hospital in Sydney before flying to Adelaide. 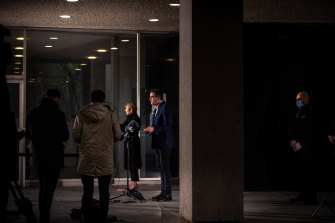 The Premier announced a week-long extension to the initial five-day lockdown on Tuesday.Credit:Eddie Jim

Mr Andrews acknowledged the “very challenging” call to ban all arrivals from Sydney, a move that resembles his “greatest good for the greatest number” push to slash international arrival caps in the hope of avoiding further lockdowns.

Victorians in red zones, as defined by Chief Health Officer Brett Sutton, were previously allowed to complete their 14-day quarantine at home.

The Premier revealed restrictions in the ensuing weeks would hinge heavily on virus numbers in Sydney and “measures they may put in place”.

“I’ll just remind you all, we had a ‘ring of steel’ around Melbourne last year, and it didn’t just protect Victoria, it protected the whole country,” he said, in reference to the police checkpoints installed to separate Melbourne from regional Victoria.

“I’ve had to announce these red-zone permit changes today. I don’t get any joy from doing that, having to say to people who want to come home for the best of reasons, no you can’t … [but] they are not locked into Sydney, so they must be locked out of Victoria. That is the choice I’ve had to make.”

Asked if he would like NSW Premier Gladys Berejiklian to introduce a ring of steel around Sydney and the neighbouring areas that are in lockdown, Mr Andrews said “that’s entirely a matter for them”.

“I don’t want to see more cases from Sydney … those steps are a matter for them.”

Arrivals from red zones will be sent back on a return flight or put into hotel quarantine in Melbourne – although a spokeswoman confirmed to The Age that the Victorian government lacks the legal framework to charge domestic travellers for hotel quarantine, meaning each traveller’s approximate $3500 stay would be funded by taxpayers.

About 21,000 people have entered Victoria on red-zone permits in the past month and while almost all have adhered to home quarantine, one person broke it to visit Coles in Craigieburn, where they passed COVID-19 to a friend. The City of Hume outbreak now has 11 cases.

Associate Professor Kamradt-Scott, an expert in the spread and control of infectious diseases, argued Victorian residents who were locked out of the state needed to be supported by the government.

“There are different and very legitimate reasons why people may need to travel, such as supporting a loved one, providing care … attending funerals,” he said.

He said the most dangerous period for a leak from NSW was not right now, but if Victoria eliminated the Delta variant, eased lockdown and there was still a COVID epidemic running rampant in Sydney.

“That’s going to be the most dangerous time for us because we will be going back to normal interaction,” he said.

“This means any case drifting across [from NSW] will have the potential to cause an epidemic in Victoria.”

The epidemiologist said the traffic light permit zone border controls were not up to the task of containing the highly infectious Delta variant and a strict border may need to remain in place ongoing until NSW squashed its outbreak.

Opposition leader Michael O’Brien agreed with Mr Andrews’ belief that Victorians in NSW had been given enough notice to return home before Tuesday but said the government should have done more to solidify the border earlier.

“We’ve been calling for weeks now for a roll out of rapid testing. If those removalists had been subject to rapid testing at the border … they could have been identified within 15 minutes as being positive cases, and turned back,” he said.

In a sign of Victorian contact tracers’ difficulty in extracting information from the Sydney removalists who sparked the state’s largest cluster, another exposure site emerged on Tuesday, with a BP roadhouse in the western Victorian town of Nhill confirmed as a tier-two location.

On Tuesday night, the Gippsland Primary Health Unit confirmed a new positive case in the Wellington Shire, which covers towns including Sale, Yarram and Maffra.

It said the Wellington Respiratory Clinic would increase capacity but there were no exposure sites associated with the positive case because the person was in quarantine while infectious.

Other testing sites will also be set up in Sale and Yarram on Wednesday.

Authorities said on Tuesday that the lockdown could not be lifted until almost all new cases had been in isolation while they were infectious. Four of Monday’s 13 new cases had spent time infectious in the community.

Most of Tuesday’s new cases are linked to the outbreak at the Ms Frankie cafe in Cremorne, where a further three staff members, two patrons and two household primary contacts had tested positive for the virus. 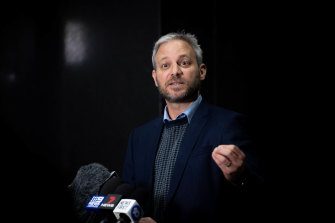 There were two new cases at Trinity Grammar, two household contacts of an MCG case, one from the group that toured Phillip Island and a mystery case at Roxburgh Park, believed to be connected to the City of Hume outbreak.

There are now 18,000 close contacts throughout the state, one-third of them in regional areas.

Three of the state’s 85 cases were in hospital, none in intensive care.

“Our members are telling us that it takes them four to six weeks to get their business rhythms back to pre-lockdown operations, and three months to get their trading levels back to what they were experiencing prior to any lockdown,” she said.

Ms Mariania said the spend from domestic and international tourists nationwide had halved from $150 billion in early 2020 to about $80 billion currently.