Women in the workplace have a new haven where they can connect, learn, and grow.

Chief, which launched in January, is a private network for aspiring or current womenexecutives that focuses onmentorship.

It’s one of many coworking spaces cropping up across NYC at various price points, among themSpring Place, another members-only club also located in trendy Tribeca, where monthly membership can run up to $1,250, andRockefeller Center’s Club 75, which is geared specifically at CEOs and directors.

Read more:Forget the Upper East Side — Manhattan’s richest neighborhood is all about subtle wealth, and it shows a major evolution in how the elite are living

I recently took a tour of Chief and expected the swanky Tribeca clubhouse it operates out of to have the feel of an exclusive members-only club. What I found instead was an inviting and down-to-earth space that seemed designed to cater to the networking needs of its members.

Take a look inside Chief. 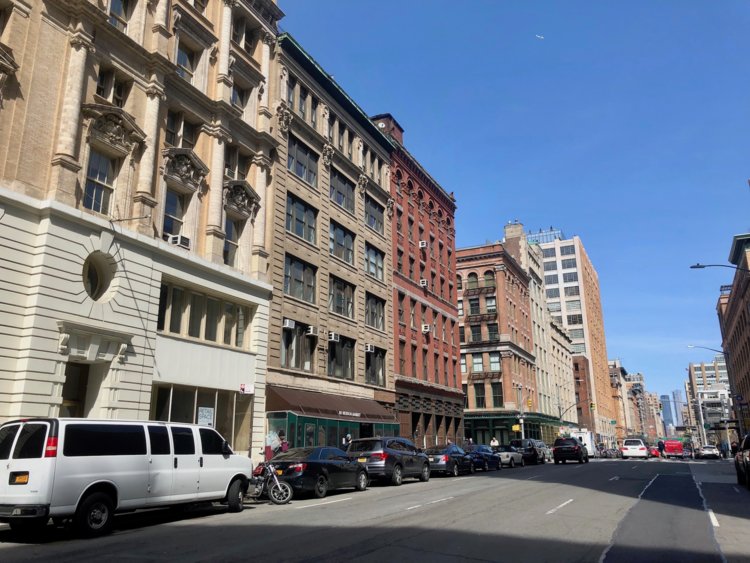 Carolyn Childers and Lindsay Kaplan, previous VP-level executives, are the founders of Chief.

Childers said they prioritized space before location — the neighborhood feel and character of the area was a “nice addition.”

The clubhouse is located on the second floor of a residential building on Hudson Street, which had life but wasn’t overly bustling. 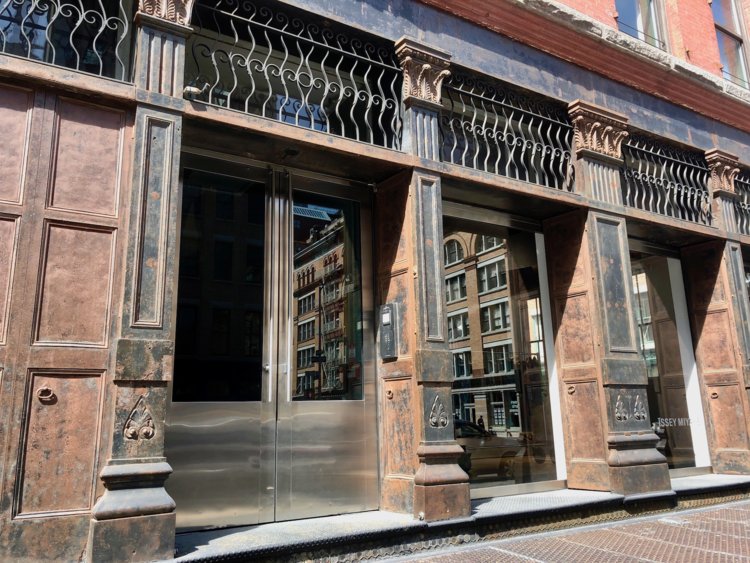 I found the neighborhood vibes to mirror what was waiting for me inside.

The clubhouse felt welcoming as soon as I stepped in. 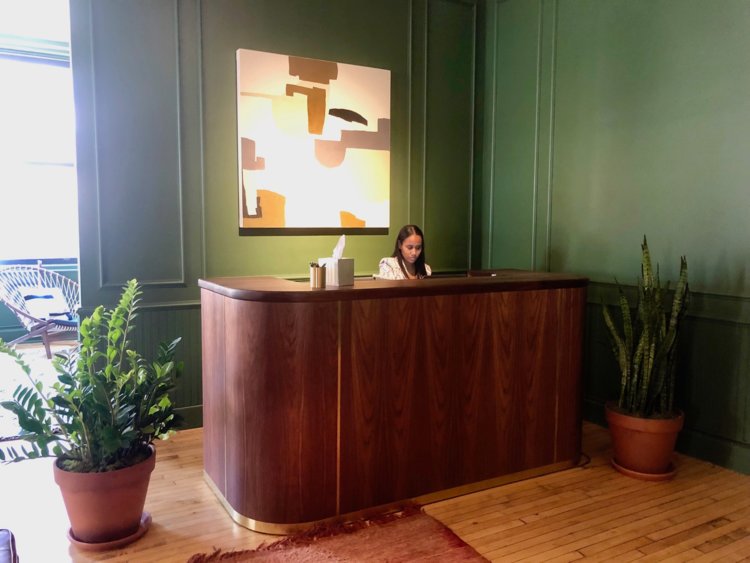 The main room is painted green for an inviting feel that symbolizes a place of leaders. 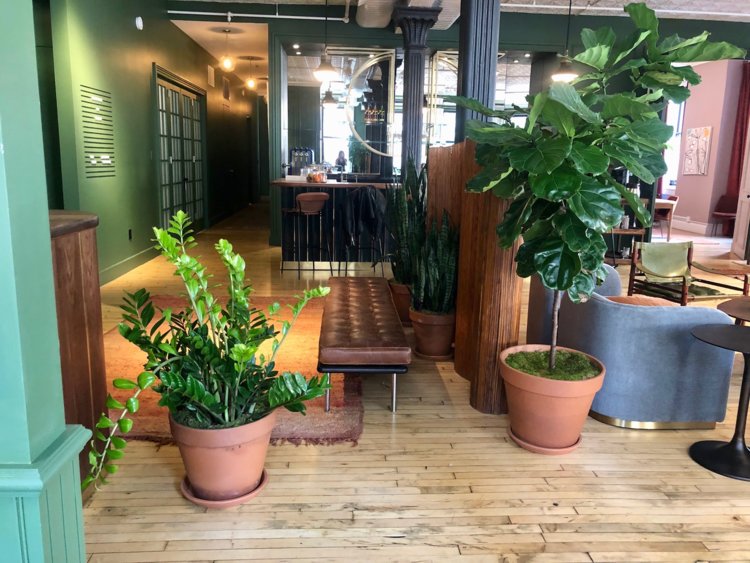 “Leadership isn’t gendered,” Childers said. “The opposite of pink is not blue; green is inclusive.”

Designed in collaboration with Amy Butchko and Adrienne Laube from The Springs Collective, the look is bold and dominant, but calm. 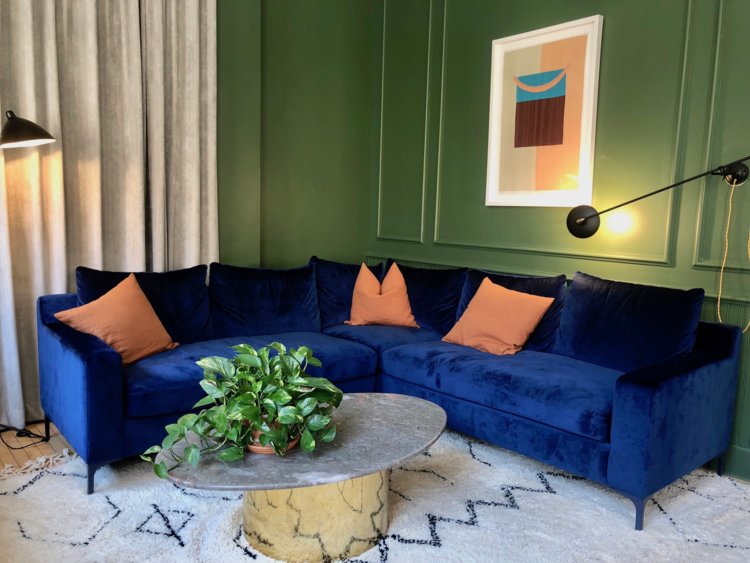 It merges tropical plants with a mix of antique furnishings and contemporary statement pieces.

Brown leather armchairs brought in clubhouse vibes — they were some of the softest chairs I had ever sat in. 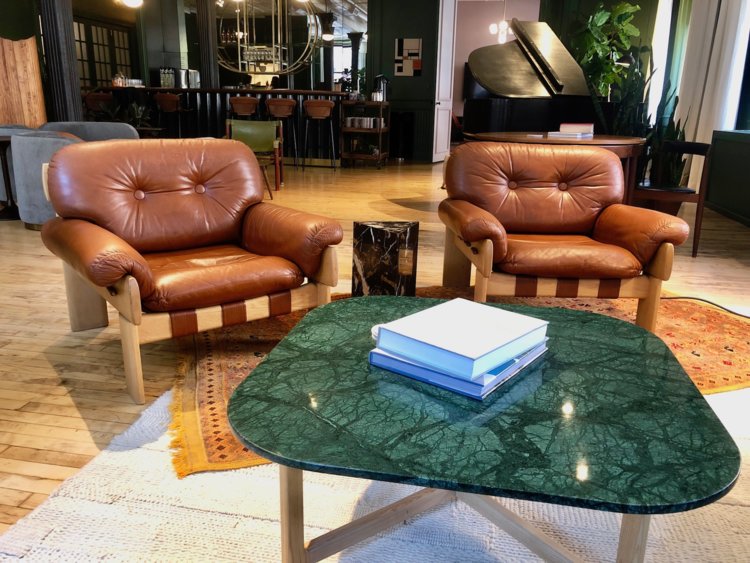 I was tempted to stay there with one of the many books scattered throughout the clubhouse.

My favorite part of the space was the grand piano — it made for the perfect statement piece. 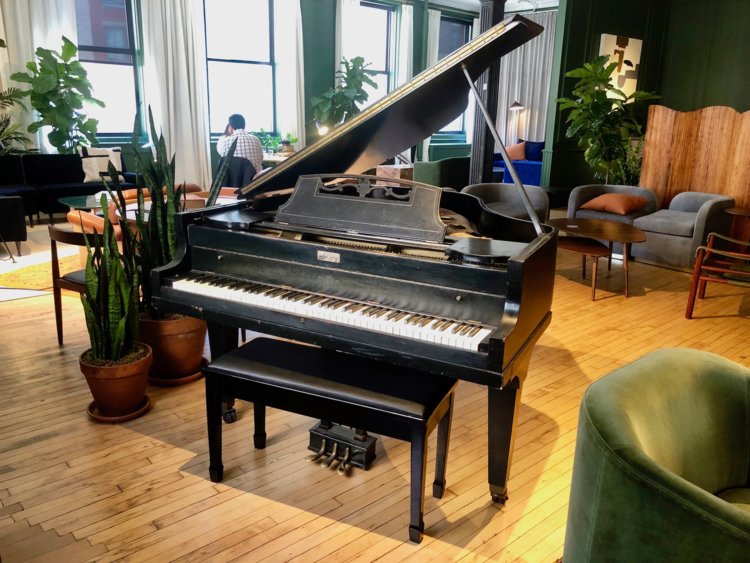 Membership, which includes access to the clubhouse, ranges from $5,400 to $7,800 for VP levels and C-suite executives, respectively, although about 60% of the members are sponsored by their companies, according to Kaplan.

For those paying out of pocket, there’s a grant program available.

I thought Childers summed it up perfectly when she described the aesthetic as “your weekend power suit.” 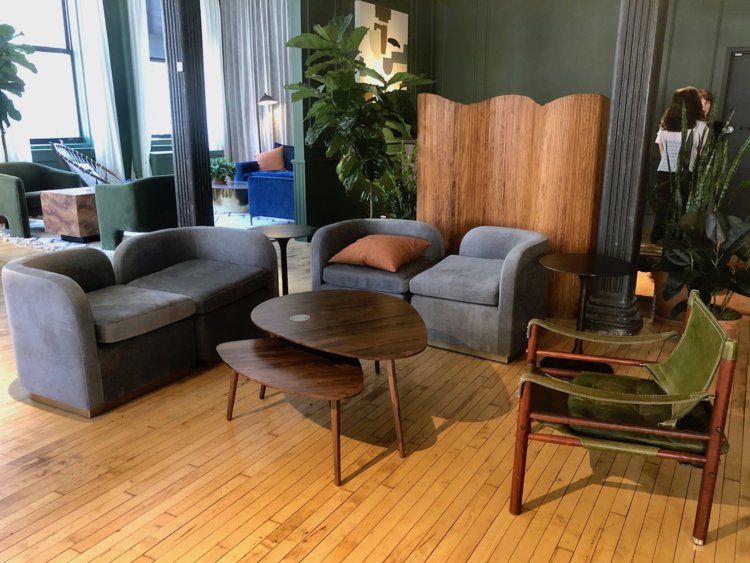 The founders hoped to fill a void by creating a helpful community focused on and tailored to C-suite women, according to Childers — Chief is both a safe space for them to talk about issues like work-life balance and build lines of succession for the next generation.

“We’re not elite,” Kaplan said. “We’re selecting spirits that are here for a good reason.”

Currently, Chief has 500 members in their 20s to 60s from more than 400 companies spanning a variety of industries. 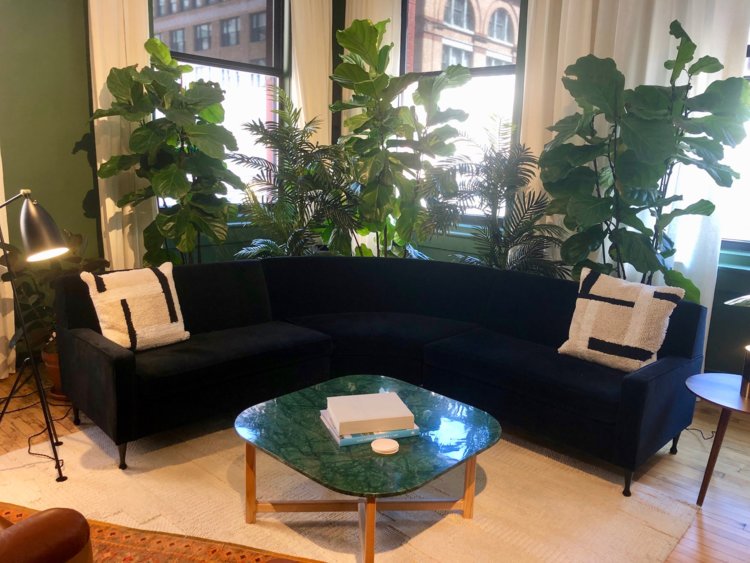 While Chief is geared toward women, it also welcomes men. There’s an application process to get in, with what the cofounders told me is currently a 3,000-person waitlist.

The green room is “where the magic happens,” Kaplan said. 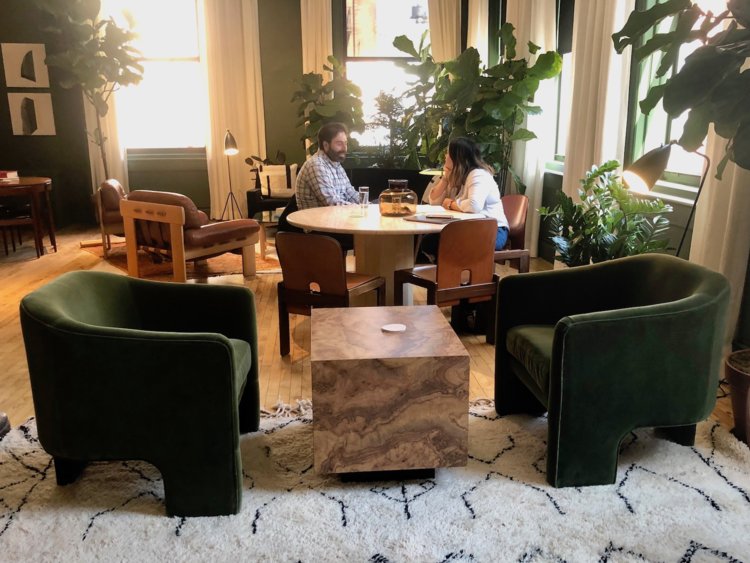 It’s divided into several lounge areas, designed with a focus on conversation — “how people can use the space to connect and put a drink down, rather than work and put a laptop down.”

This layout helps the function of Chief’s key service — core groups, in which members are organized into groups of eight to 10 women from a variety of industries but at the same career and experience level. 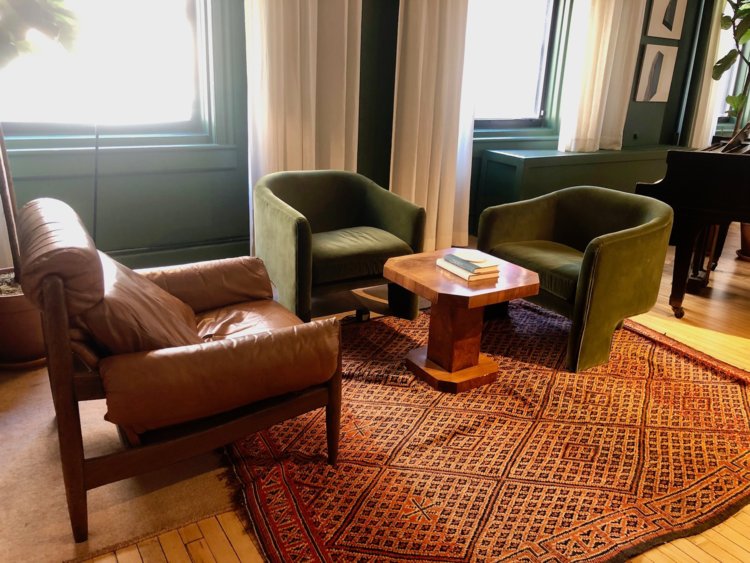 In these groups, members learn from each other. Kaplan said it’s “think tank meets work therapy” — mentoring is the number one thing members get out of Chief.

The space has an elegant wood bar, which serves wine in the evenings. 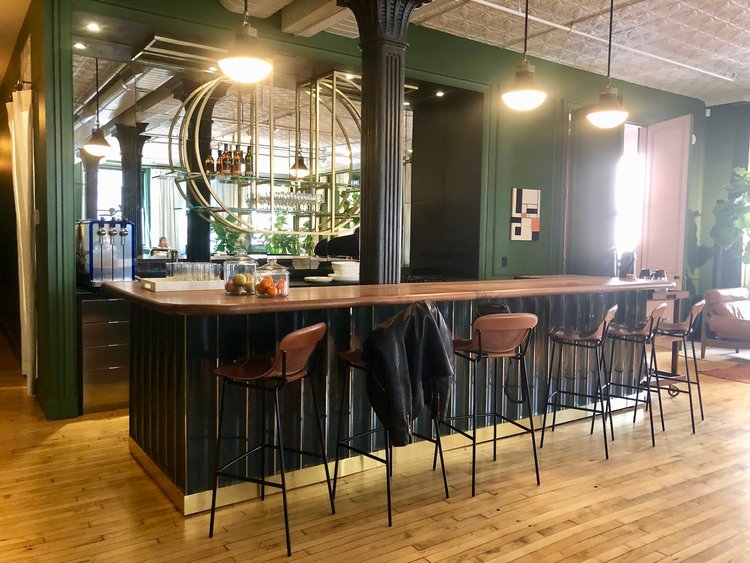 With a wide-length mirror and a modern gilded wine rack, I thought the area easily became a focal point of the room — a perfect place to have a conversation. 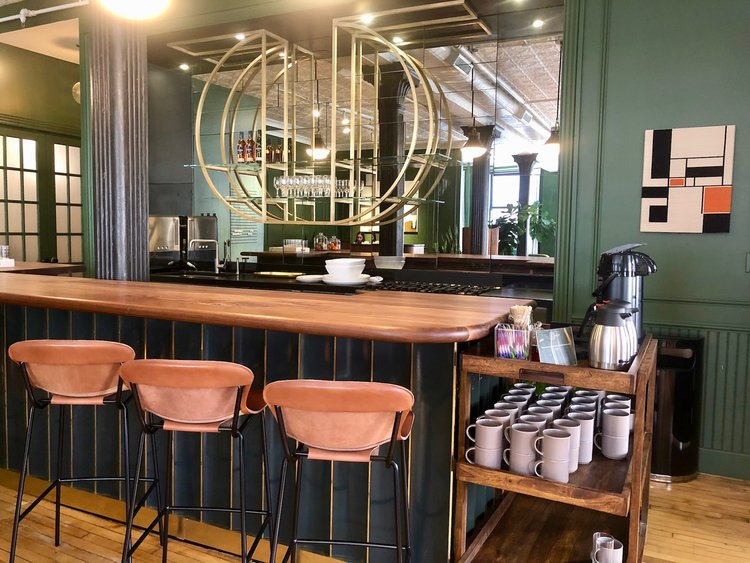 Members can also gather in one of the two board rooms. 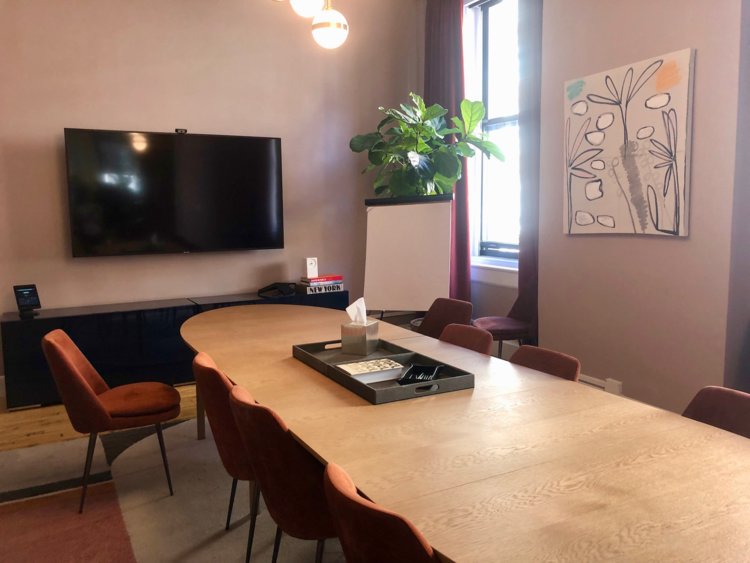 In one, there’s a carefully curated bookshelf covering a variety of topics, from arts and culture to feminism and architecture. 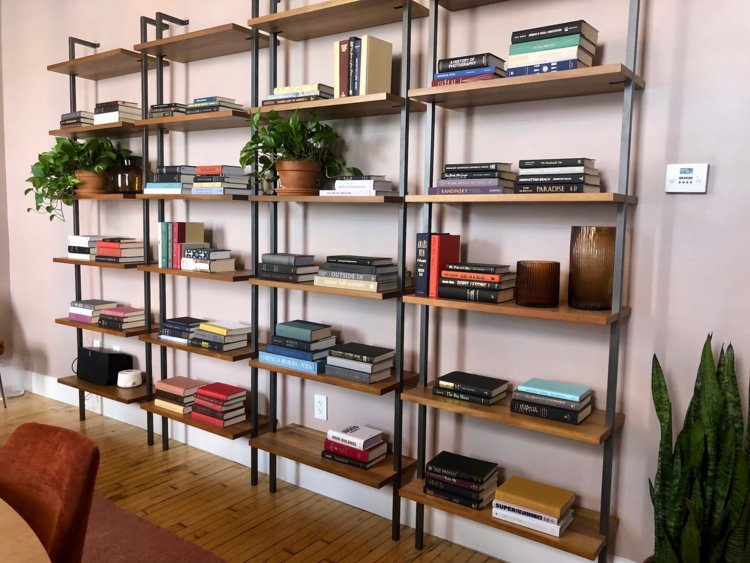 “The books represent who we think our women are,” Kaplan said.

The other board room features a great gallery wall. 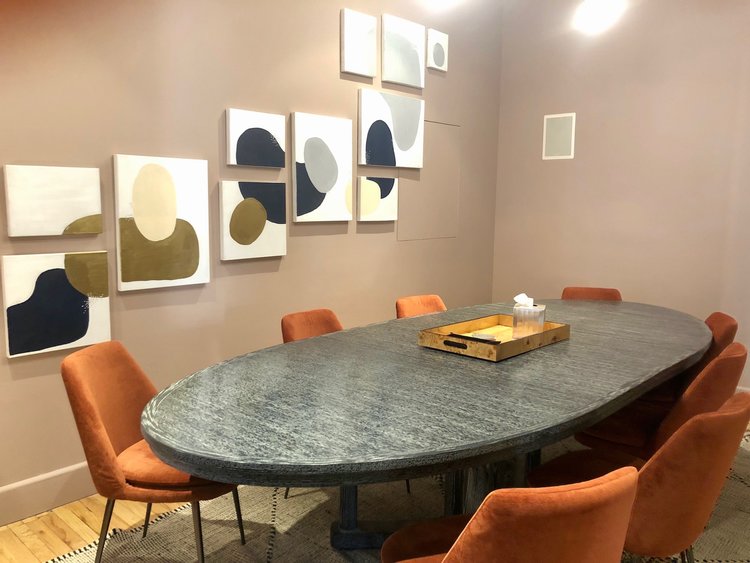 Most of the artwork in the space was curated by Uprise Art, a female-founded, women-led team. They showcased female artists with powerful, bold, and engaging works.

All of Chief’s artwork is by women. 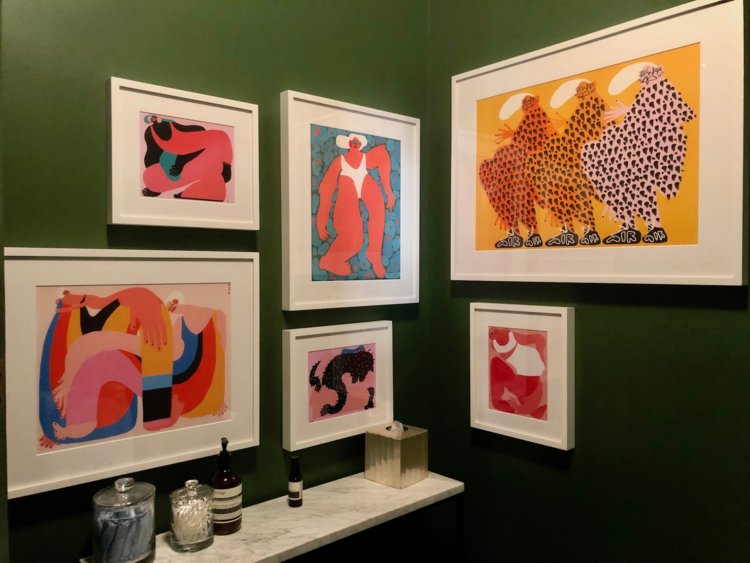 Some of my favorites were these bold and fun pieces by Amber Vittoria in the entry bathroom.

There’s also a bathroom in the back, which leads to a nursing room currently being remodeled. Like most bathrooms, it has a tub and a shower — but in this case, they’re not for use. 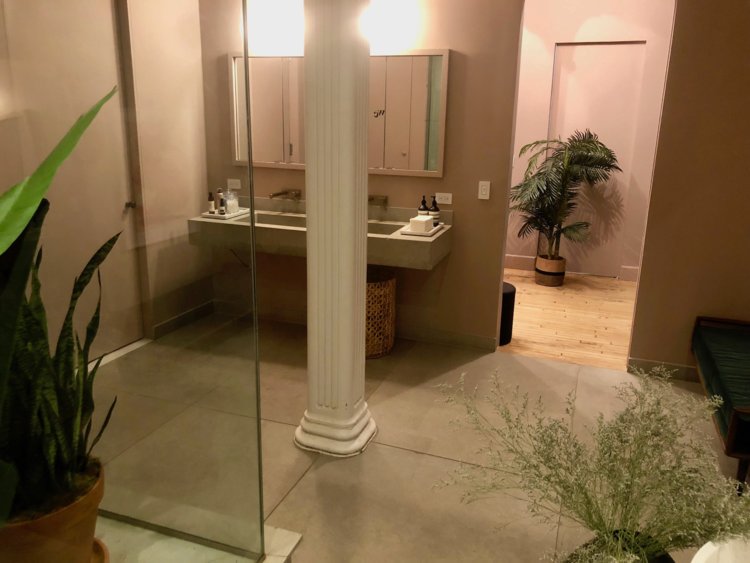 As it turns out, the clubhouse was previously a bachelor pad. The tub couldn’t be removed, so it stayed. I thought it was quirky and fun and added character. 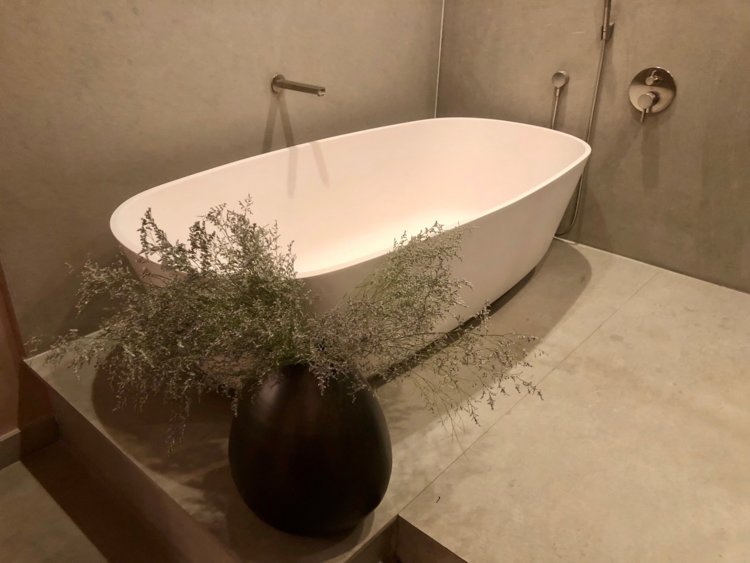 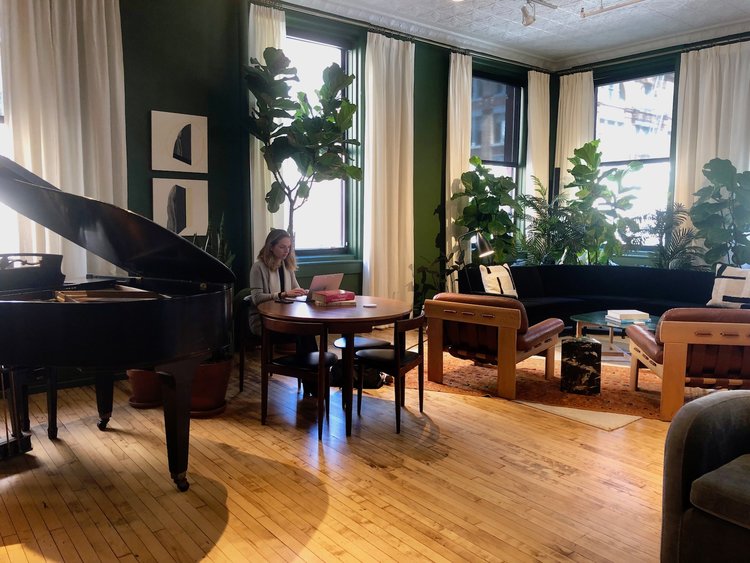 “We’re creating this really powerful network that didn’t exist, bringing different industries and backgrounds together — the space is where we come together,” Childers said. “The space is a house for that community. The space is secondary.”

While Chief isn’t something I would currently pay for at this moment in my life, I wouldn’t rule it out in the future if I were seeking meaningful connections, a community, or new ways to grow in my career. While the price can be steep if you’re paying out of pocket, I think it’s worth it if you can afford it — Chief’s main perk isn’t its space, but the group of passionate individuals it can connect you to.

DON'T MISS:Female CEOs are paying up to $8,000 for executive coaching sessions in a swanky new NYC 'clubhouse' — and there's already a 3,000-person wait list

SEE ALSO:Forget the Upper East Side — Manhattan's richest neighborhood is all about subtle wealth, and it shows a major evolution in how the elite are living