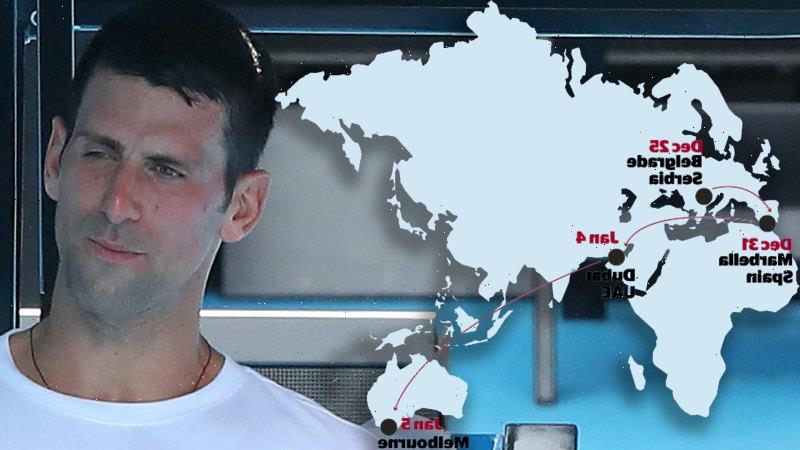 Australian immigration officials are now looking into a series of errors and discrepancies relating to Novak Djokovic’s COVID-19 test and travel after the tennis star apologised for taking part in a media interview while knowingly positive with coronavirus.

The Sydney Morning Herald and The Age can reveal the Department of Home Affairs’ investigation into the tennis star has widened to include his breach of isolation requirements in Serbia, the incorrect statements on his travel entry form and inconsistencies on the date of his COVID-19 test.

Immigration Minister Alex Hawke is separately considering whether to cancel Djokovic’s visa on the grounds that prior infection of COVID-19 in the past six months is not a valid exemption for being unvaccinated. But Mr Hawke could also consider whether to cancel the Serbian star’s visa on character grounds, informed by the Home Affairs probe. 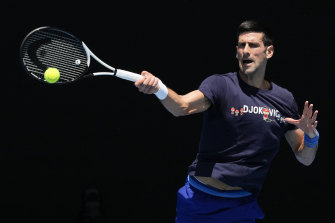 Novak Djokovic has admitted to attending an interview with a journalist while knowingly COVID positive. Credit:Mark Baker

Mr Hawke was to decide whether to use his personal power to deport the Serbian star on public health grounds as early as Wednesday, but Djokovic’s lawyers submitted additional information that will draw out the process longer than expected.

The documents sent by Djokovic’s lawyers to Australian government solicitors included evidence to support the player’s claim that a prior COVID-19 infection is grounds for a medical exemption. The file included journal articles supporting the validity of this medical dispensation.

The world No. 1 on Wednesday apologised for an “error of judgement” for taking part in a media interview a day after receiving a positive test and admitted that his Australian Travel Declaration form incorrectly stated he had not travelled in the 14 days prior to arriving in Australia despite being in Spain.

Concerned that the saga was dragging on, some MPs within the Morrison government want the Immigration Minister to make a decision sooner. But federal sources who spoke on the condition of anonymity said Mr Hawke was intent on going through the proper process even if that meant it went on for days.

In a lengthy post on Instagram, Djokovic said he received a positive result on the night of December 17 after submitting the test the day before. But in his sworn court affidavit Djokovic said he was “tested and diagnosed” on December 16.

Home Affairs is now looking into this discrepancy, and the penalty for giving false evidence under the Crimes Act is a prison sentence of five years.

The department is also probing fresh questions over whether Djokovic’s positive result for COVID-19 was manipulated after inconsistencies emerged about the timing and result of his PCR test.

In his Instagram post he went on to say he “felt obliged” to go ahead and conduct an interview with French media organisation L’Equipe on December 18 because he “didn’t want to let the journalist down, but did ensure I socially distanced and wore a mask except when my photograph was being taken”.

“While I went home after the interview to isolate for the required period, on reflection, this was an error of judgement and I accept that I should have rescheduled this commitment,” he said.

Djokovic said he was making the social media post to address the “continuing misinformation about my activities and attendance at events in December in the lead up to my positive PCR COVID test result”.

He said he attended a basketball game in Belgrade on December 14, after which it was reported there had been a number of people at the event who tested positive with COVID-19.

“Despite having no symptoms, I took a rapid antigen test on 16 December which was negative, and out of an abundance of caution, also took an official and approved PCR test on that same day,” Djokovic said.

“The next day I attended a tennis event in Belgrade to present awards to children and took a rapid antigen test before going to the event, and it was negative. I was asymptomatic and felt good, and I had not received notification of a positive PCR test result until after that event.

“The next day, on 18 December I was at my tennis centre in Belgrade to fulfil a long-standing commitment for a L’Equipe interview and photoshoot. I cancelled all other events except for the L’Equipe interview.”

Serbia’s Prime Minister Ana Brnabic told the BBC that if Djokovic went out knowing he had a positive PCR result, it would be a “clear breach” of Serbia’s rules.

“If you’re positive you have to be in isolation,” Ms Brnabic said.

“I do not know when he actually got the results, when he saw the results, so there is some grey area… the only answer to this can be provided by Novak.”

The Serbian tennis star had been criticised for days over photos that showed he had been attending public functions in the days immediately after contracting COVID-19.

Despite the public outcry over the revelation, it may be his concession that his entry form was incorrectly filled in could pose greater consequences.

Djokovic said his agent “sincerely apologises” for the “administrative mistake”.

In his social media post, Djokovic also confirmed that his Australian Travel Declaration was submitted by “my support team on my behalf – as I told immigration officials on my arrival”.

He said his agent “sincerely apologises for the administrative mistake in ticking the incorrect box about my previous travel before coming to Australia”.

“This was a human error and certainly not deliberate. We are living in challenging times in a global pandemic and sometimes these mistakes can occur.

“Today, my team has provided additional information to the Australian government to clarify this matter.”

A spokesperson for Mr Hawke said on Wednesday the Serbian tennis star’s lawyers had “recently provided lengthy further submissions and supporting documentation said to be relevant to the possible cancellation of Mr Djokovic’s visa”.

“Naturally, this will affect the timeframe for a decision,” they said.

On top of the two concessions, Djokovic on Wednesday also faced fresh questions over whether his positive result for COVID-19 was manipulated after inconsistencies emerged about the timing and result of his PCR test.

Djokovic gained entry to Australia on the basis that he had a positive test for COVID-19 on December 16, which he claimed gave him a valid exemption for being unvaccinated. But data in the test result URL from the Institute of Public Health of Serbia, linked in the QR code provided to Border Force as part of Djokovic’s visa application, suggests it is timestamped December 26.

Australian cyber security experts said there may be a valid explanation for the discrepancies, first revealed by German publication Der Spiegel, but there are legitimate questions to answer.

Robert Potter, co-CEO of cyber security firm Internet 2.0, confirmed there were inconsistencies between the timestamps in the documentation Djokovic presented to Border Force officials, and the URL linked to the QR code on one of Djokovic’s tests.

“I can’t interpret the medical implications but I’d say there is sufficient evidence to question the fidelity of his paperwork submitted to the Australian government relating to his positive test,” Mr Potter said.

“The time stamp contained within the QR code of his positive test does not match the paperwork as submitted. However, the timestamp of his negative test does match his submitted paperwork. As long as you are confident that the QR codes you have sent me for evaluation match those submitted to the Australian government, then I’m confident saying that Djokovic has legitimate questions to answer.”

The German cyber group said a “plausible explanation” for the timestamp discrepancy had come to light, but not for the discrepancy around the confirmation codes.

Pointing to web postings by Serbian users of the HackerNews forum, it was theorised that timestamps in the QR code and its linked URL were regenerated when the PDF was downloaded with a result. This could mean, for instance, that Djokovic or someone on his behalf re-downloaded one of his results on December 26. 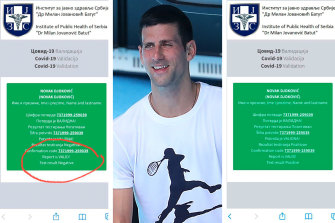 “This explains the inconsistencies in the timestamps – but not in the confirmation codes – because they remain the same,” zerforschung wrote in a detailed blog post update and on Twitter.

The Federal Circuit Court on Monday ordered, with the consent of both parties, that Djokovic’s visa should be reinstated because he was not given enough time to prove he had a valid COVID-19 vaccine exemption when he arrived in Australia last week.

The federal government insists it was right to cancel Djokovic’s visa last week on the basis that a prior COVID-19 infection in the past six months is not a valid reason to have an exemption for being unvaccinated. The court never ruled on that question because the federal government conceded it did not provide Djokovic procedural fairness.

Djokovic spent several nights in immigration detention after he was detained on January 6 and his visa was cancelled because he was not vaccinated and did not have a valid exemption. He has since been training at Melbourne Park ahead of the Australian Open, where he has been drawn as the no.1 seed.

The Serbian star holds the record for most men’s Australian Open singles titles with nine wins, and is bidding to win his 10th.