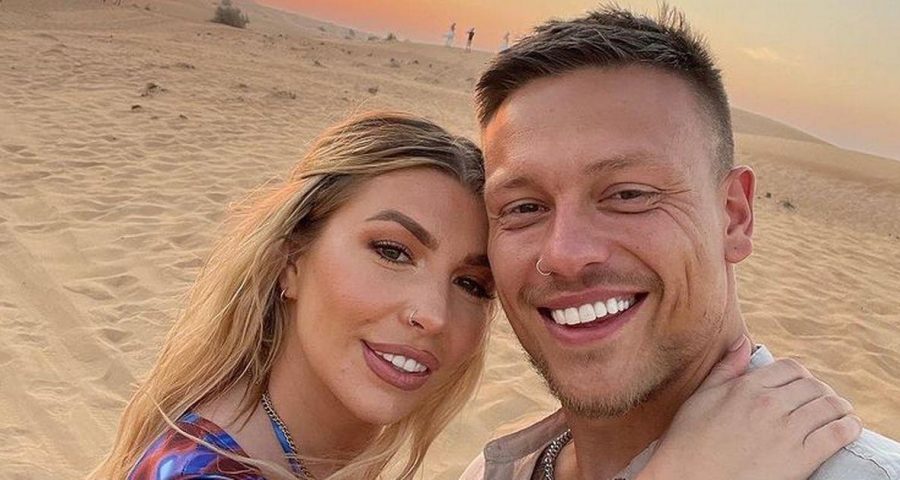 Love Island stars Alex and Olivia Bowen have announced that they are set to welcome their first baby together in 2022.

Alex, 30, and Olivia, 28, recently took to Instagram to tell their fans the happy news, which comes after they met on the hit ITV show back in 2016.

The loved-up pair have been inseparable ever since they first met and have now been an item for over five years.

The Bowens have amassed a huge fanbase since coming in second place on Love Island, with many continuing to follow the couple's romance via social media.

As Alex and Olivia get set to take the next step in their relationship, here we take a look back through their incredible love story…

Back in July 2016, Olivia and Alex both starred in the second series of hit ITV reality show Love Island.

Olivia, who was part of the original line-up, had failed to find a connection with any of her fellow islanders until Alex entered the villa halfway through the series as a bombshell.

While they were originally coupled up with other people, the pair were drawn to one another and soon fell in love.

Alex and Olivia eventually came in second place on the show, with Nathan Massey and Cara De La Hoyde taking the top spot.

The loved-up pair have become one of the most popular couples to come out of Love Island, and have both amassed a huge following on social media thanks to the show.

While leaving the Love Island villa and returning to reality marks the end for the majority of couples from the show, Olivia and Alex went from strength to strength when they returned to England together.

A couple of months after their reality TV stint they got matching tattoos, and by October 2016 they announced that they'd moved into their first home together.

Olivia and Alex moved in together in Essex, and soon jetted off on their first ever holiday together as their budding romance continued to go from strength to strength.

In December 2016, they announced that they'd taken the next step, and welcomed their first dog together, who they named Reggie.

2016 was a huge year for Olivia and Alex and after moving in together and welcoming their first dog, and they ended the year with a lavish trip to New York City.

They jetted off to celebrate Olivia's upcoming January birthday, and romantic Alex turned it into a double celebration when he got down on one knee on New Year's Eve.

The couple soon announced their engagement, with Love Island fans everywhere flocking to congratulate them.

Olivia and Alex partied the night away in NYC as they celebrated the happy news, with Olivia flashing her huge diamond ring in a series of snaps.

Olivia opened up about the romantic proposal recently, admitting their celebrations included crazy antics that resulted in them being “chucked off” a yacht during the trip to New York.

The couple first got matching king and queen tattoos shortly after they left the Love Island villa, but that was just the beginning.

In May 2017, Olivia and Alex unveiled their second matching tattoo, having had each other's initials inked on their wedding finger as they prepared to tie the knot.

Later that same year, they both appeared on MTV show Just Tattoo Of Us, where they could design tattoos for each other without the other knowing.

Alex had a cartoon of Olivia sitting on top of a cow designed which was then tattooed on her thigh, while Olivia chose a 'cry baby' cartoon of Alex for him to have inked on himself.

Having lived together for over a year, Olivia and Alex took the plunge and purchased their first ever home together in 2017. The couple soon began transforming the property, and created their perfect home together.

Olivia gushed over the property, explaining how it was a home she'd loved since she was little.

She told her Instagram followers at the time: "We used to drive past the older development of these houses, me and my Mum when I was little, I would stare at them and wish I could live in a house like that when I got older, but I was always thinking to myself that wouldn't happen.

The Love Island couple's wedding had been carefully planned for just under two years, and in September 2018 they finally tied the knot.

Alex and Olivia's wedding day was incredible, and the pair shared a series of snaps from the nuptials with their loyal fanbase on social media. Olivia wowed in a white lace gown and veil, and in the run-up to the wedding had appeared on Say Yes to the Dress with fashion designer, David Emanuel.

The newly married couple then jetted off to the Maldives for a lavish honeymoon.

Having both worked with numerous clothing brands since finding fame on Love Island, Olivia and Alex launched their own brand in 2018.

Alex initially started the clothing line, called Exempt Society, as a men's clothing brand, but soon wife Olivia got onboard and they expanded it to womenswear too.

Their stylish brand boasts 79,900 followers on Instagram, and has become a popular choice for many online shoppers.

In February 2020, Alex and Olivia excitedly announced that they'd purchased their dream home together, a luxurious £1million mansion in Essex.

The couple have been busy completely transforming the sprawling property ever since, and have even set up an Instagram account dedicated to their home renovations, @thebowenhome.

The lavish mansion boasts several bedrooms and a huge garden, and Olivia's stylish decor tastes have even seen her land her own homeware line with online fashion giant In The Style.

The Bowens kicked off 2022 with the happy news that they're expecting their first baby together.

Taking to Instagram on New Year's Day, Olivia and Alex revealed the exciting news with an adorable post featuring three polaroid pictures and a pair of tiny knitted baby boots.

In one snap Alex could be seen kissing Olivia's growing bump, while another showed a tiny white baby grow with the words "Baby Bowen" written across the front.

Alex then shared the same photo, along with the words: “This year we get to meet Baby Bowen."