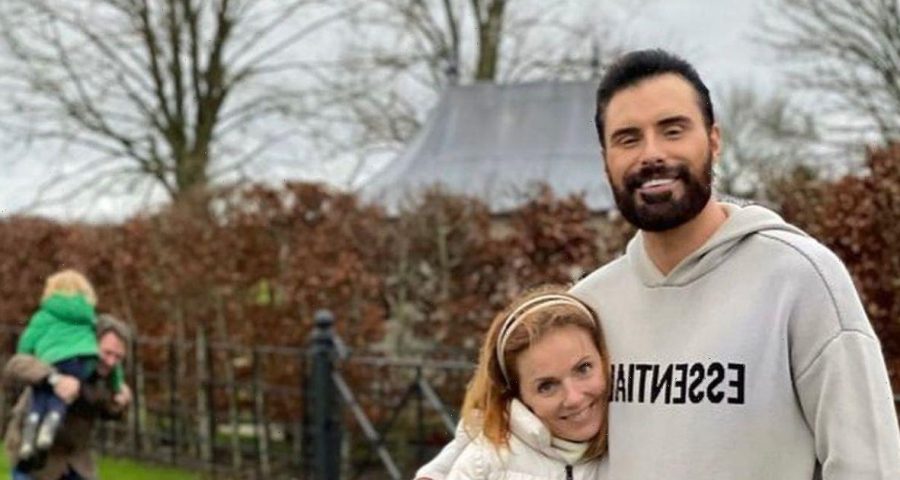 Rylan Clark has given a glimpse inside his staycation with Geri Halliwell and her husband Christian Horner at their sprawling Oxfordshire home.

The 33 year old TV presenter, who recently revealed his secret feud with a mystery actor who he wanted to 'punch', has shared a glimpse inside his trip to stay with Spice Girl Geri, 49, and her husband 48 year old Christian.

Rylan posed with Geri in the gorgeous garden and towered over the singer, who is 5ft, while the It Takes Two host measures 6ft 3ins.

Geri donned her signature white attire consisting of a puffer coat and trousers while Rylan opted for a grey hoodie and jeans for the outing.

The former X Factor star appeared to get stuck into life on the country estate, near Banbury, as he posed with the sheep alongside Christian and his four year old son Montague.

Meanwhile Geri and Rylan could not resist showcasing their musical talent as the Ginger Spice singer took to the drums while the TV star grabbed the electric guitar to play a cover of Seven Nation Army by The White Stripes.

Rylan joked that the pair along with Christina and Montague could be the next 'Eurovision 2022'.

Elsewhere the group continued with the festivities as they enjoyed a roast in a grand dining room in front of the huge real Christmas tree.

Bluebell, 15, the daughter of Geri and her ex Sacha Gervasi, could be seen at the table which was covered with plates of food and poinsettia plants.

Rylan and Geri presented This Morning together in 2018 after the Big Brother winner was allowed to choose who he presented the ITV daytime show with on a Bank Holiday.

The TV presenter was asked by OK! in March if he ever gets 'starstruck' and revealed: "I used to. When I got to present This Morning with Geri Halliwell in 2017 I did. Geri has always been my favourite Spice Girl.

"The night before, I was going through an old box of stuff I’d saved from school because I’d just moved house. I happened to find my Business Studies folder from Year 9.

"One project was to make tickets to an event. I made tickets which said “Ross and Geri Live”. Ross is my real name. We were only a fiver a ticket."