A major private hospital provider is warning operations will be cancelled amid a standoff with insurers over who should pay for common surgical items such as staples, sponges and glues.

Catholic Health Australia health policy director Caitlin O’Dea said the products were used in more than 85 per cent of operations and estimated the group would lose $100 million a year across its 85 hospitals if insurers were no longer required to cover their cost. 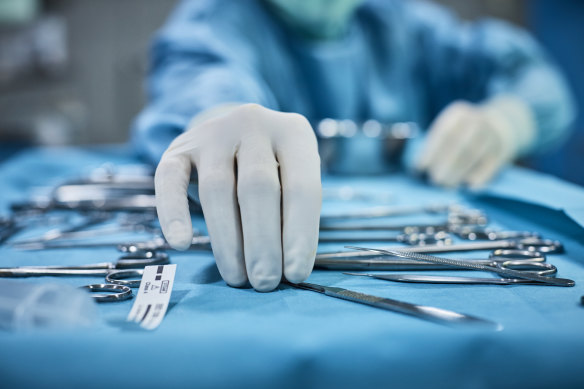 More than 400 common surgical items will be removed from the list used to set the prices health funds pay from July 1.Credit:iStock

“Not-for-profit hospitals have no other bucket of money that can cover this,” O’Dea said.

“Procedures will be withdrawn, regional services will shut down. This will heap pressure on public hospitals. It’s a disaster.”

More than 400 “general consumables” were removed from the prostheses list from July 1 under changes outlined by former health minister Greg Hunt in May last year. The government uses the list to set the prices health funds must pay for items ranging from replacement hips to medical sponges.

O’Dea said the changes would let insurers “off the hook” with the biggest effect on caesarean births and surgery for breast and ovarian cancer.

The average breast cancer surgery used $500 of items that would no longer be on the list, she said, including a product that binds tissue and stops bleeding. The added cost would make the procedure “unviable” for many hospitals.

For the average bariatric surgery, a procedure done almost exclusively in the private system, the extra cost was almost $4000.

Hunt struck a deal with medical device manufacturers in 2017 to progressively lower the prices of their products, including knee and cardiac implants, used in private hospitals to ease pressure on insurance premiums.

Every $200 million reduction in costs for health insurers is equivalent to a 1 per cent premium decrease, according to the Department of Health.

The latest changes were announced in the May 2021 federal budget, which forecast $900 million of savings over three years. The annual cost of the items hit $2.1 billion in 2020-21.

CHA wants Health Minister Mark Butler, who has pledged to honour the agreement signed by his predecessor, to overhaul the next stage of the changes and keep the 400 consumable items on the Prostheses List.

In a statement, Butler said he was talking to stakeholders to understand what Hunt had agreed to regarding the list.

“The government’s priority is that people can access affordable medicines, treatments and medical devices and that the Australian taxpayer gets value for money, both in the public system and through our support for private health insurance,” he said.

Private Healthcare Australia policy and research director Ben Harris said the items hospitals were fighting over should not be funded through a “wildly inefficient” pricing mechanism such as the Prostheses List.

“These items should be paid for as part of general theatre expenses,” he said.

“Hospitals don’t get specific payments to keep the lights on during surgery or to use a scalpel. Specific funding for sponges and staples just don’t make sense.”

Harris said private hospitals might be resisting the change to protect confidential rebates from device manufacturers for bundles of products.

The Health Department’s Clinical Implementation Reference Group and a report it commissioned from accounting giant EY found the items could be removed from the list with no adverse clinical outcomes, as long as they were still available for use by doctors under a different funding agreement.

Hunt wrote to CHA on April 5, shortly before the federal election was called, saying an alternative funding mechanism would be developed to ensure consumers were protected from extra out-of-pocket costs and still had access to clinically necessary items.

But no mechanism has been created and insurers have been unable to reach agreement with hospitals after offering block funding for a reduced amount.

Consumers Health Forum chief executive Dr Elizabeth Deveny said she was concerned patients would face higher out-of-pocket costs for surgery if there was not an alternative way for these items to be funded.

“The level of funding for these items needs to cover the price that hospitals have to pay, otherwise hospitals will simply stop using them,” she said.

Medical Technology Association of Australia chief executive Ian Burgess said he had serious concerns the change would increase patients’ out-of-pocket costs as insurers were likely to refuse to pay for items removed from the list.