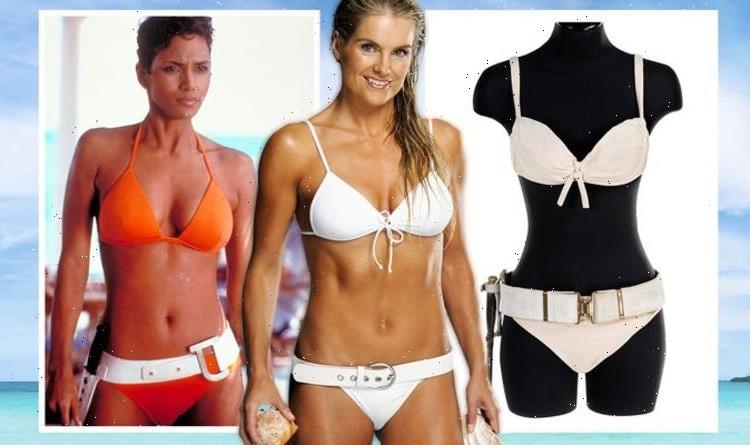 It was itsy bitsy, teenie weenie and has been viewed as seductive and scandalous in equal measure ever since, sometimes hailed as empowering, at others condemned as degrading. Is there any fashion item that more definitively represents the 20th century and its recurring themes of emancipation, sex and style? Almost certainly not. There are Roman mosaics from as far back as Pompeii depicting girls in two-piece costumes. But the bikini as we know it dates back to a French car engineer called Louis Réard, who inherited his mother’s lingerie business and became a clothing designer instead of motoring expert.

The notion came to him while he was sunbathing on St Tropez beach and noticed women rolling back the tops and bottoms of swimsuits to tan more of their midriffs.

Strictly speaking, he wasn’t the first to come up with the idea.

Two months previously, another French designer, Jacques Heim, had unveiled a two-piece swimsuit, which he named the “Atome” and advertised as “the world’s smallest bathing suit” – a daring variation on previously much more conservative and modestly cut two-piece designs. He even hired skywriters to fly above St Tropez fluttering that slogan behind them.

The crucial difference between Heim’s design and Réard’s was that the bottoms on the latter’s were low cut enough to expose the wearer’s navel. Then, baring the belly button was seen as daring, verging on indecent.

Making a virtue of the post-war clothing shortage, Réard’s was a string bikini with four triangles of fabric made from a mere 30 square inches of material.

But when he sought out his usual models for the planned debut of his swimsuit, they recoiled. It was considered far too risqué.

Undeterred, Reárd went to one of the French capital’s best-known dance halls, the Casino de Paris, where he met 19-year-old Micheline Bernardini, a nude dancer. Unsurprisingly, she had less compunction about modelling the design.

Four days prior to Réard’s swimsuit being revealed to the public, the United States conducted its first nuclear weapons test at Bikini Atoll, a tiny group of coral reef islands in the South Pacific Ocean. The event gripped the world’s media – a point not lost on the shrewd Réard, who sought similar publicity. For that reason alone, he announced that his creation was to be called the bikini.

When Bernardini stepped on to the catwalk built at Paris’s Art Deco public swimming pool, the Piscine Molitor, on July 5, 1946, the same media took the hint, with one obligingly labelling the design the “atom bomb of fashion”. They marvelled at the 2in by 2in box Bernardini held up as she posed, in which the bikini was said to fit.

Réard, meanwhile, cheekily took a leaf out of rival Heim’s book and also flew planes over St Tropez, trailing the message: “smaller than the smallest bathing suit in the world”.

Sales rocketed instantly. While Heim’s design might have come first, it was Réard’s that captured the public imagination, helped by his unerring eye for publicity, not least his next claim that it wasn’t a genuine bikini “unless it can be pulled through a wedding ring”.

But many countries, especially Catholic ones such as Italy and Spain, instantly banned bikinis from beaches. So did France and Australia. It probably didn’t help that Réard said his design “reveals everything about a girl except for her mother’s maiden name”.

In Germany, bikinis were not allowed in public swimming pools until the 1970s.

The staid US was similarly unimpressed.

Bellybuttons were banned from display in Hollywood films. The American magazine, Modern Girl, sniffily declared: “It is hardly necessary to waste words over the so-called bikini since it is inconceivable that any girl with tact and decency would ever wear such a thing.”

As well as being the man who introduced ballroom dancing to the BBC with his original Come Dancing programme, a rising star in the world of entertainment called Eric Morley quickly saw the design’s potential.

He had adapted traditional seaside beauty contests into fashion shows at his Mecca organisation’s dance halls. Now he masterminded a televised national pageant the press dubbed Miss World – first held in 1951 during the Festival of Britain exhibition.

Yet after its winner, Swede Kiki Hakansson, wore a bikini for the event, it was condemned as sinful by Pope Pius XII, causing many countries to threaten to withdraw from future competitions.

To this day, Hakansson remains the only Miss World winner to be crowned in a bikini. At the other end of the spectrum, Communist groups denounced the outfit as “capitalist decadence”.

The bikini became associated with “naughty girls”. Brigitte Bardot, then 19, was photographed wearing one at the 1953 Cannes Film Festival. Her British counterpart, Diana Dors, had a mink bikini made for her at the Venice Film Festival two years later, displaying it while riding in a gondola.

By 1959, even Spain’s strait-laced dictator General Franco had been persuaded by the mayor of Benidorm that the bikini should be legalised in his town to attract the lucrative emerging package holiday boom.

The new beach fashion was boosted by Brian Hyland’s Itsy Bitsy Teenie Weenie Yellow Polkadot Bikini when it became a summer No1 in the UK in 1960. Playboy first featured a bikini on its cover in 1962.

And in the same year, the first James Bond film Dr No featured actress Ursula Andress, emerging from the sea in a white costume, knife tucked into a wide belt.

She said later: “This bikini made me a success. I was given the freedom to take my pick of future roles and to become financially independent.”

The first Lycra bikini in 1964 revolutionised the design – previously made of cotton and jersey – making it less likely to sag, and better to both conceal and reveal.

But the most memorable bikini of the decade was still to come: the image of Raquel Welch in an animal skin version in the 1966 box office sensation One Million Years BC. It would become one of the century’s best-selling pin-ups.

One-piece swimsuits made a comeback in the 1980s and 90s as the allure of the bikini temporarily faded. But the 21st century has seen its resurgence, helped by the introduction of beach volleyball – played in bikinis – to the Olympics in 1996. They now contribute to a global swimwear market valued at more than £13billion in 2017.

Lauren Goodwin-Grafton, fashion editor of OK! and New magazines, says: “As Love Island returns to our screens, it seems a fitting time to celebrate the bikini’s birthday.

“There aren’t many women today who haven’t worn one at some point in their lifetimes. Now no one bats an eyelid, and it’s hard to believe the controversy it once caused.

“The latest swim trend leaves even less to the imagination, with ‘under boob’ being the latest fad. Imagine the horror that would have caused in the 1940s?”

American author Kelly Killoren Bensimon, who has written its history in The Bikini Book, claims: “The bikini is emblematic of freedom. It’s about fun, it’s about play, it’s a lifestyle.

“The bikini is associated with scandal and that’s why it survived.”

Louis Réard went on to open a bikini shop in Paris which he ran for 40 years. He died in 1984, aged 87. And the bikini’s first model? Micheline Bernardini is still living in Paris, aged 93.