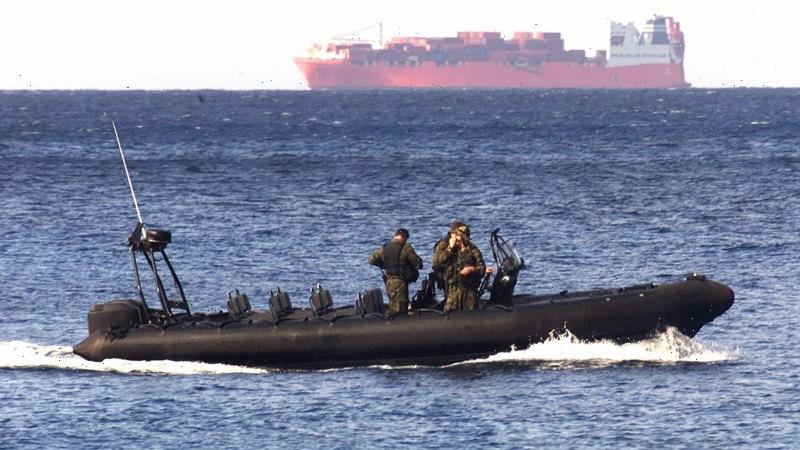 John Howard was warned just weeks before the Tampa affair of an impending flood of boat arrivals which would exhaust Australia’s detention capacity and place major strain on existing security resources ahead of a summit of international leaders in Brisbane.

Secret documents given to federal cabinet in 2001, released after two decades on Saturday by the National Archives of Australia, show confidential contingency plans were drawn up to deal with intelligence reports suggesting an increasing pool of 6500 asylum seekers in the “smuggling pipeline” was awaiting passage across the seas. 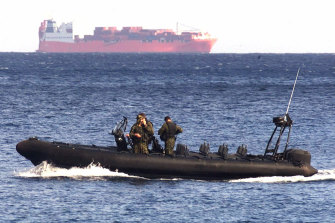 An Australian Army vessel patrols the waters near the Norwegian freighter Tampa in 2001. Credit:AP

They also warn of the need for a “demonstrated commitment” from the federal government to border security to both reassure the Australian community and send a clear message to “potential future arrivals” and existing immigration detainees.

The asylum-seekers were rescued by a Norwegian container ship, the Tampa, and its captain, Arne Rinnan, set course for the Indonesian city of Merak, the closest port with facilities to dock such a large vessel. However, some of those rescued threatened to suicide if they were returned to Indonesia. Other passengers entered the ship’s bridge and told Rinnan to take them to Christmas Island.

But Howard refused to allow the Tampa to land any of the asylum-seekers, saying it was in Australia’s national interest that “we draw a line on what is increasingly becoming an uncontrollable number of illegal arrivals in this country”.

Many of the asylum-seekers on board the ship were in poor health and the ship passed Australia’s maritime boundary shortly before midday on August 29.

It would spark eight days of high drama culminating in SAS troops boarding the ship after it entered Australian waters. The crisis, coupled with the September 11 terrorist attacks on the United States, would play a critical role in the Howard government’s re-election campaign two months later.

Several cabinet papers relating to the period, including those dealing with costs of a legal action relating to prospective unauthorised arrivals on the Tampa, remain classified.

The documents present a range of measures to ensure an “effective logistical response” should there be a sustained increase in arrivals or a large one-off spike in numbers.

Minutes of the meeting note that cabinet agreed a group, chaired by Department of Premier and Cabinet secretary Max Moore-Wilton, should explore Australia’s legal capacity to “turn vessels around and escort them back to the point of embarkation in Indonesia”.

Intelligence agencies had also provided advice that people smuggling syndicates targeting Australia were considering the use of large vessels to travel from south-east Asia, including one uncorroborated report of transporting 3000 boat people.

“The image of the arrival of a large vessel containing even 1000 unauthorised boat arrivals will place Australia in the international spotlight and further focus domestic and international scrutiny on Australian immigration policies, including the mandatory detention of unlawful non-citizens,” the submission says.

It also warned that boat arrivals were putting a strain on Australian Federal Police and intelligence agency resources which would need to be diverted towards security arrangements for the Commonwealth Heads of Government Meeting in Brisbane, which would later be cancelled following the September 11 attacks on New York’s World Trade Centre and the Pentagon in Washington.

The report details plans for an expanded facility in Darwin to accommodate new arrivals as well the use of tents at the El Alamein site between Wyalla and Port Augusta. It said preparation would be kept low-key given “sensitivities in contingency plans are made public”.

It also identifies Defence facilities at Singleton in northern NSW and Portsea in Victoria as potential sites for temporary accommodation, but warned there would be a cost if people were housed in tents for too long.

“Detaining unauthorised boat arrivals in tents beyond a week or two would give rise to very significant security, safety and health issues for both detainees and those persons responsible for their care,” the documents says.

“The use of tents on anything other than an emergency basis would draw sharp criticism from opponents of Australia’s mandatory detention regime.”

The tough new border measures and the Tampa crisis bolstered the Howard government’s lagging performance in the polls, with a survey by The Sydney Morning Herald finding 77 per cent of Australians were in favour of the way Howard handled the situation. 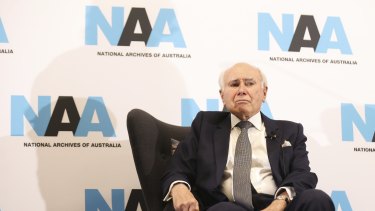 Former prime minister John Howard has never backed down from the hardline position he took on the Tampa affair.Credit:Alex Ellinghausen

John Howard continued to defend his approach ahead of the release of the papers.

While Howard acknowledge the measures were controversial, he said the relaxation of his border security measures by his successor Kevin Rudd proved that lives were saved as a result.

“It’s not something you can have both ways,” he said. “If you have an optimistic view about the capacity of this country to continue to take in large numbers of migrants and also our sizeable humanitarian program, you have to always remember that the maintenance of those two things depends crucially on the acceptance of the Australian public on immigration.”

The handling of the Tampa affair and implementation of the subsequent Pacific Solution attracted international criticism, but in the six years from 2002 only 23 boats arrived in Australia compared to 43 carrying more than 5000 asylum-seekers in 2001 alone.