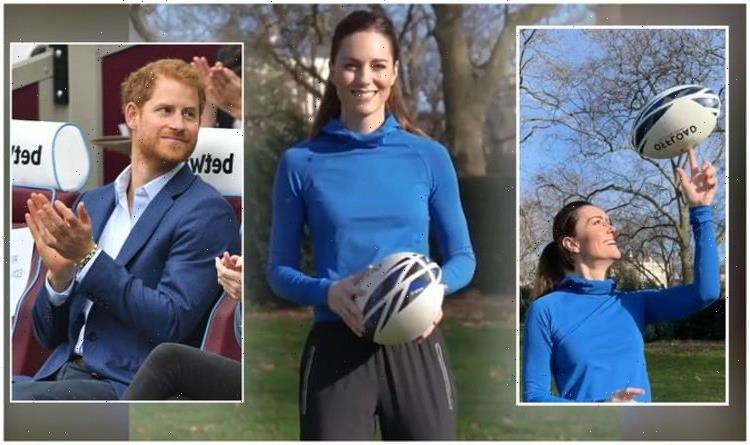 Duchess of Cambridge becomes Patron of RFL and RFU

Kate Middleton appeared in a new video released on social media by England Rugby. The Duchess of Cambridge can be seen effortlessly passing a rugby ball between her and other players. One scene even saw Kate managing to spin the rugby ball on her single finger.

She appeared to be wearing a pair of Nike Swift 27 running trousers and had her hair tied back in a swift ponytail.

Judi James, a body language expert, spoke exclusively to Express.co.uk about the Duchess’ rugby skills in the newly released video.

Judi said: “Taking over one of her brother-in-law Prince Harry’s most coveted roles and becoming an ambassador of a sport that is often associated with big, burly blokes could have been a controversial decision.

“But in this one simple and silent video Kate skips any body language rituals of apology or awkwardness and throws herself into a very central and confident role in a sport that she clearly loves.

“Her appearance here is ground-breaking in royal terms and a powerful reminder of the danger of stereotypical thinking.

“In the past it has been expected for royal women to only take on a role like this in a figurehead way, turning up at events dressed in smart outfits and hats and shaking a few hands or presenting some cups to the winners.

“In this hugely smart move though, Kate appears in a much more hands-on way, standing legs splayed in a pose of physical confidence and both throwing and balancing the ball like someone who plays the game themselves.

“Her facial expression and her posture suggest open pride at her new role and if there are any qualms about it having been stripped from Harry they are clearly not on display here,” the expert noted.

Judi continued: “This is Kate showing her sporty and competitive side and whoever picked her for the role is something of a genius.

“It also gives her the chance to smash stereotyping in the sporting world by showing a range of other rugby players as the ball is passed around.

“Kate could have looked polite and regal for this launch but in fact, she looks like someone who might have fought for the role rather than just accepted it modestly.

“She signals there will be no hiatus in terms of promotion and motivation of the sport now she’s taken over.

“This was a newly inspirational approach that should open the game up to many new fans and potential players.”

The Duchess has always been passionate about rugby.

Her sister Pippa Middleton expressed many years ago: “Rugby was a big thing for our family.

“The focal point was international matches.”

Both Kate’s father and grandmother were very talented rugby players and so it makes sense why the Duchess would want to take on this role.

She will also now go head-to-head with her husband, Prince William, who is the Patron of Welsh Rugby.

Similarly, Kate’s aunt-in-law, Princess Anne, is the Patron of Scottish Rugby, keeping a healthy amount of competitiveness in the Royal Family.