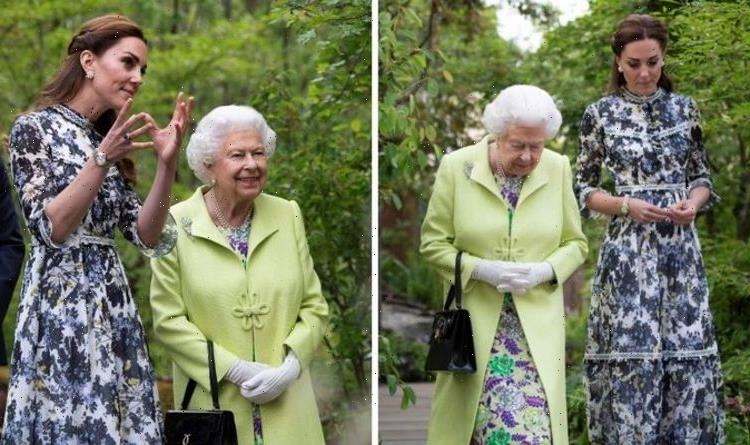 Express.co.uk spoke to body language expert Judi James about the relationship between Queen Elizabeth II and her grandson’s wife Kate Middleton. How does Her Royal Highness feel about the woman who will one day be Queen Consort?

Kate seems to strike a perfect balance between being respectful and subservient towards the Queen and enjoying a friendship with her, the expert claimed.

Judi stated: “On a human note the two women display signals of friendship tinged with, from Kate, a sense of respectful understanding.”

They can often be found picking each other out for “moments of shared fun” during royal engagements, which suggests that the pair have a close bond and “really do get on with one another”.

Judi suggested that the Queen’s relationship with Kate is set apart from her other relationships, as she “rarely” does this with the other members of the family.

During the 2018 Trooping The Colour parade, the Queen and Kate can be seen leaning in towards each other with direct eye contact, with Prince Charles and the Duke and Duchess of Sussex standing behind them.

In a moment of joyous companionship they seemed to only have eyes for one another.

Judi stated: “Their bouts of eye contact are unusually prolonged, signalling a warmth and keenness to communicate.”

But the Queen is undoubtedly the leader within the relationship, Judi suggested.

“Their body poses and movements when they are laughing together seem to suggest it’s the Queen making Kate laugh rather than the other way round.”

Additionally, when the Duchess of Cambridge showed the Queen around the ‘Back to Nature Garden’ garden she had designed for the Chelsea Flower Show, it was clear that she hoped to impress her.

Judi stated: “Kate does treat the Queen as the boss in many ways, looking excited and delighted when she paid a visit to her garden project.”

She used “detailed and rather expert-looking illustrative gestures to show it off to a smiling Queen,” potentially hoping for approval.

However, she always makes sure to adhere to boundaries despite their close relationship.

“Importantly, Kate always treats the Queen in a way that HM seems to appreciate from her daughter Princess Anne, too.”

This is with “absolutely no fussing and no concessions to her age”, despite the Queen nearing 96 years of age.

Kate has stepped up recently, undertaking more royal duties and attending royal engagements when the Queen was taken ill.

For example, she stood at the centre of the balcony for a Remembrance Day service when Her Royal Highness Sprained her back.

However, she appreciates and respects the Queen’s independence.

When out and about during engagements, she does not mollycoddle her or insist on standing beside the Queen.

“Kate never looks poised to offer an arm or any assistance.”

Of course, this would be given if the need arose, but she typically “avoids any non-verbal rituals that might look or feel patronising or over-cautious”.

There is an air of formality between them due to the the Queen’s position, but their love and fondness for each other shines through.