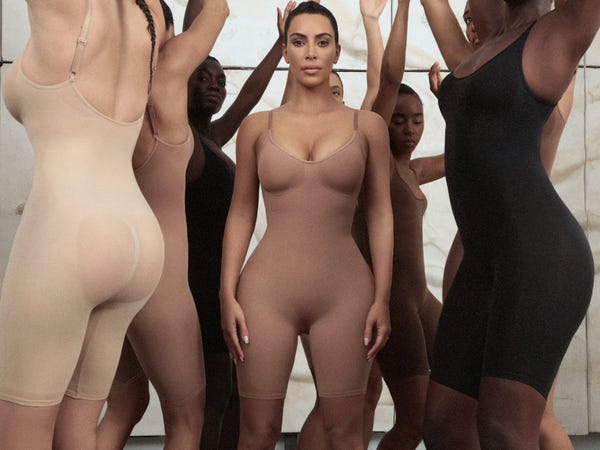 Kim Kardashian West is dropping a new line of products for her SKIMS shapewear brand.

Kardashian West announced an Instagram post on Saturday that a SKIMS maternity line will go on sale starting September 16 at 9 a.m. PT.

What you’ve been waiting for: @SKIMS Maternity is coming soon! Introducing Maternity Solutionwear™ that offers the best in comfort and support for your changing body during and after pregnancy. Launching on Wednesday, September 16 at 9AM PT / 12PM ET in 9 colors and in sizes XXS – 5X exclusively at SKIMS.COM. Join the waitlist now to receive early access to shop.

"Introducing Maternity Solutionwear™ that offers the best in comfort and support for your changing body during and after pregnancy," Kardashian West captioned the Instagram post.

She revealed in the caption that the products in the Maternity Solutionwear line which will be available in nine colors and sizes XXS to 5X at SKIMS.com, and that shoppers can join the waitlist now for early shopping access.

"I wish there was shapewear like this when I was pregnant. There were some options but I don't know — nothing like this," Kardashian West said while showing off her new line in her Instagram story.

On Kardashian West's Instagram story, she gave a preview of products in the Maternity Solutionwear line, including a $42 Maternity Nursing Sculpting Bra.

She also shared the product details for her $64 Maternity Mid Thigh Bodysuit, pictured below.

"It's not compressing on your stomach which is really important because you obviously don't want to do that," Kardashian West said of the thinner fabric used on the stomach in her Instagram story.

"But you want to shape everything else around it," she added.

The SKIMS Instagram account noted in a comment that the Maternity Mid Thigh Bodysuit, as well as the brand's similar maternity pair of briefs, include an open gusset, or slit in the fabric, so pregnant wearers do not have to take off the shapewear when using the restroom.

In response to a question from a user who asked if the Maternity Solutionwear is safe to wear during all trimesters of pregnancy, the official SKIMS account responded on Instagram, saying it's safe to do so.

Some expressed excitement to try the undergarments themselves.

"We so needed this!!! Especially for my next pregnancy!!" one user commented on the SKIMS founder's Instagram post.

Some fans stated that they think maternity-centric shapewear could be useful during pregnancy.

"I wore something like shapewear while I was pregnant and it helped with my back pain by keeping everything tight," another Instagram user commented.

Other Instagram and Twitter users appeared to question the need or practicality of shapewear for pregnant bodies.

"Why would you need shapewear while pregnant? I always fully embrace it," another Instagram user commented.

"Girl I can barely get mine over my stomach and I'm not pregnant smh," one user wrote of the fitted garment on Instagram.

Some people clapped back at critics of the line — saying that they see the Maternity Solutionwear as a way to make pregnant people feel more comfortable, not necessarily look a certain way.

"Skims isn't only shapewear, it's become an underwear brand and what do pregnant women need? Underwear that comfortable around their changing shape," another Twitter user wrote.

Kardashian West has yet to publicly respond to those who questioned the purpose or message behind the products, and representatives for SKIMS did not immediately respond to Insider's request for comment.

Kardashian West initially launched her shapewear brand under the name Kimono in June 2019. However, she changed renamed it as SKIMS and apologized after many people commented that the name disrespectful to the Japanese culture.

In May of this year, Kardashian West launched a line of SKIMS face masks that had a black mask in the color "Onyx" as a nude option for darker skin tones. Some social media users criticized the black mask as not being an accurate shade of nude for dark-skinned people.

Kardashian West did not directly address the backlash about the color of the mask, but the SKIMS model who wore the mask in the campaign defended the SKIMS founder, saying: "There was no moment that I felt like I was disrespected."