At long last, some purr-fect news: California mountain lions are in the middle of a baby boom.

These cool cats (check out the video above) are bedding down in the Santa Monica Mountains and Simi Valley in Southern California.

According to the Santa Monica Mountains National Recreation Area, 13 kittens were born to five mountain lion mothers between May and August. It’s the first time so many dens have been found in the area in such a short period of time since scientists began tracking the big cats 18 years ago.

“This level of reproduction is a great thing to see, especially since half of our mountains burned almost two years ago during the Woolsey Fire,” said wildlife biologist Jeff Sikich, who tracks the mountain lion population in the area. “It will be interesting to see how these kittens use the landscape in the coming years and navigate the many challenges, both natural and human-caused, they will face as they grow older and disperse.”

Biologists will monitor the kittens when the moms are out hunting. Mothers typically raise their young for a year and a half. 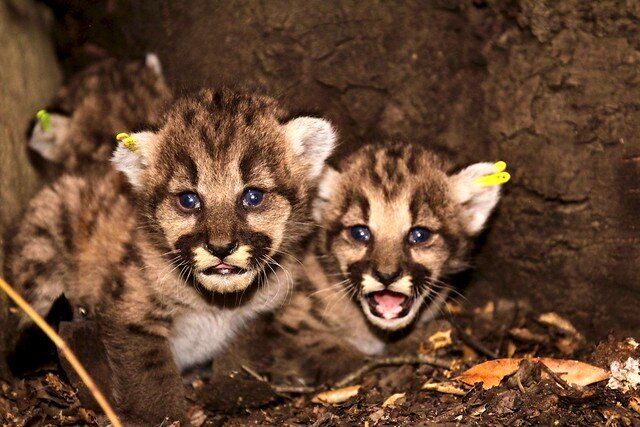 Los Angeles and Mumbai are the only two “megacities” in the world with wild big cats living within the city limits. The Parks Service has tracked some 75 mountain lions in the L.A.-area.

Though this year has been good to the mountain lions, their survival is constantly under threat by development, traffic, toxins, wildfires and lack of access to the vast spaces they need to find mates and food. The cats’ human guardians have been working for years to form and protect access corridors for the animals to travel freely through private lands and across roadways in the increasingly busy region.

Ventura County court formally granted approval this week to conservation groups — including the Center for Biological Diversity, Los Padres ForestWatch, Defenders of Wildlife and the National Parks Conservation Association — to intervene in defense of the county’s first-of-its-kind wildlife passageway ordinance, which was challenged by industry groups.

The California legislature also this week passed a measure, cosponsored by the Center for Biological Diversity, that will help protect the mountain lions. Once signed by Gov. Gavin Newsom (D), the measure will place a moratorium on super-toxic rodenticides until state agencies can develop safeguards to protect wildlife from the toxins.