Victorian Labor MP Julian Hill has launched a scathing attack on the Biden administration, describing the pursuit of Julian Assange as hypocritical and a “political witch hunt”.

Overnight, the United States government moved a step closer to extraditing Assange to face trial over his leaking over the WikiLeaks cables after securing a victory in England’s High Court. 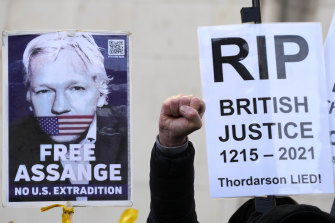 Julian Assange supporters protest in front of the High Court in London on Friday.Credit:AP

Lord Justice Holroyde overturned a previous judge’s ruling that Assange should not face legal proceedings in the US because he might take his own life.

He ordered the court to send his case to Britain’s Home Secretary Priti Patel to determine whether the Australian citizen should be sent to the US.

Assange will remain in Belmarsh prison, and his partner and mother of two of his children, Stella Moris, said his lawyers would appeal the “abusive and vindictive” prosecution.

Mr Hill, who has spoken out about Assange previously and demanded he be brought home, took to Facebook to declare Assange an Australian who was “fighting for his life in London, as the United States seeks his extradition to face an effective death sentence”.

“The hypocrisy of the United States administration is profound and growing. President Biden announced a new initiative on ‘press freedom’ at his democracy summit, yet his government is hounding Assange for journalistic activities.“

“This Australian, who exposed US war crimes, is treated worse than a war criminal. He is not receiving a fair trial. There will never be a legal solution to this case. It is an inherently political witch-hunt. The Australian government must stand up to the US and the UK and stop this extradition.”

Earlier this year, Labor leader Anthony Albanese said he wanted to see Mr Assange freed – even though “I don’t have sympathy for many of his actions”.

Comment has been sought from the opposition leader on whether he agreed with Mr Hill’s criticism of the Biden administration. The Prime Minister’s office has also been contacted for comment on the court’s ruling and Mr Hill’s comments.

“Why does the Australian Government continue to sit idly by when one of its citizens is in such diabolical strife overseas?” he asked.

“Again the United Kingdom proves it’s a lackey of the United States and that Australia is delighted to go along for the ride. The PM must end this lunacy, pick up the phone to his counterparts in the US and UK, and urge them to release Mr Assange immediately and allow him to return to Australia. He is a hero, not a villain, and journalism is not a crime.

“Opposition Leader Anthony Albanese also needs to come out and make it very clear to the community what he would do for Julian Assange if he wins the looming federal election.”

Assange is wanted by the US Department of Justice on 18 counts over the leaking of hundreds of thousands of classified cables more than a decade ago.

His lawyers have argued that his behaviour was that of a journalist, a description that has already been rejected by the British courts. But Assange has also argued, through his lawyers, that he would be at risk of taking his own life if he was moved to a US supermax prison. Earlier this year, a judge accepted this as a valid reason for barring his extradition to the US.

Lawyers for the US government had provided the court with new assurances that Assange would not be held in solitary confinement and, if convicted, could serve his sentence in Australia.

“Assurances of this kind are solemn undertakings offered by one government to another,” Holroyde said.

“The US has now provided the United Kingdom with a package of assurances which respond to the District Judge’s specific findings.”