Melbourne's lockdown has amplified concerns about urban design flaws in outer growth areas, but with the daily commute on pause life in far-flung suburbs has many fans.

Planning expert Michael Buxton says some fringe suburbs are lacking basic amenities and he believes planning regulations need to be overhauled to deliver liveable, walkable and connected communities with jobs close by. 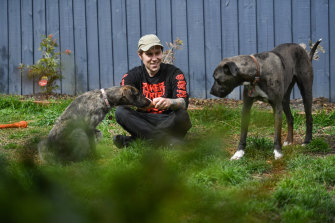 Marcus Schadendorff and his two dogs Duke and Sunny have enjoyed their space.Credit:Joe Armao

The RMIT professor said the COVID-19 lockdown rules for Melbourne residents to stay at home except for essential travel within a five-kilometre range had put pressure on people in new suburbs, which are car-dependent and lack infrastructure.

“Urban design is a critical factor in helping people and cities adjust to crises like the COVID one,” Professor Buxton said.

“In European cities that are much denser than the outer suburbs of Melbourne, people seem to be coping a lot better, because they are living in high-amenity environments.”

His comments are based on a new report by planning group Charter 29, which Professor Buxton led with architects and urban designers Geoffrey Falk, Jim Holdsworth, Mike Scott and Steve Thorne.

The report, Growing Pains: The Crisis in Growth Area Planning, focuses on Clyde North in Melbourne's south-east and Merrifield West in the north. The report found homes in new developments frequently covered 80 per cent of their plot and do not efficiently use space to provide backyards or sunlight.

The authors said the growth suburbs also relied on big shopping malls, which need to be driven to, instead of having high streets dotted with retail that is connected to public transport.

Separately, research commissioned by the National Growth Areas Alliance found that residents in the outer suburbs had withstood working from home better than others. 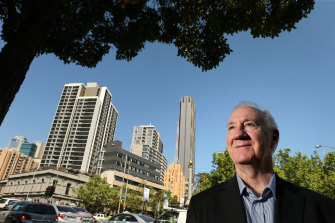 Emeritus Professor Michael Buxton is pictured in the CBD in 2015.Credit:Pat Scala

They reported having more sleep, and were more likely to cope with stress while working from home.

The lockdown has also reduced congestion on roads, and is saving outer residents time and money in long commutes, the alliance found.

Doreen resident Marcus Schadendorff built his first home in Melbourne’s outer-north about four years ago and has seen the suburb develop around him.

Mr Schadendorff’s partner, Alana, started a new job in an essential service after lockdown restrictions began and has been enjoying the congestion-free drive to work.

With two dogs and two cats at home, Mr Schadendorff said he had benefited from a backyard and nearby park.

“If we didn't have our yard and park around us it would be a lot more difficult to be locked down,” he said. “I can't imagine what it would be like for people living in very small apartments.”

Hundreds of thousands of homes will be added to the fringe suburbs in coming decades, and Professor Buxton said that the growth could pose a “significant threat to Melbourne's future viability” unless design and infrastructure improves.

“We’ve made major reforms to our planning system to build more liveable communities and those changes will make a real difference in the coming years,” he said in a statement.

The state government uses the 20-minute neighbourhood concept for new suburbs, to develop accessible and independent communities. Ninety per cent of homes in precinct plans are a 10-minute walk from a town centre and primary school, and a five-minute walk from parkland.

Growing Pains found that Clyde North and Merrifield West were failing VPA objectives, which Professor Buxton said should be enforceable.

The report authors also recommended streamlining the planning system, because there is currently a “bewildering” number of ministers, departments and agencies involved.