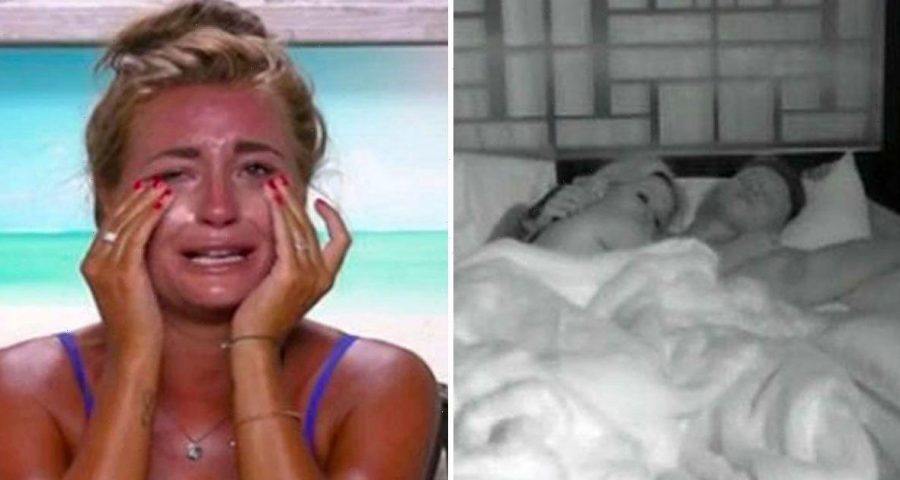 Love Island, nation’s favourite dating show, is back and while fans of the show hope to see beautiful blossoming love stories, viewers can be sure of plenty of controversy too.

In fact, TV regulator Ofcom has investigated tens of thousands of complaints about the show since it started in 2015.

Some of the more shocking moments, which have left fans with their jaws on the floor, have included full-frontal sex scenes when in 2016 Terry Walsh and Emma Jane Woodhams were caught in the act, as well as a romantic marriage proposal by TOWIE’s Jon Clark in 2015.

The explosive coupling-up reality show has got it all. Here’s some of the most dramatic moments over the years so far.

The infamous sex scene happened back in series two when Terry Walsh and Emma Jane Woodhams fell for each other after trying out a few others in the villa. Their developing romance led to an episode of lovemaking without them shielding themselves, which meant their villa-mates and the viewers got a bit more than they bargained for.

Emma later revealed that she had believed ITV would not be able to air their steamy scene but the footage was indeed shown and the channel was bombarded with complaints from angry viewers.

The show was later cleared by Ofcom of breaching broadcast rules and once filming was finished, Emma had a note of caution for future villa residents when she revealed she regretted her actions on the show, telling new! magazine: “There’s not a day goes by that I don’t wish I hadn’t done that.”

A bust up over a wine spillage – Kady and Malia

Love Island girls are no stranger to a heated word or two and in 2016, things got a little physical when Kady McDermott accidentally spilled wine on love-rival Malia Arkian’s leg.

The pair had been having a chat at the fire pit, after Malia had made moves on Kady’s love-interest Scott Thomas just hours into her arrival. Malia whisked Scott off on a date and Kady was far from pleased.

Kady seemed a tad jealous of the rendezvous and decided to get to know Malia with a fireside catch up where she unfortunately spilled her drink all over her.

Things became heated when Malia accused Kady of dousing her on purpose, saying: “If you wanna speak to me, just come in there. You don't do that with me, not at all.”

Plenty of swearing and shouting was exchanged, as well as an altercation in which Malia was alleged to have shoved Kady, which ultimately left to her untimely ejection.

Kady also later alleged that in footage viewers did not see, Malia punched her so hard she bled.

Accusations of ‘gaslighting’ – Adam and Rosie

In 2018’s series four of Love Island, it was Adam Collard who prompted complaints and drama in the villa over his treatment of supposed love-interest Rosie Williams.

The tall dark and handsome Geordie left viewers fuming after getting close to Rosie, then promptly dumping her when bombshell addition Zara McDermott made her entrance.

Despite their blossoming romance, Adam was seen appearing to "manipulate" Rosie into thinking they had never really been an item but this backfired when complaints came flooding in and a charity accused him of "gaslighting".

In a dramatic confrontation, Adam and Rosie locked horns, with Adam being widely criticised for smirking throughout the argument and sauntering away leaving Rosie in hysterical tears.

This led to Women’s Aid charity boss Katy Ghose being quoted as saying: “On the latest series of Love Island, there are clear warning signs in Adam’s behaviour.

"In a relationship, a partner questioning your memory of events, trivialising your thoughts or feelings, and turning things around to blame you can be part of pattern of gaslighting and emotional abuse. Last night, Rosie called out Adam's unacceptable behaviour on the show.”

It was sweet Dani Dyer’s tears in 2018 that saw Love Island break a new record for receiving the most amount of complaints ever for a single instalment of the show at the time, with the tally reaching 2500 – in a jump from 650 in the space of 48 hours.

The complaints came after viewers branded the show’s decision to show Dani a clip of her boyfriend Jack Fincham meeting his ex Ellie Jones, suggesting he could be double-crossing Dani.

Dani was bereft and left extremely distressed and crying, despite the fact producers were toying with her emotions as Jack had in fact barely spoken to his former flame, who was bought in when the boys were sent off to Casa Amore.

Dani was seen in floods of tears, saying that she should have known the romance with stationary salesman Jack was too good to be true.

Viewers were extremely concerned for Dani and her low state, prompting them to complain about the twist in the show in their thousands.

Twitter users took to their keyboards to write messages, including: "That was a cruel cruel move on poor Dani," and "Dani if only you knew how Jack really feels about you! Cruel this is. Reunite them at once!"

Happily the couple went on to win the show but Ofcom did confirm that the dramatic scenes resulted in Ofcom confirming they had received the highest number of complaints in relation one issue, in the show’s history at that time.

The problem was that Jack was totally shocked by her reveal and staunchly denied the kiss had happened.

Jack was already couple up with Laura Anderson but in a typical show twist, Georgia whisked him away on a date and caused drama when she alleged they’d kissed at the end.

Things took a tricky turn when Georgia and Jack ended up offering different accounts of what actually went down, with Georgia saying the kiss was mutual but Jack saying it was unintentional.

And the drama only worsened when a VAR breakdown of the kiss was shown on After Sun, only for viewers to point out continuity errors in the playback of the kiss from different angles.

The record was never really officially set straight, though Georgia later revealed the kiss has been filmed twice, saying: “There was so much going on in the day I didn’t really know what was going on at that time I just kind of do what I wanna do and they get different angles," she said.

“I honestly don’t remember. I have no idea because there’s so much going on then I’m just focusing on how many times I’ve gotta do whatever I’ve gotta do. Was it more than twice? Yeah,” she admitted.

The hideaway romp that toppled the crown – Zara and Alex

In 2016’s series two, it was bed antics yet again that got the nation hot under the collar and sadly led to contestant Zara Holland losing her Miss GB crown.

Zara Holland and bombshell Alex Bowen shared a now infamous night of passion in the hideaway after viewers gave her a choice of two dates to get cosy with.

Alex had spent most of the day flirting with his now-wife Olivia Bowen, neé Buckland, however he still accepted Zara's invitation into the hideaway, saying beforehand: "When she did pick me I was just like st. I looked at Olivia and Olivia was like 'Oh no'', while Olivia also admitted: "It's a bit gutting."

And in reality, the hideaway is anything but hidden as Night vision cameras captured the evening in detail, leading to drama afterwards.

Alex suffered hardly any consequences from the fallout, going on to be forgiven by Olivia but Zara was left devastated when it was revealed she was to be stripped of her Miss Great Britain title due to misconduct.

She told her fellow contestants her mother had fallen ill then left the villa, later saying of the romp: "It’s horrible. You know, I was in the moment, I was in the Hideaway. I’d had a few glasses of Champagne, I’m not blaming it on that…”

A marriage proposal – Jon and Hannah

Viewers were left with their jaws on the floor back in series one, when Jon Clark, later of TOWIE fame, popped the question to his love interest Hannah Elizabeth.

The loved-up pair seemed set for future happiness when Hannah responded by saying: “I’ve met the love of my life and winning Love Island would just help start our future together”.

However, their happy ending was not to be and the couple split, with Hannah slamming Jon for his alleged treatment of her.

Those toe-curling ‘over the top’ advances – Maura and Tommy

When Maura Higgins set foot in the villa in series five, 2019, she only had eyes for Tommy, despite the fact he was happily coupled up with Molly-Mae Hague.

Maura’s constant saucy remarks about Tommy left viewers aghast and things got very heated when Maura mounted Tommy as he lay on the sofa and attempted to kiss him several times, with the boxer forced to swerve her numerous advances.

The scene attracted over 700 complains to media regulator Ofcom, with fans branding her "desperate" and "predatory".

Despite a barrage of complaints Ofcom said it would not be investigating further, stating: "While we recognise that many viewers disapproved of a contestant's behaviour in this episode, we took into account the context in which it occurred, including the nature of Maura and Tommy's relationship, before and after.”

In series five, 2019 fans of the show were left confused when it was revealed Sherif had been asked to leave the show with immediate effect for breaking the rules.

It later turned out he had kicked Molly-Mae Hague during a play fight and joked it had been a “C** Punt.”

Speaking to The Sun later, Sherif said: “I did kick Molly-Mae in the groin area but it was an accident and she 100 per cent was not injured afterwards. She did appear to be in pain at first but then she stood up and seemed fine and we started laughing about it.”

In 2020’s series five, it was one of the contestant’s off-screen antics that led to him being surrounded by controversy.

Millionaire heir Ollie Williams was revealed to be a trophy hunter who grins for the camera next to the dead bodies of animals he has hunted.

The shock discovery was made after images of his trophy-hunting pastime were shared online just hours after he pitched up in the villa.

Despite widespread backlash from fans, Love Island bosses insisted that had 'no intention' of axing Ollie Williams after he was exposed as a “big game hunter who posed with an array of dead animals he killed in Africa.”

But, it wasn’t long before Ollie did make his exit from the show, suddenly appearing to rediscover feelings for an old flame and feeling compelled to go home.

This little line up I really just a slice of some of the dramas we’ve witness in the villa over the years. And as the 2021 series settles in, there’s little doubt this summer of love will be any less fiery.