A scheme to help women fleeing abusive relationships more easily find out if their partner is hiding superannuation won't be set up until mid-2021, a year later than expected, because it's a low priority for Treasury.

The program for the tax office to share information faster and more easily with the Family Court was promised in the 2018 Women's Economic Security Statement. It was again mentioned in the updated statement released with the October 6 budget. 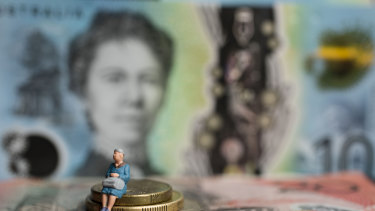 A scheme meant to help domestic violence victims find out if their partners owe them superannuation won’t be ready for at least another year.Credit:Dominic Lorrimer

Domestic violence advocates and legal services had expected it in place by July. But officials from the Attorney-General's Department told a Senate estimates hearing Treasury was in charge of the necessary law changes and the delay was largely down to waiting for those amendments.

"The most recent advice I've had from Treasury is they're looking to do it mid-next year," acting assistant secretary Dianne Orr said.

"My understanding is they have a very large … range of legislative projects that they are progressing which have taken priority over this project."

Superannuation is often a significant portion of the asset pool that is split when a relationship breaks down but it can be difficult to identify where the money is held or how much there is if one partner won't give the information.

Labor senator Jenny McAllister said the lack of fast, affordable ways to resolve family law disputes made the lives of women feeling violence and abuse more difficult, yet they were still waiting for action.

Women's Legal Service Victoria warned Minister for Women Marise Payne in July that delays in the superannuation information sharing would put other Family Court reforms now underway at risk since they also relied on timely, full and frank financial disclosures.

The government has only given the ATO funding to establish the information sharing program.

However, Ms Orr revealed the Family Court's chief justice had asked the government for money to set up its end of the scheme.

"My understanding is that representations were made by the court and the Attorney has advised the court that no additional funds will be provided at this point in time for the measure," she said.