Machiko Kyo, an actress whose many noteworthy roles in postwar Japanese films included the female lead in Akira Kurosawa’s groundbreaking “Rashomon,” died on Sunday in a hospital in Tokyo. She was 95.

The Japanese news media reported that Toho, a studio where Ms. Kyo had worked, announced her death.

In 1950, a year after being discovered by a film scout while performing in an all-female dance revue, Ms. Kyo appeared in “Rashomon” opposite Toshiro Mifune, the magnetic screen idol who was on his way to international stardom.

In that movie, four contradictory accounts are given of the rape of Ms. Kyo’s character and the murder of her husband (Masayuki Mori) by a bandit played by Mr. Mifune. With its vivid portrayal of the unreliability of storytelling, “Rashomon” soon became recognized as a cinema classic.

During rehearsals, Kurosawa recalled, he had been “left speechless” by Ms. Kyo’s dedication to learning her craft.

“She came in to where I was sleeping in the morning and sat down with the script in hand,” he wrote in “Something Like an Autobiography” (1982), his memoir. “ ‘Please teach me what to do,’ she requested, and I lay there amazed.”

Ms. Kyo demonstrated a breadth of emotions in “Rashomon” as each differing account of the rape and murder, including hers, was told.

The critic David Parkinson, writing on the British Film Institute’s website after Ms. Kyo’s death, said she made “an international impact by giving four tantalizingly contrasting performances in playing a single character,” helping Mr. Kurosawa to “exploit the unknowable nature of truth to dispel the theory that the camera never lies.” 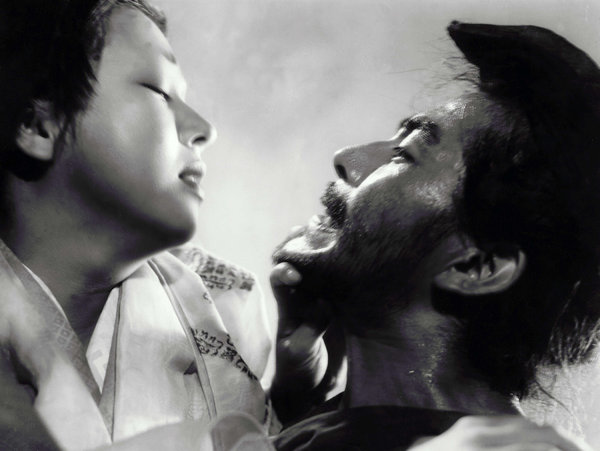 Ms. Kyo’s most productive years coincided with an extraordinarily creative period in Japanese filmmaking that provided an opening to the West. In 1953 she worked with two other major filmmakers, Kenji Mizoguchi and Teinosuke Kinugasa.

In Mr. Mizoguchi’s romantic fantasy “Ugetsu,” she played a mysterious noblewoman who seduces a peasant potter. In Mr. Kinugasa’s “Gate of Hell,” she played a married lady-in-waiting desired by a samurai. “Gate of Hell” won the grand prize at the Cannes Film Festival and an honorary award as best foreign-language film from the Academy of Motion Picture Arts and Sciences.

Her work in “Princess Yang Kwei-fei” (1955), another Mizoguchi film, caught the eye of the former first lady Eleanor Roosevelt. After meeting Ms. Kyo at a screening of the movie at the Museum of Modern Art in New York, Mrs. Roosevelt wrote in her syndicated column, “She is charming and very pretty and does her part extremely well.”

Ms. Kyo’s only American film was “The Teahouse of the August Moon” (1956), an adaptation of the hit Broadway comedy by John Patrick set in Japan during the postwar Allied occupation of Okinawa. She was nominated for a Golden Globe for best actress in a comedy or musical for her performance as the geisha Lotus Blossom, opposite Marlon Brando and Glenn Ford.

Ms. Kyo said she had found American moviemaking, at least on the set of “Teahouse,” to be an illuminating experience.

“In Hollywood, they have a wonderful frame of mind — if you don’t like a scene you just take it over,” she said in an interview with Life magazine in 1956. “In Japan, they have just so much film per movie; if you act poorly, it’s a catastrophe. Very hard on the actor.”

Ms. Kyo was born Motoko Yano on March 25, 1924, and raised in an Osaka slum by her mother after her parents divorced.

Growing up, she aspired to be a dancer. She joined the Osaka Shochiku Kagekidan revue in the mid-1930s, earning $5 a month.

“In those days, I dreamed only of becoming a solo dancer so that my mother would not have to work,” she told The Associated Press in 1955.

During World War II, she recalled, her house was bombed twice. She and her mother hid in dugout shelters throughout the war.

After a film scout from the Daiei studio discovered her, she went to work quickly. Her performance in the lead role in “Naomi” (1949), her second movie, impressed Junichiro Tanizaki, whose novel was the basis of the film.

“She fits perfectly in any period of history, be it now or the Tokugawa, Heian or Tenpyo periods,” he wrote in the newspaper Asahi Shimbun in 1961. “She can also play to perfection any woman in classical work.”

Ms. Kyo reunited with Mr. Mizoguchi in 1956 for “Street of Shame,” set in Tokyo’s red-light district, in which she played a westernized prostitute who smoked, chewed gum and wore tight clothing.

She continued to act in film and on television throughout the 1980s. Her last credited screen role was in the TV series “Haregi, Koko Ichiban” in 2000.

Information about her survivors was not immediately available.

Working in the United States, however briefly, gave Ms. Kyo a glimpse at a different way of expressing oneself.

“We don’t have the American tradition of affection,” she told Life in 1956. “I don’t know whether it’s better to hide such weakness under a yoroi” — a suit of armor — “or show everything that is in your heart. Personally, when I won my first acting prize, I sat on the floor and slapped my forehead with joy.”

But, she added, “that was off the screen.”