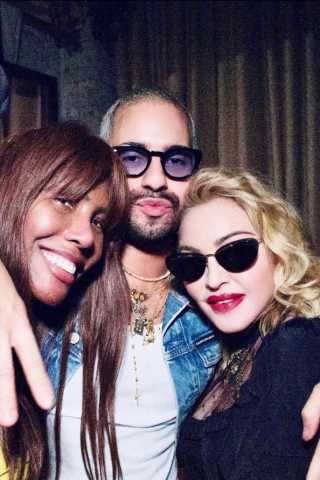 Photographer Ricardo Gomes was on assignment in Lisbon shooting behind-the-scenes when he first met Madonna. She was filming the documentary “The World of Madame X” about her concert tour.

Fast forward two years and Gomes now spends his days following the Grammy winner and her family taking his own documentary footage of them. Madonna gave him the opportunity to get into video after seeing his photography. A self-described “world citizen,” Gomes is based in Los Angeles but frequently travels with Madonna.

Their latest video is a Pride Month-themed one that will debut at 10 p.m. Thursday in Times Square on the NASDAQ screen, and again at midnight. (Stay-at-homers will be able to find the video online, after its release.) The video is called “No fear, Courage, Resist.” Meanwhile, Gomes and Madonna (the guest of honor) are expected to be at The Top of the Standard at The Standard Hotel where guests at a private party will also see the film and installation.

Freedom is the theme of the short film, which will be shown to The Standard’s guests upon arrival in their rooms as part of the welcome TV message. They can also catch clips of it in the hotel’s elevators.

“M has been repeating and reinventing what she has been saying since Day One of her career. We’re working around that [idea] — freedom, expressing yourself, being who you are, believing in what you want to be, trusting yourself, being mindful, powerful and love each other. Those are the most important messages. Love is love and everyone should just accept each other for who they are,” Gomes said. “It’s meant to be a celebratory video. It’s the perfect moment to have this video. We worked on it for Pride for this message.”

He continued, “But it’s a message that should be relevant for everyday — not only for Pride.”

Madonna teased the release on Instagram with a video of a neon frame that illuminated the names of Kaytranada, Honey Dijon, Misshapes and Eli Escobar with “Boom x Pride.” They headline tonight at The Standard. Madonna also posted “God Is Cuming…” to her 16.1 million followers, as did Gomes on his Instagram. He, too, has been flagging the release.

Madonna and Gomes worked on the Pride-inspired video with help from Sasha Kasiuha, who directed it. The “Madame X” documentary, which is expected to be released after this summer via Netflix, is his directorial debut. The photographer got into video through Madonna, which was “amazing,” he said. The length of the documentary hasn’t been decided on.

In the meantime, Madonna and Gomes have teamed for another launch event that will take place at The Standard and in Times Square on the Nasdaq screen. After being approached by creatives at the hotel about the prospect of working with Madonna on something “amazing” for a post-lockdown Pride event, Gomes gave it some thought and talked to his boss. He said, “I believe as with any other idea with her, if you come up with the right idea, the right concept, the right message, she will be into it.”

As for why they work so well together, he said, “Especially in a creative field, it’s super important to be transparent, loyal, creative, speak your mind and just keep going. That’s what we base our relationship on, I believe. That’s how I try to deal with everyone I work with.”

Given Madonna’s global fame and the incessant attention from paparazzi and selfie-seeking fans, filming her sounds daunting. “I have a different relationship than the paparazzi. I respect the space. I try to be creative and fun, because that’s how she likes the work flow to be. Of course, when you’re outside, she understands that there are paparazzi and people, who might recognize her and take her picture. I don’t think she’s against that. Actually, I believe that she has survived and gone through her life really well dealing with it. A lot of celebrities get damaged by that. I don’t think she is at all because she’s confident and has a powerful mind,” he said.

Madonna pays attention to all the details – clothes, hair, makeup shoes, the stage, lighting. “To me, that’s being a real artist — wanting to oversee everything.”

Although he is open to new projects and tries to do as many as he can when time allows for that, Gomes focuses all of his attention on Madonna. But Gomes did recently shot the model Barbara Pavlin for L’Officiel Italia’s cover story. “We removed the classic pretty girl from her and transformed her into a more powerful woman. When I do fashion, I like to do these projects where I am able to make women what they are — powerful, intelligent, sexy, beautiful — a force of nature.”

Nan Goldin, David Armstrong and Brett Lloyd are a few favorite photographers “for doing portraits, fashion, snapshots — all that I love in photography,” he said. Adrienne Raquel’s “Onyx” exhibition of exotic dancers that is on view at Fotografiska New York recently floored Gomes for the way that the clothes were put together and the lighting. “It really shows that you can be a stripper or a prostitute, whatever your work is. It’s so relevant and so incredibly photographed…these girls are beautiful,” he said.

Asked if he finds fashion inspiring or stale at the moment, Gomes said, “That’s a very tricky question for me to answer. I have a very specific approach about fashion that’s not necessarily fashion. It’s more style which is something completely different. I like style. I’m not really into fashion, fashion, fashion designers,” Gomes said. “Even though we can keep it classic and beautiful, we transform it. And sometimes make it less about the clothes and more about the style, and how you can wear it. You can wear a sweater and not have it on. You can play with clothes. Clothes should be fun to play with. You can dress and undress – have one side on and the other side not on.”

Speaking cautiously, he said fashion is coming back slowly, but noted that there was a period in recent years that it was not really relevant to him, or in his personal life. “But it’s coming back again. I would obviously love to do more fashion work with Madonna and with other people, talents and artists that I love. But I’m not hungry for it right now.”