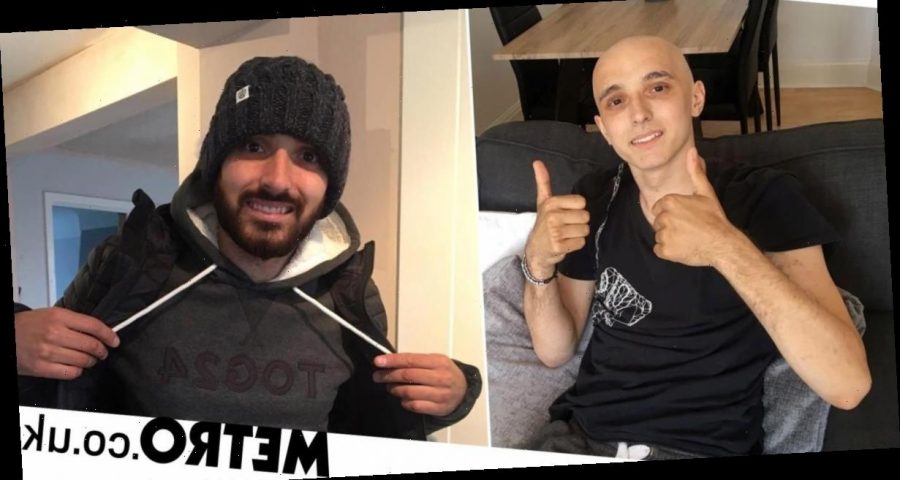 A man who lost a testicle to cancer is to become a dad this year – despite being told it would be ‘virtually impossible’ for him to have kids.

Oliver Roper-Browning, 27, was told the lump on his testicle was nothing to worry about, only for scans to later reveal it was advanced cancer that had spread to his lymph nodes.

His tumorous testicle was removed and he froze his sperm in the hope that he could one day become a father with his partner Stef Hall.

After a successful course of chemotherapy, Oliver was told his cancer was in remission and the couple decided to apply for a course of IVF treatment.

Despite being advised that his chances of conception were slim, his fresh sperm was injected into Stef’s eggs and the pair were told it had been successful on the first attempt.

‘It was devastating to be told we couldn’t have children naturally,’ says Oliver.

‘We have been in a great relationship and we were at the stage where we were ready to have children.

‘I was devastated that I couldn’t give the person I love something we both wanted and what most people can give their partner. I felt like I was letting her down.’

So, when the IVF was successful on the first round, it felt like Oliver’s dreams had come true.

‘We did a pregnancy test and it came back positive. I almost didn’t believe it at first,’ he says.

‘We had an ultrasound scan and there was definitely a baby there.

‘It was up there with being told I was in remission. It was fantastic to give her something that she has always wanted.’

Oliver first noticed a small lump on his testicles when he was in the shower in April 2018.

Initially, he said, it was no bigger than a grain of sand and he went to the doctors, who told him it was most likely a cyst. But within weeks it was half the size of his testicle.

Oliver, from Warrington, Cheshire, took himself to A&E after the pain became unbearable and doctors referred him for an urgent ultrasound scan.

It was then that he was given the diagnosis of cancer in his testicle and lymph nodes.

He underwent surgery to remove his testicle, followed by nine weeks of chemotherapy treatment at the Clatterbridge Hospital in Liverpool.

‘When I was told I had cancer it felt like the biggest kick in the face,’ says Oliver.

‘The doctors started talking about things like chemotherapy, hair loss and infertility – and it was just so overwhelming and hard to take everything in.

‘I was in the prime of my life and couldn’t help thinking “why me?”‘

After beating cancer, Oliver and Stef tried for a baby this summer through IVF and were over the moon to be told it had been successful. The couple are now expecting a daughter in March.

Oliver adds: ‘For most people, 2020 has been a terrible year, but for us it has been probably the best year because we had the best news ever.

‘And 2021 will be even better because we become parents.

‘We started the IVF in June and we found out at the end of that month.

‘I’ve always wanted to have children. When the cancer happened, being told that I might not have children was the worst bit.

‘We can look forward to becoming parents. I’m quite handy at DIY, so we’ve got a room ready and we just can’t wait now.’

Oliver quit his job in IT to become a support assistant at specialist cancer hospital The Christie in Manchester where he works with radiotherapy patients.

And now he is urging people to support Cancer Research UK which has been forced to slash £45 million from its research budget.

This comes on top of £44 million of cuts that were made to the charity’s current grants at the start of the pandemic, as well as not being able to fund any new clinical trials this year.

‘Having cancer took a lot out of me both mentally and physically and was one of the toughest times of my life,’ he explains.

‘There were days when I hit rock bottom as my appearance changed dramatically and I lost a lot of weight. At times I didn’t even recognise myself in the mirror.

‘But thankfully the treatment worked and I’m here to tell the tale and will always be extremely grateful for that.’

After going through cancer treatment, Oliver wanted to do something to give back, so he applied for a role helping cancer patients prepare for proton beam radiotherapy.

‘Every day I get to share my own experiences of cancer and help those patients who are going through it now,’ he says.

‘It’s distressing to think the progress that could help more people like me survive cancer in the future is being delayed because of the effects of the pandemic.’