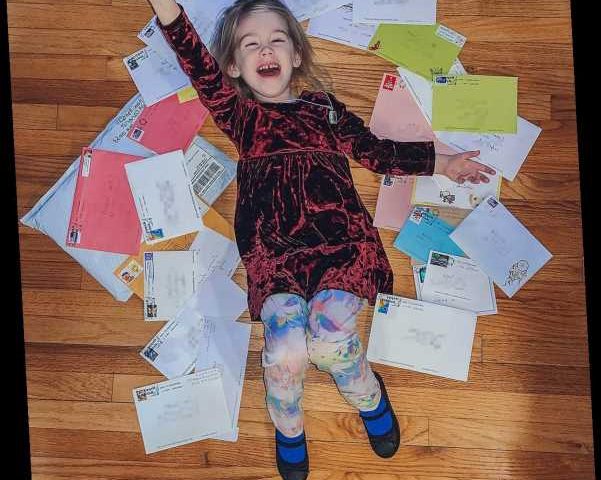 A little girl from Massachusetts wants just one thing when she turns 4 in a few weeks — and her mom is hoping that people around their community can help, especially after her and her daughter's incredibly difficult year.

Lilly Sedlak suffered back-to-back losses in 2020 after her dad and her godfather both died within weeks of each other, ABC/Fox affiliate WGGB/WSHM reported.

With her 4th birthday coming up on Jan. 27 — the first birthday without her father — Lilly's mom Dorothy Sedlak said her daughter just wants cards because she is obsessed with receiving mail.

As she turns to their Holyoke community for help, Dorothy is hoping the birthday card surprise will help brighten her daughter's day — something that seemed nearly impossible just months ago. Back in June, Dorothy and Lilly returned home one day to a sight that no mother, wife or child ever wants to see.

"We came up the hill here into the neighborhood, and there were just tons of cop cars everywhere," Dorothy recalled to WGGB/WSHM. "I didn't even make it into the entrance before I leaped out of the car."

The pair soon learned that Lilly's father, Brandon, had suffered unexpected medical complications and died. He was 28 years old.

Just four weeks to that day, Lilly and her mom suffered another unimaginable loss when they learned that Brandon's best friend, who was also Lilly's godfather, died by suicide, according to the outlet. In order to make her daughter's 4th birthday special, Dorothy turned to Facebook and asked her followers to send Lilly birthday cards.

"Lillian LOVES mail. She loves the mailman, she loves getting the mail from the mailbox & she LOVES when there is mail for HER," she wrote in the post. "I am reaching out to ask if anyone would be willing to mail her a birthday card, drawing or letter. She does not need gifts but she really loves to open cards and letters and look at the pretty pictures."

Dorothy also added that Lilly's "favorite color is violet (not to be confused with purple), she loves unicorns and all things magical as well as flowers & animals of all kinds especially if they are cute!" Within 24 hours, Dorothy confirmed that Lilly received "a stack of Amazon packages" and her mail has only continued to grow since.

On Friday, Dorothy shared a photo of herself holding a stack of envelopes, revealing that "Today’s PO Box haul was 75 cards!!!!" and later posted a shot of Lilly opening 85 cards with a huge smile on her face.

"Lilly has been so excited! We have been blown away by the response and never expected this," Dorothy tells PEOPLE. "We are just so thankful to feel so much love. It’s been overwhelming in the best way."

Those interested in sending Lilly a birthday card can send it to Lillian Sedlak, PO Box 4981, Holyoke MA, 01041.

If you or someone you know is considering suicide, please contact the National Suicide Prevention Lifeline at 1-800-273-TALK (8255), text "STRENGTH" to the Crisis Text Line at 741-741 or go to suicidepreventionlifeline.org.