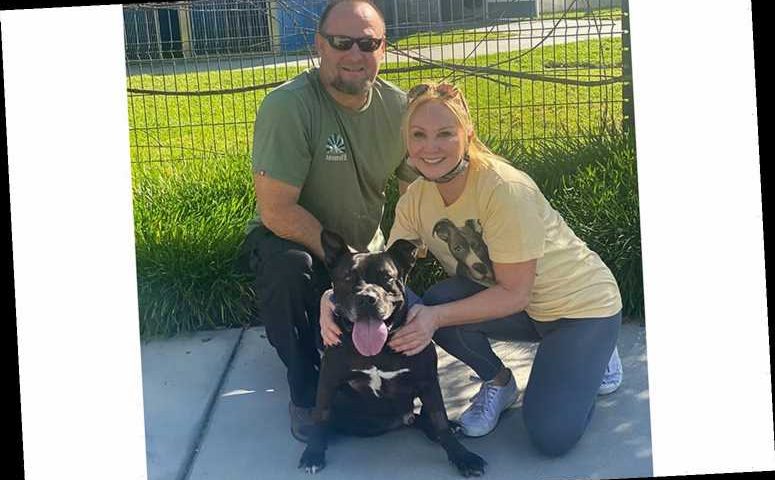 Melvin will celebrate his fourth birthday with a family.

On Wednesday, the rescue canine ended his 667-day shelter stay with the Society for the Prevention of Cruelty to Animals Los Angeles (spcaLA).

"Society for the Prevention of Cruelty to Animals Los Angeles (spcaLA) waited almost two years to say these words: Melvin has left the building!" spcaLA shared in a release about Melvin's adoption. "At 3 years and 10 months, Melvin was set to celebrate another birthday at spcaLA, but instead, he'll celebrate with his new family."

The family that adopted Melvin has "years of large breed experience" and "room in their hearts," spcaLA wrote in Melvin's adoption announcement on Facebook, adding that the dog will have "two Pit Bull siblings to call family" at his new home.

Before arriving at spcaLA, Melvin was picked up as a lost dog by Long Beach Animal Care Services (LBACS). At the shelter, he had trouble finding his perfect match for reasons out of his control.

"Melvin's biggest challenges in finding a home may have been the two things he couldn't change: the color of his coat and his breed," spcaLA wrote about the rescue pit bull. "spcaLA tried social media, networking, and media partners to broadcast Melvin to the public, but ultimately, it was a spcaLA adoption counselor who matched Melvin with a family in search of the perfect Pit."

Melvin's new family decided to adopt him after falling in love with him over several meet-and-greets. This adoption is possible thanks to the dedicated care spcaLA provides to its long-term shelter residents.

During his nearly 2 years at the spcaLA shelter, Melvin received veterinary care and hours of training.

"A dog with a long length-of-stay like Melvin's receives hours of training and daily enrichment in order to remain mentally and physically resilient and stable in the shelter environment," Sara Taylor CABI CPDT-KA, spcaLA's director of animal behavior and training, said in spcaLA's release. "There is also a significant emotional investment because we become their interim family, waiting for someone to give them a chance to become a companion."

The spcaLA is excited to see Melvin get the love he deserves and thanked the dog's adopters and all of the spcaLA's supporters in their release.

"While I thank the family for adopting and the staff for working so hard for Melvin, I would be remiss if I didn't thank our supporters, whose help makes everything we do possible," Madeline Bernstein, spcaLA's president, shared.

To learn more about spcaLA and support their efforts, visit the organization's website.