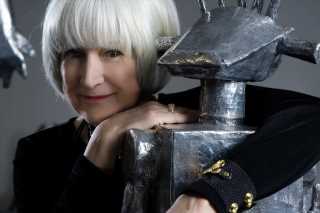 Summer may be in full swing, but Mia Fonssagrives Solow is pretty much working straight through.

Having previously worked as a fashion designer with Parsons pal Vicky Tiel during the high-flying ’60s in Paris, Fonssagrives Solow is the daughter of renowned lensman Fernand Fonssagrives and model Lisa Fonssagrives, and is the stepdaughter of esteemed photographer Irving Penn. Her fashion ties include an early, brief marriage to the late designer Louis Féraud. But art has been the focus of her career — sculpture, in particular, as well as jewelry design.

Starting Tuesday, Sotheby’s will show 15 to 20 of her gold jewelry designs at its East Hampton, N.Y., outpost. The special exhibition will run through Aug. 1. Animal shapes, robots and abstract designs will be on view to purchase and special orders will also be taken. A robot pendant with a big flashy stone on the backside, which the artist calls “the brain” and a smaller stone known as “the energy pack” is a personal favorite. “In the daytime, it’s just a plain old robot facing out. In the evening, you turn it around and you have the big flashy colorful stone with the smaller stone. It’s on a black shoestring choker. Every time I wear it, people ask me, ‘Oh, where can I get that,’” she said. “I would sell it off myself.”

All the Looks at the 2021 Cannes Film Festival

With Sotheby’s East Hampton location on Newtown Lane near the popular eatery Babette’s, Fonssagrives Solow is hoping for some spillover traffic. Referring to the abundance of summer visitors, she said, “It’s so busy. You have to wait in line to get into town…just driving through town to go to the IGA — it’s very, very crowded.”

Partial to tourmaline, topaz, amethyst and citrine, Fonssagrives Solow prefers not to use big flashy diamonds. “But if somebody wants it, of course, they can have it,” she said. “It’s kind of dangerous wearing something too big. Whereas, the quieter stones that aren’t massively expensive like emeralds, rubies and diamonds I like to use.”

Repurposing stones and jewelry that people have grown tired of and transforming them into new pieces is another specialty. All of the Sotheby’s pieces are made of 18-karat gold and retail in the thousands with some between $8,000 and $12,000.

With pieces by Henri Matisse, Pablo Picasso and Jean-Michel Basquiat, among other prized artists, the collection has been mostly inaccessible to the public through the Solow Art and Architecture Foundation. Solow died in November at the age of 92. His family has reportedly received tax breaks for running the organization.

Some of Fonssagrives Solow’s own artwork was recently shipped to Dubai for a September show at the Leila Heller Gallery that will be on view for six to eight weeks. Afterward, select pieces will be shown in other locales.

In preparation for the Dubai trip, the artist has been making clothes for one of her daughters-in-law, two granddaughters and herself. Knowing leggings are not an option and women’s arms need to be covered, Fonssagrives Solow has been sewing caftans and other modest options that were inspired by “beautiful clothes I made years ago with silk patterns like the edge of an Hermès scarf that is different from the interior,” she said. “I want to be respectful of the culture and not have any situations.”

A few early Missoni designs (before the Italian house favored its signature zigzag print) will also be packed for the trip. Recalling her designer days of the ’60s when Tiel’s and her designs were showcased in all of the windows at the Bloomingdale’s flagship at one point and the actress Elizabeth Taylor was a regular client, Fonssagrives Solow said fashion never stops being part of her life. She continues to sew things for an older crowd and explained, “I don’t do bustiers with big behinds showing. I do things that are good for people like me or people who are 60 or over and want to look amusing, fun and maybe a little flirtatious. But nothing all-naked, boobs in your face.”

En route back from Dubai, the artist will stop in Paris to deliver some of her jewelry to the Fondation Maeght on the Rue du Bac. Another stop is planned for the Pierre de Montreuil gallery in Paris, where some of her animal sculptures are being sold. During the pandemic shutdown last winter, Fonssagrives Solow made goat figures starting with paper and recycled materials, relying on a Long Island City foundry to process them into aluminum.

Leila Heller is planning on having a wall of the artist’s bronze- and nickel-plated sculptures in this fall’s armory show in New York. The artist has been working on drawings that she may turn into 6-foot silkscreens. “I used to do fashion drawings, which were acceptable. I know how to draw a fashion model in a stylish pose but these are different. These are sort of abstract. They are the forms of humans but I am using colors — black, yellow, red, blue and white. It’s hard to explain but it’s coming together. It’s nice to work in a different way right now. I’m planning a show but I don’t know where it will go or who will be interested.”