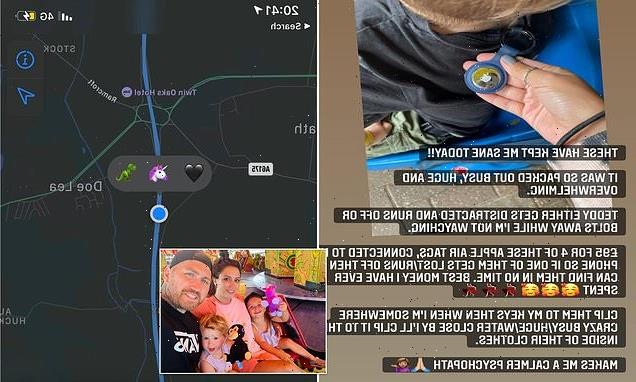 A mother-of-two has been praised by fellow parents after sharing an ingenious way to keep track of children.

Taking to Facebook, Lucy Jobbins, 32, from Leeds, West Yorkshire, who has a daughter Penelope, five, and son Teddy, three, explained that she has been using Apple’s new AirTags to keep an eye on her children at all times.

The beauty therapist bought the AirTags on Amazon last week and has been clipping them to the inside of her kids’ clothes when they are in crowded spaces.

Priced at around £29, Apple designed AirTags to keep track of lost keys or wallets – however they’ve also become an instant hit with parents keen to look out for their kids. 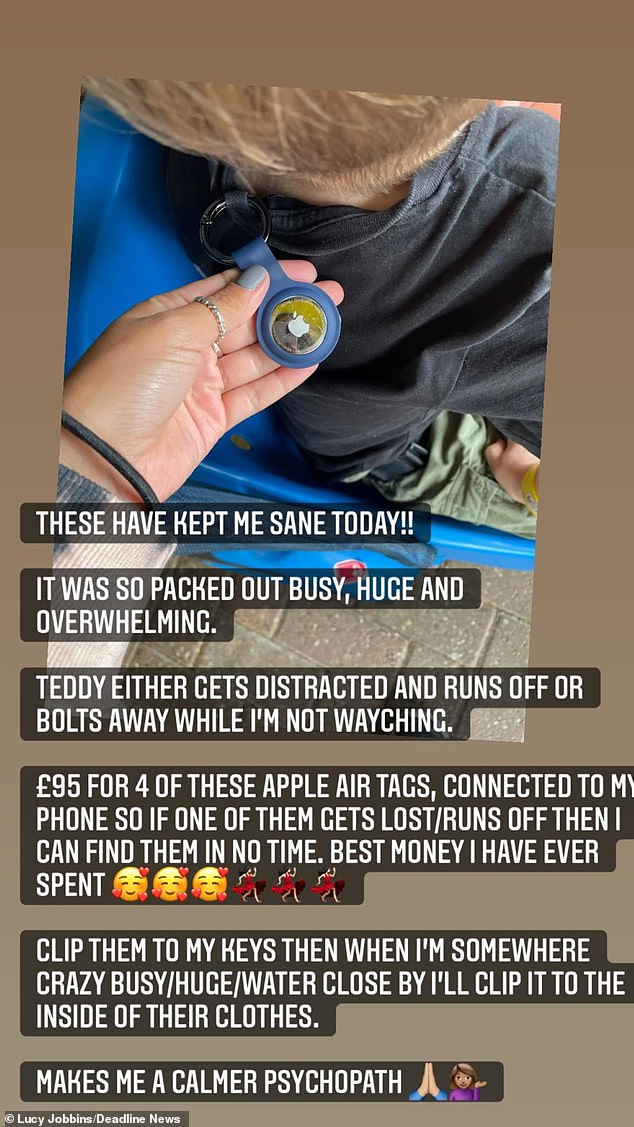 Lucy Jobbins, 32, from Leeds, West Yorkshire, has been praised by fellow parents on Facebook after sharing how she’s able to track her children Penelope, five, and Teddy, three, using Apple’s AirTags (pictured)

Lucy, explained that she got the idea to use AirTags from a friend, after becoming wary of letting her children wear a bracelet with her phone number on 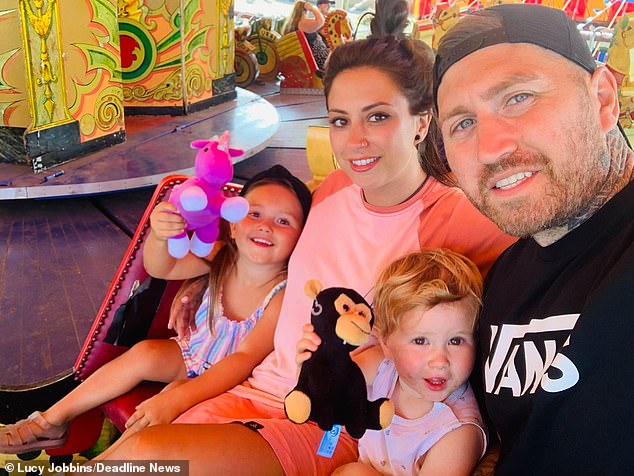 Lucy said she clips the AirTags to the inside of her children’s clothes when they are in a crowed space, then connects the gadgets to her phone. Pictured: Lucy and her partner Antony Turner with their children

Lucy came up with the idea after feeling anxious about losing her children in public.

In her social media post she explained: ‘I thought parents would appreciate this. I have two babies under five and one of them bolts away from me whenever he gets the chance.

‘Apple air tags from Amazon, connected to my phone so I can clip them to the inside of their clothes if we go somewhere busy/crowded.

How are Apple AirTags used for tracking?

Apple officially unveiled its long-awaited AirTags – a Tile-like devices that tracks missing items through the ‘Find My’ app – in April 2021.

Similar to the already popular Tile, AirTags can be attached to keys, a wallet or other products and provides notifications when you become separated from the item.

It is a small, circular device with an Apple logo at the center, and is equipped with Bluetooth connectivity to pair with an iPhone or iPad.

Using the ‘Find My’ app, the system provides step-by-step directions to locate the tag and the missing product.

There is a built-in speaker that plays sounds to help locate AirTag, while a removable cover makes it easy for users to replace the battery.

Users can also assign AirTag to an item and name it with a default like ‘Keys’ or ‘Jacket,’ or provide a custom name of their choosing.

Once AirTag is set up, it will appear in the new Items tab in the Find My app, where users can view the item’s current or last known location on a map.

If a user misplaces their item and it is within Bluetooth range, they can use the Find My app to play a sound from the AirTag to help locate it.

Users can also ask Siri to find their item, and AirTag will play a sound if it is nearby.

‘Best money I have ever spent. I used them while we were at Alton Towers this weekend and it really calmed me down.

‘We lost my littlest at a beach last year and I never recovered from the trauma. Until now.’

The post racked up over 100 comments, with many parents admitting they’re eager to try the hack for themselves.

One person wrote: ‘Got the same for my daughter last week and it goes in her school bag because she now travels by bus quite a way each day.

‘It’s really good for giving me peace of mind.’

Another commented: ‘These would be great for holidays!’

A third added: ‘I once lost my son in the supermarket. He was with me and I was leaning over.

‘By the time I got back up he was gone! I found him in the photo booth with the curtain closed. Taught me that they really do just disappear in seconds.’

Lucy said that her mind ‘runs absolutely wild with fear of something happening’ to her children.

She explained that her son Teddy was missing for ten minutes last year during a family outing, which left them ‘running around like headless chickens trying to find him’.

‘I think I am just the average paranoid mum. I saw some bracelets on Instagram and they have your number on them, so I put them on the kids a few weeks ago.’ Lucy said.

‘But then I realised if they fell into the wrong hands, then we’d have trouble. My friend told me about Apple AirTags.

‘I have them attached to the inside of my baby bag, so when we’re out and about and I get a bit stressed from crowded places I will clip them on the inside of the kids clothes tag.

‘They know all about it. So if they are lost they know to stay still and I will be able to come and get them. 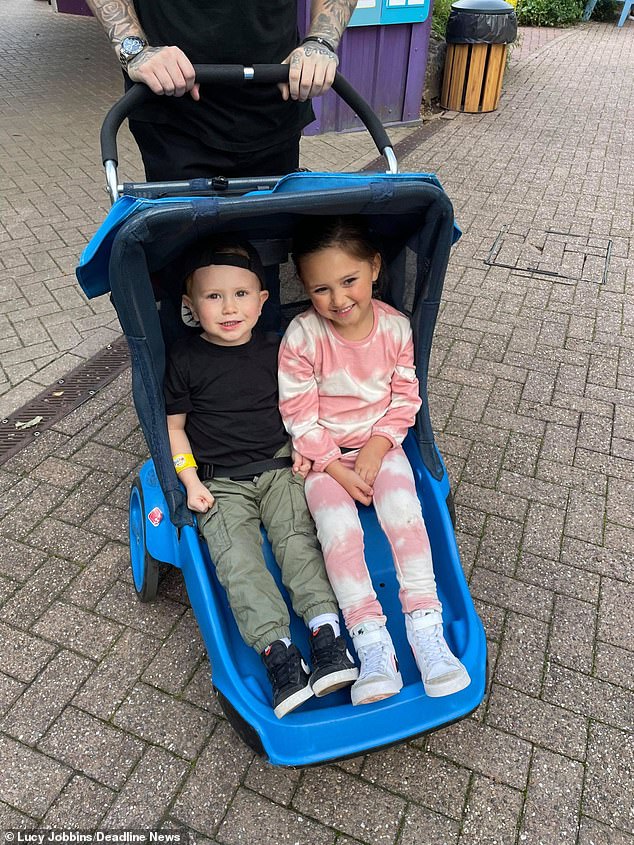 Lucy said her children are aware of the AirTags and have been instructed to stay still if they are lost. Pictured: Penelope and Teddy at Alton Towers

‘It really calms me down. Until you have two kids and are in a crowded area you would never know the stress.

‘There is nothing I could recommend higher.’

An Apple AirTag use signals from Apple products such as iPhones and iPads in close proximity.

It then bounces its own signal back to the iPhone registered with the tracking device based on the location of other Apple devices near it.