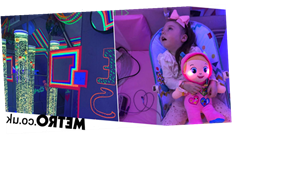 Kirstie Dallas, 27, wanted to create a special space just for her daughter Esmé, who has a condition that causes visual impairment and sensory processing difficulties.

She quickly realised that the costs could pile up – so decided to take on the project herself.

In the space of just four hours, – and for just £300 – the mum managed to make an incredible sensory den for Esmé.

‘The main consideration I had when creating the room was for it not to be too busy, as that would be sensory overload,’ Kirstie told LatestDeals. ‘I knew exactly what I wanted in it, as I know what Esmé does and doesn’t like.

‘Also, the lighting was of the utmost importance.

‘Firstly, I removed all the clutter from underneath the stairs. Next, I laid the carpet using an offcut that was leftover from carpeting my stairs a few months ago.

‘I put foam mats from Ikea, which cost £22 each, over the top of the carpet and I also placed them on the walls, cutting them as needed to make them fit.

‘The mirrors cost £4 for four from Ikea and are fixed to the wall with the self-adhesive strips they come with.

‘The two mood tubes are from Learning Space and cost between £70 and £120. I then added the bubble tube – you can find these in Asda, Argos, The Range.

‘I put the bubble tube on top of the mood light to create extra height so that Esmé could see it. I positioned it in the corner where I put the mirrors so that when it’s illuminated the reflection makes it appear brighter and makes the space look bigger too.’

Kirstie bought a UV lamp for £50 from Amazon, which came with UV crayons that she used to make some doodles on the walls.

She also bought UV strips from Amazon (£12 for 12 pieces), fashioning some of them into a bespoke design for the ceiling.

She then added UV stars and moons for an extra touch (from Leaning Space for £4.99 and £6.99, respectively).

For the cosy corner, she placed a large, roll-up fluffy sleeping bag, which can be easily tidied away.

The family is thrilled with the end result – and Esmé absolutely loves her new space.

‘The sensory den looks better than I could have imagined. I absolutely love everything about it,’ said Kirstie. ‘It’s all I’ve ever wanted for Esmé, as she can’t get joy out of many of the usual things that four year olds play.

‘She loves spending time in there and relaxing to the theme song from Frozen.

‘She is so calm in the den that she can sit there for hours. Plus, it’s great for her visual, auditory and tactile processing, as well as fine and gross motor skills.

‘She doesn’t like too much going on at any one time, so I would only have her strip light and bubble tube on at once. After that, I may turn on the UV light with the mood light and music.

‘I wanted Esmé to have her own space to chill away from the background noise of the madness that’s always going on in my house.’

Kirstie shared the project on Facebook, where photos quickly received thousands of likes and comments.

The mum hopes that sharing how she created the room could help other parents of children with sensory processing disorders.

‘Esmé has severe Cerebral Visual Impairment (CVI), which is a form of visual impairment caused by the brain not being able to process information from the eyes passing along the visual pathways to the brain,’ Kirstie, who is also mum to a son, Carter, five. explained. ‘She’s registered blind, as even though her eyes are perfectly healthy, her brain is not.

Esmé’s condition is due to a rare neurological genetic disorder called pontocerebellar hypoplasia.

‘It is a life-limiting disease that affects around 100 children in the world, and there is no cure,’ said Kirstie. ‘She has always been tube-fed, and is hooked up to an oxygen saturation and heart rate monitor around the clock.

‘On top of this, she has epilepsy, dystonia, microcephaly, and global developmental delay. She uses oxygen day and night, needs a suction machine to control her saliva and is prone to upper respiratory infections. We were told that she wouldn’t live to age two, but Esmé is now four years old.’

To other parents pondering their own sensory den, Kirstie has some words of advice.

‘If you are a parent of a child with visual impairment and would like to make a similar sensory room, I would advise you to sit down and draw up a budget and go from there,’ she said.

‘A den like this can be achieved for next to nothing. Products especially for visually impaired children can be 10 times the normal price, but you can find lots of items that are suitable for a sensory room from high-street stores, such as Home Bargains, B&M and Argos.

‘I am currently on furlough but I don’t think that I will be able to return full-time after lockdown as Esmé’s condition is worsening so it’s difficult for me to be at work.

‘Maybe I will turn my hand to doing something else, like making sensory rooms.’