In the elegant surrounds of the Hilton London Metropole near Hyde Park, the supremely well-connected Irish-Nigerian-Indian businessman Benoy Berry was spinning a deal not even John Howard had got over the line when he was Prime Minister.

At the 2007 meeting Dr Berry was persuading the Governor of the Central Bank of Nigeria to buy a unique Australian invention, polymer bank notes that would be printed as the country's 20 Naira note. 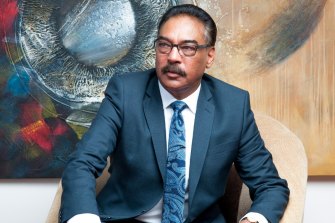 Dr Benoy Berry was defrauded by agents of a Reserve Bank of Australia company.

Access to the Nigerian market, one of the largest cash economies in the world, was worth potentially hundreds of millions of dollars to Securency, a company half owned by the Reserve Bank of Australia and with a board overseen by some of its officials. That government connection reassured Dr Berry of the project's legitimacy when he agreed to sell the company's products into Africa in return for a commission.

"I was told that this was, after Foster's beer, Australia's most prominent export," Dr Berry told The Sydney Morning Herald and The Age from London. "The fact that the Australian Reserve Bank was involved gave us a great deal of comfort."

Dr Berry, who says "yes" with a chuckle when asked if he is a billionaire, was a good man for the job. He has extensive business in Africa and had ties to Nigeria's then-president Olesun Obasanjo, having travelled to Nigeria in 1995 with Zimbabwe's Prime Minister Robert Mugabe and Uganda’s President Yoweri Museveni to beg for Mr Obasanjo's release when he was languishing in jail as an opposition leader.

From joining the polymer project in 2004, Dr Berry enjoyed quick success convincing the Nigerian government some of its denominations should be swapped to polymer, something Mr Howard had not been able to convince Mr Obasanjo of when they had met twice in the early 2000s.

But things at Securency were going badly wrong. From 2009, The Age and The Sydney Morning Herald began reporting how some of the company's personnel were paying bribes to secure banknote contracts overseas.

(In 2011, Securency plead guilty to bribery charges relating to countries including Indonesia, Malaysia and Vietnam. Five of its officials were sentenced but another four were not prosecuted because the Australian Crime Commission interviewed them unlawfully.)

In a 2018 statement made after gag orders that had frustrated earlier reporting were lifted, the RBA said its officials had no knowledge of the bribery problems. Nonetheless Governor Philip Lowe said: "The RBA accepts there were shortcomings in its oversight of these companies, and changes to controls and governance have been made to ensure that a situation like this cannot happen again."

Dr Berry was caught up in the scandal too. His home was raided by Britain's Serious Fraud Office in 2009. "You can imagine having armed policemen in your house, they were all over the garden, you know, it was not very nice," Dr Berry says. The fraud office later paid him an undisclosed sum as compensation.

In reality, "it was a Nigerian scam that involved the Nigerians being scammed," says Dr Berry's Australian lawyer, Damian Sturzaker from the firm Marque.

Nigeria badly wanted to be able to make its own polymer banknotes. That would give it greater control over its own money but there was a bigger prize too: Economic Community of West African States, a group of 15 countries in the region, has long been planning to adopt a single currency.

With a polymer plant, Nigeria could upgrade the entire region's currency, which would be both lucrative and sustainable, avoiding the need for flimsy paper notes.

Hugh Brown, Securency's chief bank note salesman, led the Nigerian government to believe that if it bought enough bank notes, that facility was on the cards. But, the High Court found, "those assurances were false". Dr Berry too was deprived of his commission through a "shabby fraud".

A Securency agent who arrived at his house in 2008 had Dr Berry agree to end his old deal with the company, which he said would be replaced with a new arrangement that would help build the polymer plant. That never happened.

Instead, Dr Berry was deprived of commissions worth $27 million for the polymer sold to Nigeria, the High Court found last week. With interest, Dr Berry and his company will receive more than $40 million from CCL Secure, the company which now owns what was Securency.

That decision, which he says is not about the money, has restored Dr Berry's faith in Australia. He still wants the polymer plant built in Nigeria, despite having been "betrayed" before.

The Reserve Bank sold its share in Securency in 2013 after the scandal broke. CCL Secure declined to comment.