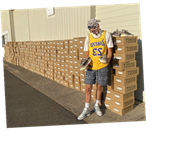 A high-ranking Nike executive resigned after a recent news report revealed her son had used her corporate credit card to help his lucrative resale sneaker business .

Ann Hebert, who worked at Nike for more than 25 years, was most recently the company’s vice president and general manager for North America. A spokesperson told CBS News on Tuesday that Hebert “made the decision to resign from Nike.”

Her 19-year-old son, Joe Herbert, told Bloomberg Businessweek about his operation to purchase loads of sneakers and flipping them for higher profits. In one instance, he said he gathered more than 15 people to swarm a website selling pairs of coveted Yeezy Boost 350 Zyon sneakers and then used bots to bypass a system designed to limit purchases to one pair per customer. He said he bought $132,000 worth of Yeezys on a credit card and resold them for a $20,000 profit.

To prove the revenue his company was making, the teen sent a financial statement to a Bloomberg reporter for an American Express corporate card — and on it was his mother’s name.

Last year, Ann Hebert was promoted to be Nike’s vice president and general manager for North America, a move the company touted as “instrumental in accelerating our Consumer Direct Offense.” The strategy would decrease reliance on brick-and-mortar stores and push customers to buy sneakers on its app. As Bloomberg noted, the initiative “helped fuel the sneaker-resale boom.”

A Nike spokesperson told Bloomberg, however, that she disclosed relevant information about her son’s company in 2018 and Nike found no conflicts of interest. Her son also claimed she was so “high up at Nike as to be removed from what he does” and he never received inside information from her.

According to Bloomberg, Hebert shared information about upcoming online releases to paying subscribers on a chat group. He claimed he had no inside information; instead, he said his business savvy simply derived from living in Portland, where Nike bases its U.S. operations.

“If you know the right people here, this is the city to sell shoes,” he told Bloomberg. The right people “can give you access to stuff that, like, a normal person would not have access to.”

Hebert’s company Instagram account features an image of hundreds of sneaker boxes, containing some of the most heavily desired pairs available.