The tongs are out after a Melbourne council moved to outlaw backyard barbecues and firepits, stoking swift public outrage.

A proposed change to Bayside City Council's local law would see a ban on burning solid fuel, such as wood and charcoal, for backyard fires or outdoor cooking, like wood-fired pizza ovens. 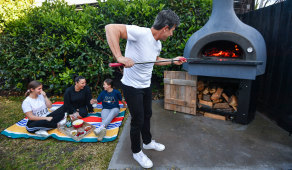 The amendment was revealed online on Thursday, with the municipality citing complaints around the "offensive emissions" of smoke and odour in the area on its website.

For Brighton East couple Sandra and Gianluca Bocci, the suggestion that their beloved backyard oven be retired is "nonsensical".

Churning out pizzas, whole roast chickens, bread and biscuits with regularity, the oven has become a cornerstone of chef Gianluca Bocci's home cooking.

"How could you possibly take that away from people, especially now when we're not allowed to be out and about? We only have our backyards," Mrs Bocci said.

"When we light the wood-fire oven in the summer, we call our neighbour and tell her to bring any clothes in off the line and to close any upstairs windows. Later on, they might come by and grab a pizza.

"Why not ask people to be respectful, rather than continuously taking things away from us?"

Bayside City Council's website states they receive three complaints a year on average about the smoke and smell coming from solid fuel fires. A petition to ban outdoor fires was lodged to the council in August 2018, with only five signatures.

Online reaction to the ban was overwhelmingly negative on Saturday, with hundreds of comments from residents condemning the proposal.

The local law, which is only reviewed every 10 years, is expected to be brought by June 2021 after a second round of consultation early next year. 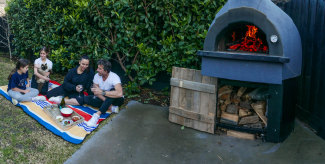 Sandra and Gianluca Bocci with their daughters Chloe (13) Astrid (11) fire up their wood-fire pizza oven in backyard. Credit:Joe Armao

Bayside City Council's mayor Clarke Martin said he knew the suggested local law change would be "divisive", with the angry emails already stacking up in his inbox.

But he said the debate needs to be had, urging bayside residents to think about other people who might have respiratory issues before they fired up their barbecues and braziers.

"For someone who is having a romantic evening by the fire, it's beautiful for them, but if the smoke is coming across and affecting 20 units down the road then it's a problem," he said.

"If someone wants to have that kind of experience, they need to think a bit more clearly about it and do it on a day or an evening where the winds are taking it all away quickly."

In June, Brisbane City Council began a trial that allowed fire pits for heating purposed across winter (the practice had previously been banned across the council area).

On total fire ban days in Victoria, the use of fire-pits, solid-fuel barbecues and wood-fired ovens in backyards is prohibited.

The broader Bayside City Council local law amendment also proposes extending the beach smoking ban to include all foreshore areas, and preventing the long-term parking of trailers, caravans and boats across the municipality.