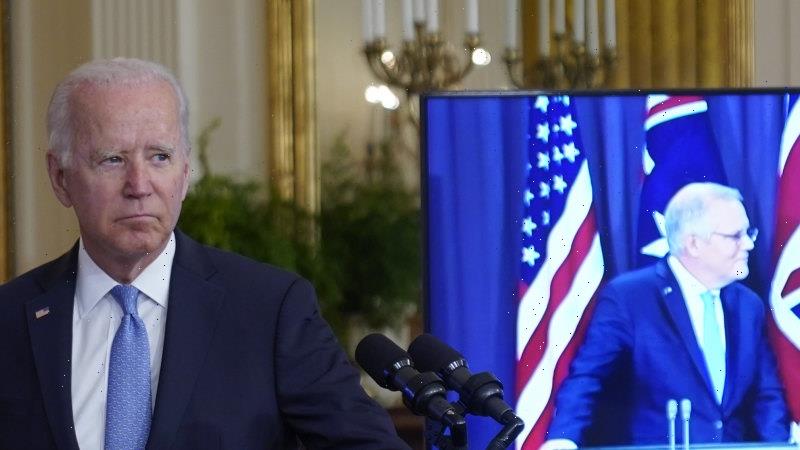 In the year since Australia’s most significant defence announcement in decades – the creation of the AUKUS partnership with the United States and United Kingdom – the gloomy geopolitics that prompted it have only darkened.

Russia’s invasion of Ukraine has reminded nations of the need to prepare for an attack by a powerful adversary, as have increased Chinese incursions into Taiwan’s airspace. 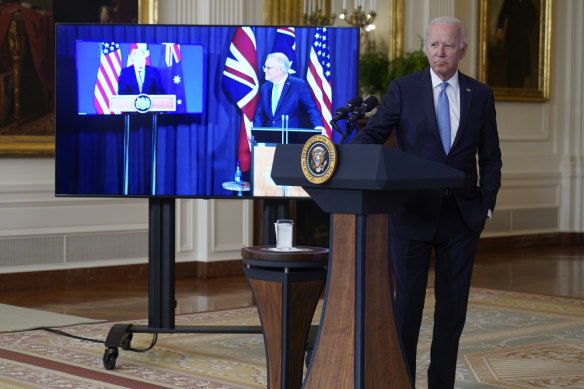 Of the three leaders who unveiled the AUKUS pact, only US President Joe Biden remains in power. Credit:AP

AUKUS still has plenty of detractors, but its advocates argue recent events have reinforced the need for Australia to acquire the high-tech weaponry the partnership will unlock. Most notably, there is the promised access to highly prized nuclear-powered submarines that can travel further underwater than conventional vessels.

“In the 12 months since the announcement of AUKUS, the resolve of Australia, the UK and the US has only strengthened as the strategic environment has continued to deteriorate,” Vice-Admiral Jonathan Mead, the chief of the government’s nuclear-powered submarine taskforce, told reporters this week.

In a report on the first anniversary of AUKUS, analysts from the Australian Strategic Policy Institute argue Australia now faces “the most dangerous strategic outlook since the end of the Cold War”, making “the advanced technologies AUKUS aims to foster even more relevant”.

Reflecting the volatility of modern democratic politics, just one of the three leaders who struck the initial deal remains in power. Scott Morrison and Britain’s Boris Johnson are now both humble backbenchers, leaving only US President Joe Biden.

Despite the leadership upheaval, all three nations remain committed to the partnership. Labor embraced AUKUS almost immediately in opposition, and the Albanese government has moved speedily to take ownership of the pact. New British Prime Minister Liz Truss is a passionate AUKUS supporter.

Details of how AUKUS will work, beyond the grandiose rhetoric that accompanied its launch, are slowly being fleshed out. Over the past year, working groups have been created, key officials appointed and important agreements reached. Britain has announced Australian submariners will be welcomed to train on their nuclear-powered vessels and the US Congress is advancing legislation on the same issue.

However, the crucial question of which submarine model Australia will acquire remains unanswered.

With Britain’s current Astute-class submarines widely seen as out of the running, attention is focussed on the US Virginia-class vessel or a “next generation” American model currently being designed.

British Defence Minister Ben Wallace recently raised the possibility of a new “collaborative” submarine shared between the UK, US and Australia.

Defence Minister Richard Marles teased reporters this week by saying the government had essentially made up its mind on its chosen design and was figuring out how to make it a reality.

“The optimal pathway is taking shape, we can now begin to see it,” Marles said. The government’s burlesque slow reveal is set to culminate with an official announcement in March.

Marles made clear he was not a fan of Australia adopting a unique submarine model, in the wake of its current custom-built Collins-class vessels.

“It’s obviously much better if you are operating a platform which other countries operate as there is a shared experience and a shared industrial base to sustain it,” he said.

Whatever design is finally unveiled, signing off on it will be a politically charged operation requiring sign off from three nations with high financial stakes in its success.

Indicating both US and UK technology will be included in the final design, Marles added that “it would be better if we’re in a position where what we’re doing is genuinely a trilateral effort”.

The first: an aggrieved French President Emmanuel Macron, who was furious at Australia for axing an existing contract with the French Naval Group.

The second: blowback from China given AUKUS was clearly designed to counter its growing assertiveness in the Indo-Pacific.

Then there was alarm from Australia’s Asia-Pacific neighbours, such as Indonesia, who are unsettled by the idea of nuclear-powered vessels patrolling the region’s waters.

The transition from Morrison to Albanese has largely soothed France’s anger, as has a $835 million compensation settlement. Macron and Albanese vowed to rebuild the bilateral relationship at a friendly July meeting in Paris; Macron is expected to visit Australia later this year.

The International Atomic Energy Agency last week sent a confidential report to member states saying it was happy with the level of engagement from the three AUKUS nations.

This prompted a furious reaction from Beijing, which said the report was lopsided and underestimated the risk of nuclear proliferation.

Such anger reflects China’s frustration at its failure to halt AUKUS’s advance. While still uneasy, Indonesia appears placated by the prospect of enhanced safeguards and transparency.

But with the first nuclear submarine not set to arrive in Australia until the 2030s at the earliest, unforeseen complications are certain to arise.

A year on, the AUKUS story is only just emerging.