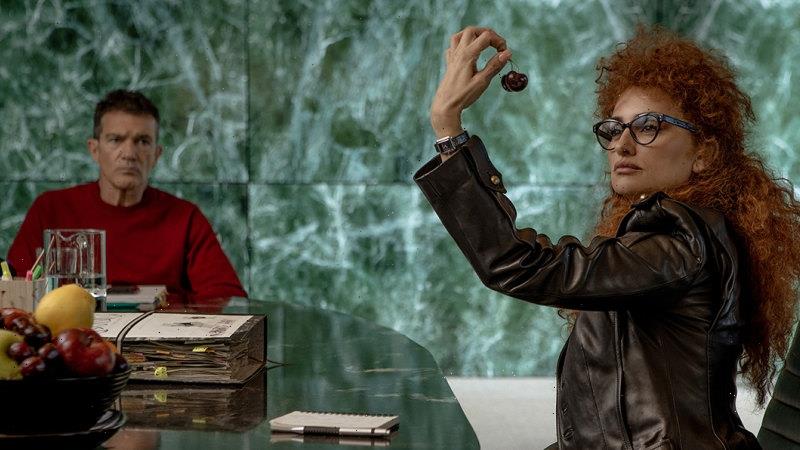 Felix Rivero (Antonio Banderas) and Ivan Torres (Oscar Martinez) are actors, but they could never be called luvvies.

From the moment they begin working together, they’re at odds – engaged in a battle of egos cunningly orchestrated by their director, played by Penelope Cruz with wild hair and an attitude that is more than a match for the pretensions of her two leading men. 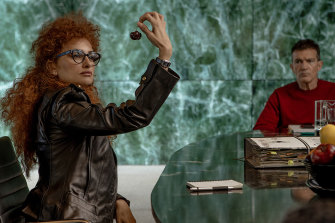 Penelope Cruz plays director Lola Cuevas, who tortures her charges with a series of acting exercises.Credit:

Official Competition is the work of Argentinian co-directors Mariano Cohn and Gaston Duprat, who have crafted a gleeful send-up of film-making at its most rarefied. The money for their imagined production comes from an elderly Spanish tycoon who wants to enhance his prestige with the creation of something truly worthwhile.

A bridge would be nice, he muses, before changing his mind and settling on a movie. He buys the rights to a Nobel Prize-winning novel and, on the advice of an associate who has seen at least one film in his life, he hires Cruz’s Lola Cuevas to direct.

For Lola, rehearsals are everything, and the rest of the action unfolds in a series of cavernous rehearsal rooms where psychological one-upmanship immediately becomes an intrinsic part of the daily routine.

Rivero is a movie star with a thriving Hollywood career, an orange Lamborghini and a burgeoning collection of Golden Globes, while Torres has achieved a long and admired career in the theatre that has led him to formulate elaborate theories about acting and how it should be done.

As the film in which they find themselves is called Rivals, things couldn’t be better. At least that’s the way Lola sees it. Capitalising on the fact they play brothers who detest one another, she devises an ingenious series of acting exercises that heighten the tensions while proving highly entertaining for those of us watching from the safety of the front stalls.

Banderas’ Rivero is a comic delight – by turns swaggering, sly and completely out of his depth. At times he sits gripping his script, eyes glazed over in wonder at the alarming prospect of what Lola is going to dream up next. And she seldom disappoints.

Cruz, too, does a lot of swaggering, but as things heat up, she’s occasionally thrown off balance with very funny results. Both performances unite the histrionic and the deadpan in a way that seems to me to be distinctly Latin.

Martinez is left to play the straight man, but manages to extract quite a few laughs from Torres’ earnest efforts to pull rank.

And in between the comic highlights, the script succeeds in planting some surprisingly revealing insights about the vanities and illusions of the theatrical life. It’s a very clever film.