Like so many events in this 2020 Adelaide Festival, Enter Achilles is concerned with human frailties and the horrors of the world around us. That it was made in 1995 – and first seen at an Adelaide festival soon after – simply underlines the ongoing unpleasantness so close to the surface of ordinary life. 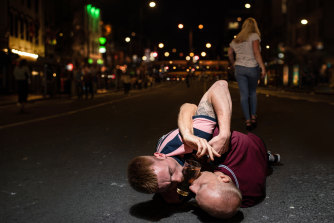 Enter Achilles gets under the skin of ordinary life.Credit:Hugo Glendinning

In this work, it is a male community in a pub, guzzling beer, watching football on TV and hitting on each other in more ways than one. It is a violent group, powered by sex that turns to fighting and easily triggered against each other by such a simple act as choosing to drink a glass of wine rather than a pint of beer.

It is a very English piece, updated by spoken comments on current UK politics, yet it is probably, unfortunately, applicable worldwide.

Choreographer Lloyd Newson is Australian-born but has spent most of his award-winning career in the UK, where he founded the company DV8, for which this work was made, though it is being performed and presented here by Ballet Rambert and Sadler’s Wells.

The eight male dancers are excellent in their mostly brutish manner. Different characters emerge, a couple more sensitive than the others, and there is some powerful dancing.

This can be seen in complex physical “conversations” between bodies early on, before the booze takes over, as well as distinctive solos and ensembles. Newson is a clever dance theatre choreographer who animates his performers with attractive bendy movements that are both enjoyable to watch and interesting to interpret.

One of the stars of this performance was Nelson Earl, a former Sydney Dance Company member who spearheaded much of the aggression with accomplished skill. There were also memorable portrayals of a Superman figure and the odd man out who got his thrills from a blow-up female sex doll.

Newson talks about jokes in Enter Achilles but I seem to have missed them. This may have been due to my review seat being in the back row of the theatre up against the lightbox. But, as on my first viewing of this work so long ago, I find the violence overwhelming.

The destruction of the blow-up doll, the token “female”, first kicked around like a football then sexually abused, broken and deflated, is shocking and distressing. And it is worrying that some in the audience – young women included – appeared to be excited by it, literally screaming their delight. Surely this was not the intention?