New federal environment laws will be created next year to respond to the dire state of native animal populations and declining ecosystems revealed in a landmark report publicly launched by Environment and Water Minister Tanya Plibersek.

Australia will also conserve 30 per cent of its land and 30 percent of its sea areas by 2030 in line with the UN Convention on Biological Diversity, and explore the creation of new national parks and marine protected areas, Plibersek told the National Press Club on Tuesday. 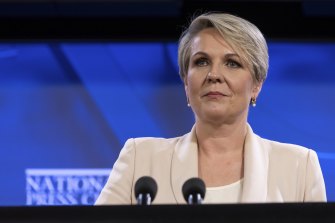 Minister for the Environment and Water Tanya Plibersek: “The precious places, landscapes, animals and plants that we think of when we think of home may not be here for our kids and grandkids.”Credit:Alex Ellinghausen

In her first major speech in the portfolio, Plibersek released the State of the Environment 2021 report, which finds Australia has suffered catastrophic losses of wildlife and habitat.

Since 2016, when the previous State of the Environment was released, 17 mammal species were either added to the endangered list or upgraded to the critically endangered list, as well as 17 birds and 19 frog species.

“Individually, every one of these revelations is dreadful, but it’s only when you think about the cumulative impact that you begin to get the full picture of environmental decline,” Plibersek said.

“If we continue on the trajectory that we are on, the precious places, landscapes, animals and plants that we think of when we think of home may not be here for our kids and grandkids.”

She promised the Albanese government would formally respond to the Samuel Review, a 10-yearly assessment of federal environment laws that found urgent action was needed to fix big holes in the environmental protection regime.

Land clearing is listed as a top cause of wildlife losses with 7.7 million hectares knocked down between 2000 and 2017. But the federal government only assessed seven per cent of this activity, the State of the Environment report found.

Plibersek pledged to create new environmental legislation in 2023 and to establish a new Environmental Protection Agency as a watchdog on federal protections – but said widespread consultation was needed before it could be finalised.

Roughly 26 per cent of Australia’s landmass is currently under conservation, but Labor’s pledge to protect a further 4 per cent, to take the total to 30 per cent, would cover an additional 300,000 square kilometres – which is larger than Victoria and Tasmania combined.

The United Nations has set a high bar for conservation areas, which are required to be representative of all the country’s ecosystems and well-connected.

Deakin University Professor Euan Ritchie, an expert in wildlife ecology and conservation, said scientists’ calls for action had been largely ignored for decades and powerful new protections and massive investment was needed to halt further losses of native flora and fauna.

“It’s not enough to just respond to the Samuel review. We need to see a tremendous increase in environmental spending in the order of billions per annum,” Ritchie said. “It’s a tiny percentage of Australia’s total budget and a lot less than $100 billion for submarines.”

“There is no more time to lose and there cannot be endless consultation,” she said.

“The foundations were laid by the Samuel Review, in particular its recognition of the need for national, legally enforceable environmental standards. We also really need to get to the bottom of how the Environmental Protection Agency will work and make sure it is truly independent.”

Plibersek also revealed that it was unlikely government could meet the deadline for the $13 billion Murray Darling Basin Plan to recover water from agriculture to improve the environment of Australia’s largest river system.

“I think it will be, well- I have to be honest with you – next to impossible given where we are starting from,” she said.

The plan requires 450 gigalitres of water, which just 10 per cent shy of the volume of Sydney Harbour, be recovered for the environment. But following a decade of inaction from previous Coalition governments, just 2 gigalitres of this has been secured.

“It’s extremely challenging to meet that target and to meet it on the timeframes that have been set,” she said.

It’s unclear what the government will do to speed things up.

On an interview on the ABC’s Afternoon Briefing, the Shadow Assistant Minister for Climate Change Hollie Hughes said, “climate change is not Australia’s problem, it is not a regional problem”.

“Our emissions are 1.3 per cent. We can shut everything down and we will make zero difference but we don’t see any moves by this Labor government to call out China for its omissions that are increasing.”