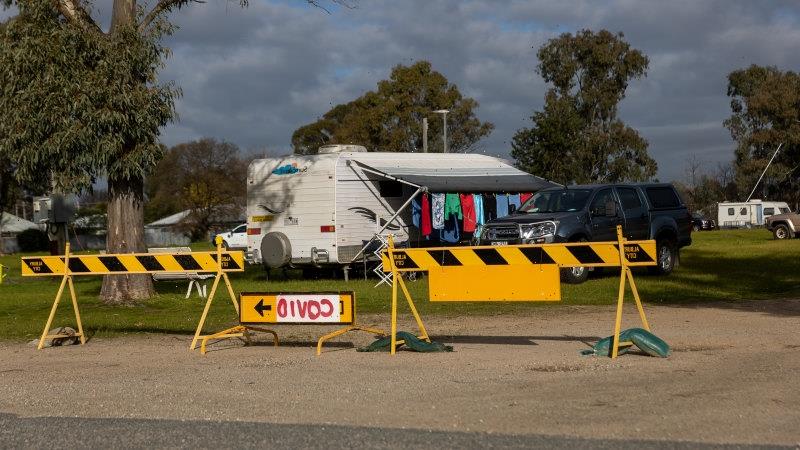 Displaced Victorians unable to return home from NSW have started gathering at the Albury Showgrounds in caravans and tents in scenes reminiscent of the Spanish flu pandemic a century ago.

Dozens of travellers have stopped at the site just north of the border in recent weeks to complete 14 days’ quarantine inside the “border bubble”, prompting the Showgrounds Trust to cancel the usual five-day limit for campers. 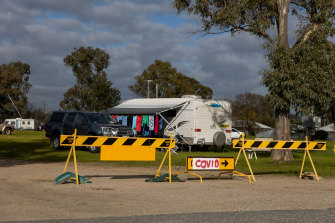 Albury Showgrounds has become a pop-up quarantine hub for displaced Victorians, next door to a COVID-19 testing centre.Credit:Jason Robins

As NSW recorded an all-time daily high of 390 new cases on Friday, Premier Daniel Andrews reiterated his commitment to the toughest border rules since the start of the pandemic where only those with rare exemptions can enter the state.

Data released to The Age by the Victorian health department on Friday shows that just 770 of 12,606 applications for an exemption – or about 6 per cent – have been approved since July 20. Reasons such as moving from NSW for work or non-urgent medical purposes are “unlikely to be granted”, a spokesman said.

In addition, some Victorian residents have been allowed to return home after quarantining and receiving multiple negative tests on the NSW side of the border.

Not since 1919 have the Albury Showgrounds acted as a quarantine camp, when rows of tents housed Victorians unable to cross the border. In that case, the NSW government had banned them from entering as Spanish flu case numbers rose in Melbourne. 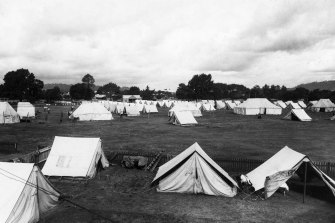 Over the past month, numbers have fluctuated at Albury Showgrounds with about six caravans set up on Friday, including that of Kevin and Pauline Davis.

Their home is in Corryong, a 90-minute drive away, but the couple has been stuck at the showgrounds for a week. Mr Davis celebrated his 79th birthday there on Friday.

“We thought we’d be fine if we stayed away from Sydney and the coast, we made it up to Kingaroy [210 kilometres north-west of Brisbane],” Mr Davis said. 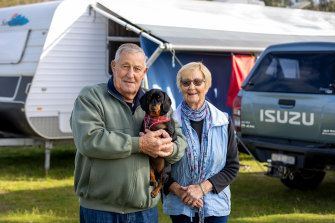 Kevin Davis celebrated his 79th birthday at the Showgrounds on Friday with wife Pauline and Tilly the dog.Credit:Jason Robins

“Once we got there I was suffering extreme heartburn then had a heart attack and had to spend a week in hospital.”

Mr Davis was discharged and the couple left Queensland for Victoria, only getting as far as Dubbo in central NSW by the time Victoria declared the entire state a red zone and banned all entrants on July 11.

“Now we’ve hit the bloody Murray River and can’t get past it. My granddaughter tried to get us a medical exemption. I’m short of breath and need to see my cardiologist, I may need a stent or pacemaker put in,” Mr Davis said.

“That was rejected and we’ve now been told if we stay here for two weeks and get tested three times, we can go home.” 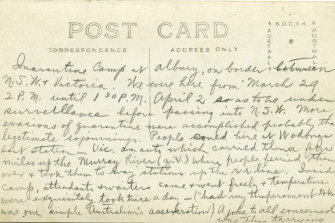 Mr Davis said each caravan awaiting their trip across the border had kept to themselves the last week – a stark contrast to 1919, when the camp was host to cricket games and a local magazine.

Mary Sheehan, who is studying a PhD at Melbourne University specialising in the Spanish Flu pandemic, said the political circumstances were similar albeit with the tables turned: the NSW government grew frustrated at Victoria’s inability to contain cases.

“The showgrounds camp accommodated 220 people in army tents, where they were told to stay for seven days before travelling on,” she said.

“Our border should be a COVID-19 bubble for those who live around it, not a wall. This is not Berlin or Belfast,” the Liberal member for Benambra said.

Yet with cases growing in NSW almost six weeks into the state’s lockdown, the Premier said on Friday that the “incredibly difficult” choice to close the border and only approve exemptions in the most exceptional circumstances remained necessary.

“The permit’s there to keep everyone safe. I know it’s incredibly heartbreaking to say no to some people who genuinely want to come here for the best of reasons … [but] if it can get to Byron Bay, only a fool would think it couldn’t get to Albury. We’ve got that border shut for a reason.”