The three senators who will decide the fate of the government’s contentious industrial relations bill say they don’t have enough time to scrutinise the wide-scale changes in the three weeks they have been given.

Escalating concern from crossbenchers over the bill comes as the government will seek to highlight the less controversial aspects of its proposed new laws, which include a ban on job ads that advertise pay rates below the minimum wage. 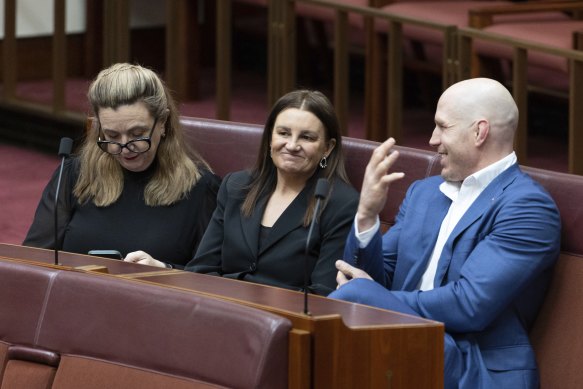 Crossbench MPs are joining business groups and the Coalition in voicing concern at proposals to force businesses into multi-employer bargaining and mandatory arbitration if they refuse a request by an employee for more flexible work arrangements.

Many are concerned the changes could give unions too much industrial power to negotiate pay deals across several companies at once and launch widespread industrial action.

Labor and the Greens voted to refer the bill to the education and employment committee and to report back by November 17, against the wishes of the three crossbench MPs whose votes will be critical.

With the Greens likely to support the changes, the government needs the vote of one more senator to pass the legislation, which will apply to millions of workers.

One Nation leader Pauline Hanson and United Australia Party senator Ralph Babet have both suggested they would not support the bill in any form.

This means the government needs the support of one of either ACT independent David Pocock or Tasmanian senators Jacqui Lambie and Tammy Tyrrell.

Lambie said it was a “complex bill” and there was a “fair bit in it”.

“Tammy and I will do our best to look over this and consult with our communities, the way we would with any other bill,” she said. “But it looks like it’ll be pretty hard to do that in the time the government’s given us.”

Pocock said crossbenchers needed time to consult and examine the legislation to “ensure we get it right”.

“These are huge and, in many respects, welcome reforms to industrial relations law that will impact workers and businesses across Australia,” he said.

“The Senate is the house of review and allowing only three weeks for an inquiry into such complex legislation that will have such a big impact is not enough time. Especially when one of those weeks will be taken up with Senate estimates.

“The government says there is an urgency to legislate but I’d argue that legislating in February after thorough consultation is better than rushing it through by December. That is not a significant delay and would help ensure we get this important legislation right.”

Allegra Spender, who represents the lower house Sydney “teal” seat of Wentworth, said the country needed industrial relations reform to lift wages and economic growth, but the government was “going about it the wrong way”.

“The last time there was a 21-day committee hearing was with the WorkChoices bill, and we know how that ended up.”

Spender said she was concerned that small business could be forced into multi-employer bargaining under the changes.

“The threshold is 15 people – so a busy cafe with 16 casuals and weekender people … could be forced into multi-employer bargaining,” she said.

She also said there appeared to be an opportunity for “sector-wide or industry-wide striking or certainly much more striking than there is currently, and I think there’s a real there’s deep concern about that”.

“The business community I’m speaking to doesn’t understand the rationale for why they need to be forced into multi-employer bargaining, and there is a real concern out there,” Spender said.

“If you’re going to have good IR for reform, you actually need both the business community and the unions on board or otherwise we will go we will end up having another bitter, bitter fight about this.”

With the more contentious changes, some of the other reforms in the bill went largely unnoticed during the week.

Job ads that deliberately seek to underpay employees, including migrant workers, will be banned under the changes. The ban will crack down on job ads advertising pay rates below award wages or the minimum wage.

Industrial Relations Minister Tony Burke said while most employers did the right thing, some used job ads to target workers for underpayment.

He said migrant workers and workers from diverse backgrounds were particularly targeted.

“Migrant workers have the same protections as Australian workers. Yet we have seen report after report of the exploitation and neglect they have suffered,” Burke said.

“I will never forget the story of Kate, a Taiwanese horticulture worker, who was forced to eat from public rubbish bins just to survive while earning $4 an hour on an Australian farm.

“These changes are aimed squarely at protecting people like Kate.”

The cap on claims that can be pursued through the small claims process under the Fair Work Act would be raised from $20,000 to $100,000.

This will mean more workers won’t have to go through a full process through the courts, which is usually more expensive and time-consuming.