The Earl and Countess of Wessex met crowds outside Buckingham Palace yesterday to thank them for their support and well wishes following the death of Queen Elizabeth II. But a video has been doing the rounds on social media showing Prince Edward’s hesitancy toward shaking people’s hands. Express.co.uk spoke to body language expert Judi James.

In the video, Prince Edward is seen walking along the crowds and asking them where they have travelled from.

He said: “Where are you from?” And a couple of people replied: “Newcastle and Felixstowe.”

Keeping his hands to himself, despite several offering theirs out to be shaken, Prince Edward explained: “Look I would love to shake your hands but have you seen how many people are here? It would fall off but thank you for your support.” 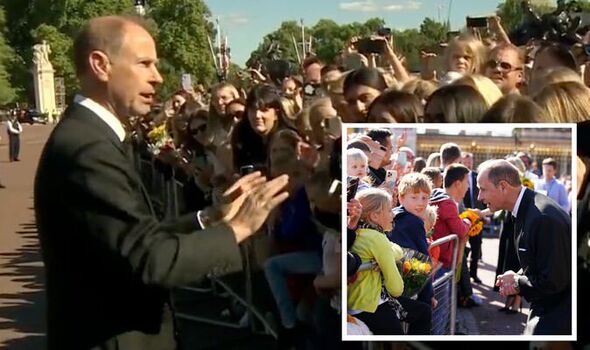 Later in the day, he was seen shaking a few people’s hands, but rather reluctantly.

Sophie, on the other hand, moved along the barrier, shaking as many people’s hands, and accepting flowers from them.

Having watched and analysed both Edward and Sophie’s walkabout yesterday, Judi said: “Edward and Sophie’s body language has been pitch-perfect recently with their open displays of relatable grief and Sophie in particular’s ability to appear warm, normal and down-to-earth while retaining a regal air.

“Edward might have made a serious mistake with his body language here, though.

“Charles and William were totally immersive with the crowds on their walkabout, shaking and touching as many hands as were offered and managing to look as though they were taking their time to make individual connections rather than rushing.

“He even steps back and holds his hands out as though keeping the crowds at bay.

“When you hold your hand out to shake or touch and it is refused it feels like rejection.

“This appears to distance Edward from the public visibly.

“He clearly has valid and non-insulting reasons for not wanting to shake hands.

“He is also explaining those reasons to the crowd and they sound self-effacing rather than superior but sadly it’s often the visual image that counts,” she commented.

Following their walkabout, Prince Edward and Sophie attended the Grandchildren’s Vigil at the Palace of Westminster last night.

Their children, Lady Louise Windsor, 18 and James, Viscount Severn, 14 joined their cousins for a 10-minute vigil alongside their grandmother’s coffin.

This evening, the Earl and Countess of Wessex will probably attend a reception at Buckingham Palace.

King Charles and Queen Consort Camilla are hosting world leaders and official overseas guests at the palace in what is described as an “official state event”.