Well, folks, it’s officially been a year since Meghan Markle became the Duchess of Sussex at one of the most gorgeous weddings of all time. It’s no secret that Prince Harry and Meghan have a seriously adorable love story, and now that they’re also new parents to the perfect Archie Harrison Mountbatten-Windsor, they have a truly magical life together. So, in honor of their one-year wedding anniversary on May 19, I reached out to experts to compare Prince Harry and Meghan Markle’s body language at their wedding versus now. After all, a lot can happen in a year, and for these two, a lot did.

Prince Harry and Meghan got married on May 19, 2018 at St. George’s Chapel at Windsor Castle in England. People from all over the world tuned in to watch the fanfare, and it’s no secret that the two were positively glowing with joy and love. So, now that they’re a family of three, have things between them changed? What does their body language say about their relationship now, one year later?

Well, I spoke to body language expert Susan Constantine to gauge just how much the two lovebirds’ physical dynamics have evolved since their wedding day. Here’s what she had to say. 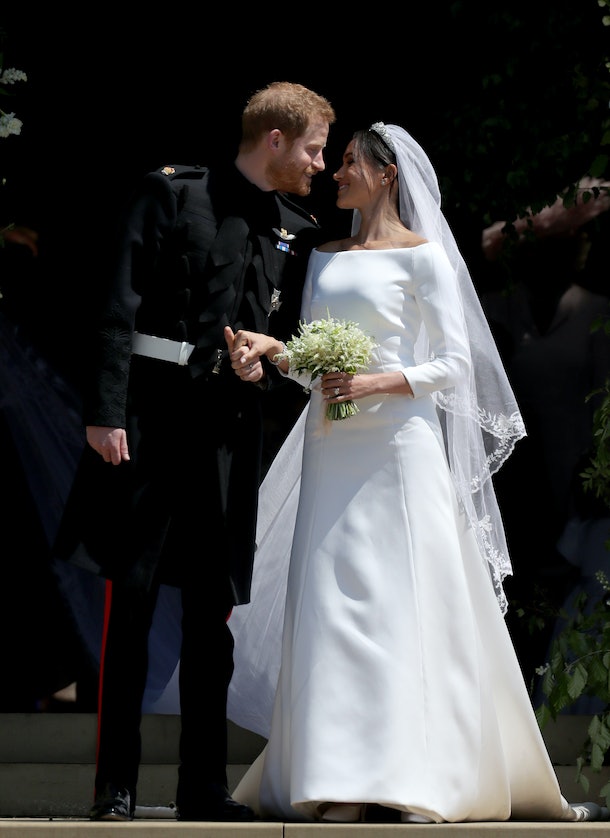 At this point during the wedding, the ceremony was over, and the newlyweds went outside to greet their adoring fans and fellow countrymen. They’re all smiles here, and according to Constantine, they couldn’t be more in-tune with each other. “They are mirroring each other perfectly,” Constantine tells Elite Daily. “They are so connected and their facial aspects are totally in-sync. It’s clear that they’re feeling the same excitement level and are completely mesmerized by each other.”

2. They were totally on the same page. 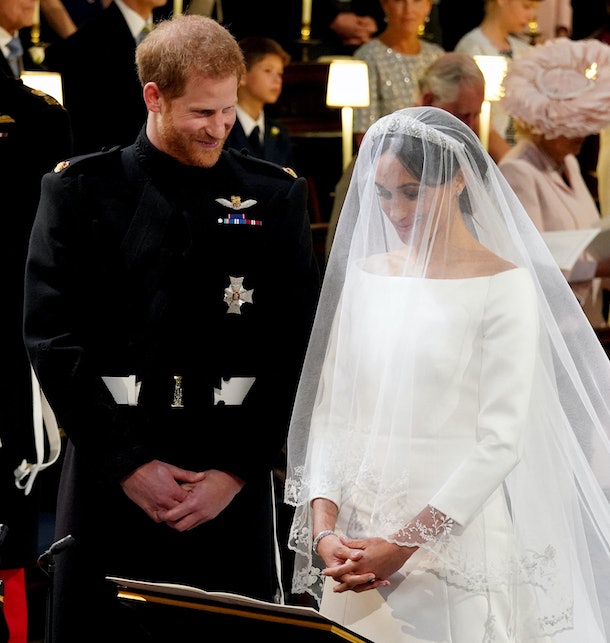 This was definitely one of the sweetest moments from the actual wedding, and there’s so much love between the couple here. Constantine agrees that the chemistry they share is truly profound. “Again we see their bodies and faces mirroring each other,” observes Constantine. “I have to say, it’s not often that I see body language that’s this strong between any couple. They really have something special.”

3. They fit comfortably into their complementary roles. 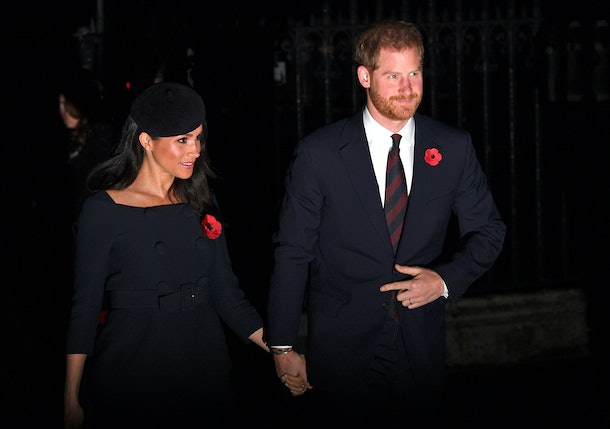 This photo, taken in November 2018, was right around the couple’s six-month wedding anniversary. Based on their body language, they’d settled into newlywed life a bit but still had more time to themselves than they probably do now that they have a baby. Constantine points out that it’s clear they’re both embracing their roles as a traditional royal couple, but their energy has shifted a bit. “He’s the leader, as can be seen in his diplomatic hand gesture and she’s taking more of a submissive role, but they seem to really enjoy this dynamic as they are both strong individuals,” explains Constantine.

4. At this point, there was some caution in their expressions. 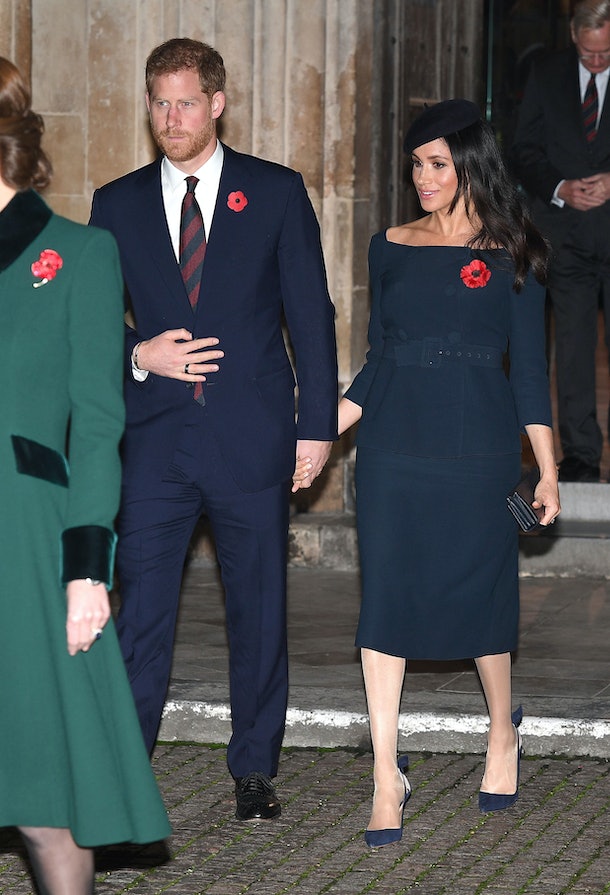 I swear, these two always look so amazingly striking together. Even when they’re politely acknowledging photographers (which is probably exhausting after a while), they still manage to keep their composure. “Here there’s a little bit of caution and apprehension on their faces, but this could be because they are in the public eye,” says Constantine. “You can tell the realities and responsibilities of being a royal couple have started to sink in.” 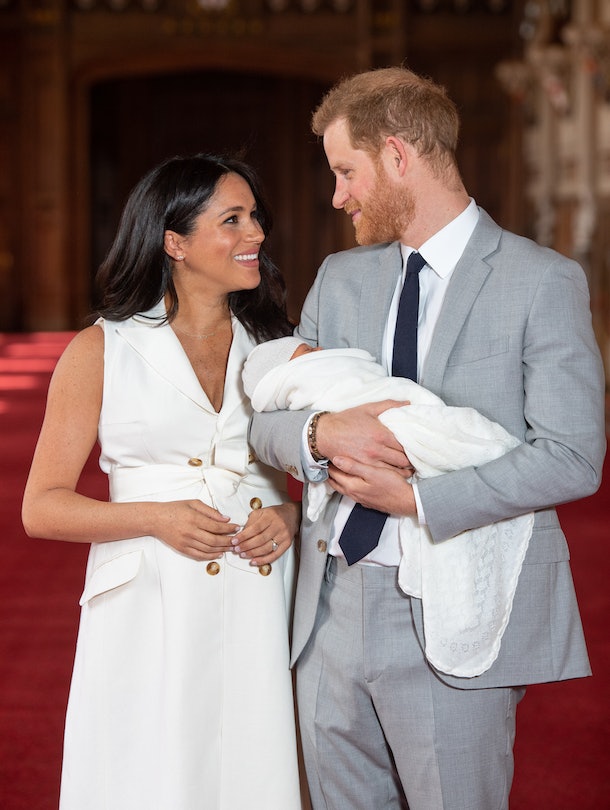 On May 8, just 11 days before their one-year wedding anniversary, Prince Harry and Meghan introduced their son, Archie Harrison Windsor-Mountbatten, to select members of the press. (And, you know, the entire world.) They look positively glowing, and it’s so sweet. According to Constantine, it seems like they’re transitioning into family life with ease, even though, at that point, Archie was only six days old. “Look at how the baby is forming a triangle with the head facing toward Meghan,” observes Constantine. “This shows they’re equal partners now and a solid family unit. We can also see that their smiles and eyes are connected on a cellular level.”

6.They’re super supportive of each other. 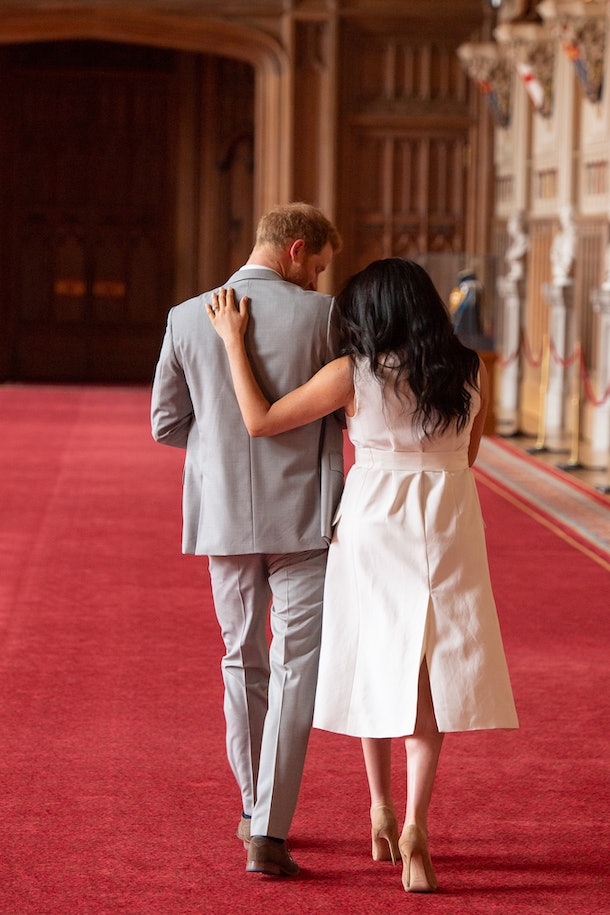 As Prince Harry and Meghan walked away from the press, the world caught a glimpse into their relationship dynamic. “This is such a supportive gesture on Meghan’s end,” says Constantine. “They are so close and it’s clear to see that their baby is the focus of all of their energy. There’s so much deep love and admiration, they’re definitely going to last a lifetime.”

It’s not hard to understand why Prince Harry and Meghan seem so completely taken with each other, and now, with their son. They seem happy beyond any doubt, and their body language echoes that. They don’t just have smiles plastered on their faces. If their body language is any indication, they really are that happy.