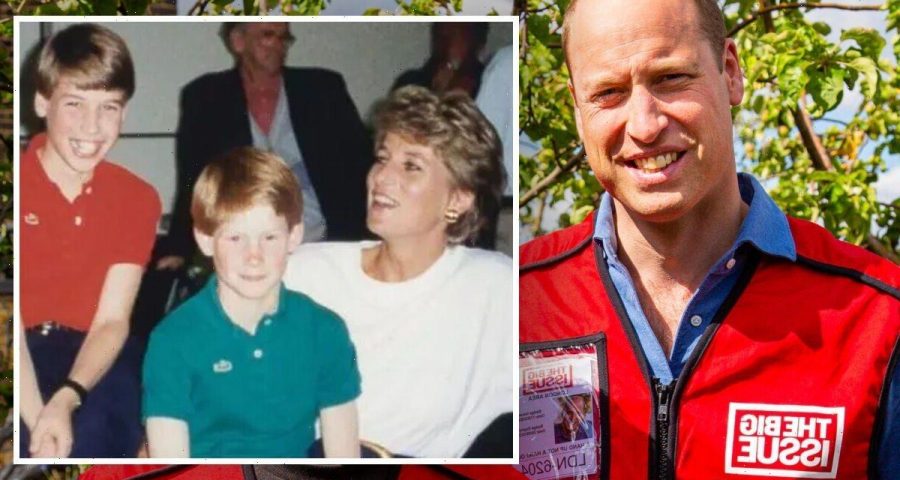 Prince William has pledged ahead of his 40th birthday to continue “shining” a light on the “solvable issue” of homelessness. The Duke of Cambridge has also expressed wishes to introduce his children to charities supporting rough sleepers. Prince William has long championed the cause of ending homelessness. In 2005, he became the patron of Centrepoint, a charity that offers housing and support for young people across the UK.

William is the cover star of the latest issue of the Big Issue after he joined a seller on the streets of London earlier this month.

The Duke even wrote an article for the magazine about his experiences.

As a child, William was introduced to homeless shelters by his mother Princess Diana.

His actions now are echoing the legacy of the late Princess of Wales.

Royal commentator Russell Myers appeared on Lorraine this morning to speak about these experiences.

Lorraine said: “This is something that he’s been involved with since he was a kid because Princess Diana made sure that he knew about the problem!”

Russell added: “Exactly, it was one the pillars of her work, look at this picture back in the late 1980s!

“She was visiting homelessness charities and she wanted to take the boys to these centres and really get to grips with the issue.

“Unfortunately it hasn’t gone away and as William says, it might never go away because there are always problems that are revolving.

“But it’s about what can we do to solve what’s going on.”

Lorraine commented: “Exactly, you never know people’s stories or how they ended up there and actually how easy it is sometimes too to find yourself in that terrible situation, good for him!”

Prince William tweeted this morning: “I have always believed in using my platform to help bring attention and action to those who are struggling and I commit to doing what I can to shine a spotlight on this solvable issue not just today, but in the months and years to come.

“I was 11 when I first visited Passage Charity with my mother and since then, homelessness has stuck with me as an issue I want to fight for.”

When it came to parenting, Diana regularly broke from tradition.

The Princess chose to take William with her on her first overseas tour in 1983 when he was nine months old.

This was despite the Queen leaving a young Prince Charles in the care of nannies when she went on royal visits.

William and Harry also did not have any homeschooling like many royals before them.

Aside from taking the boys along to formal engagements, Diana also made the boys do plenty of normal activities outside of their royal appearances.

They were once pictured leaving Kensington having watched Disney’s Jungle Book.

They also visited Thorpe Park, with several photographs from a trip in 1993 showing Diana laughing while aboard some of the rides.