Leave it to Kelly Dodd to don a controversial bridal shower accessory.

The “Real Housewives of Orange County” star, 45, sported a “Drunk Wives Matter” hat while celebrating her upcoming nuptials on Sunday, as she is set to tie the knot with Fox News reporter Rick Leventhal on Oct. 10. The hat — a play on Black Lives Matter — did not sit well with many of her fans. 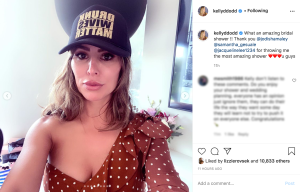 Coincidentally, Dodd’s co-star, Braunwyn Windham-Burke was not in attendance at her bridal shower. Windham-Burke, 42, is very active in the Black Lives Matter movement and even participated in a special, “Race in America: A Movement Not a Moment,” on Bravo this summer.

The bridal shower was not filmed for “RHOC,” but newbie Elizabeth Vargas attended alongside returning “Housewives” Emily Simpson and Gina Kirschenheiter. An insider told Page Six on Monday that the hat was a gift from a friend and was intended to be a joke.

Still, the reality star’s questionable headwear choice comes a little more than two months after fans slammed her for not using her platform to promote or support the Black Lives Matter movement after she noticeably left the protests out of a list of events that happened in 2020.

“Peaceful protests, black men and women killed by police, and the list goes on…of course, “riots” would be the word of choice 😡,” one person commented.

Another chimed in, “Oh and police killing black people. Cmon I thought you were learning & listening…. I’m guessing nothing sunk in.”

The reality star — who is of Mexican descent — also stated in June that she has “experienced racism” as a “woman of color.”

Dodd previously came under fire this spring when she proclaimed that the coronavirus pandemic was “God’s way of thinning the herd.” She later apologized for her remarks, but that was not the last time she stated her opinion.

Dodd then compared the coronavirus to the flu in another video, even stating: “But how many people die on a daily basis? … Well, people are going to die! I’m sorry to tell ya.”

She downplayed the virus again in May and even claimed that the virus was almost non-existent in Orange County while she went out for a meal with her family.

In a video on her Instagram Story, she shared: “No one is wearing masks here in Orange County. Yup, because nobody is dying here of the virus.” However, servers wearing masks were visible in her shot.

“I was by no means minimizing deaths that have been caused by this virus, and I feel for their loved ones,” she said after much criticism. “However, Orange County has 133 deaths out of 3 million people — much lower than most.”

The Ending of 'Gilmore Girls: A Year in the Life' Is Pretty Depressing When You Approach It From a Different Angle
World News