The Coalition and Greens have accused the Andrews government of deflecting from Labor’s internal problems by including a proposal that could strip millions of dollars from other parties among a set of integrity reforms.

Premier Daniel Andrews on Wednesday said his government would adopt all 21 of the Ombudsman and Independent Broad-based Anti-corruption Commission’s recommendations in a report about “unethical” and systemic behaviour in Victorian Labor. 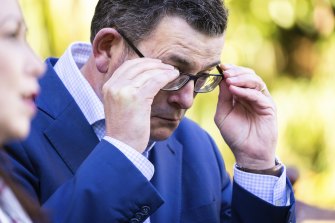 But Andrews said he would “go further” by passing new laws, which were not recommended by the independent agencies, to block parties from receiving public funding if they did not establish minimum standards to stamp out improper activities such as branch stacking. This funding equates to about $6 for every vote at an election and is the main source of funding for future campaigns because private donations are capped at a low level.

Key crossbencher Fiona Patten questioned the focus turning to smaller parties and said it was up to the major parties to “get their house in order”.

“I’m happy to support legislation, unless it becomes a burden on smaller parties,” she said. “If that requires legislation, then that probably is on them if they can’t control themselves.”

Shadow treasurer David Davis said the move to ensnare other parties in new laws was an attempt to shirk responsibility.

“For him [Andrews] to now want to point at others misses the key point: this is about him and his party,” Davis said. “He regularly tries to slide out of responsibility. This is fundamentally about failings inside the Labor Party that the integrity agencies have pointed to.

“The opposition is very prepared to look at good-faith proposals that strengthen integrity, but we will need to consider every proposal closely and the details need to be made available.”

Acting Greens leader Tim Read said the premier’s proposal “may be necessary to clean up the industrial-scale branch stacking inside the Labor Party but may not be necessary for parties that already manage their internal affairs appropriately.

“While we will consider carefully the merits of any proposed reforms, I am concerned the premier is attempting to deflect from his own party’s internal problems.”

A veteran political insider, speaking anonymously to detail his view of the government’s strategy, said it was an astute political tactic by the premier to shift focus onto other parties.

He said MPs might be concerned that the new rules would be crafted to make it harder for non-Labor parties to receive funding, which could lead to internal disunity before the election.

After integrity agencies on Wednesday morning said Victoria had become a “laggard” in parliamentary integrity, the Andrews government announced what it described as “the most significant overhaul of parliamentary oversight in the country”.

The government has yet to release details of new legislation required to prohibit public funding for parties that do not establish minimum standards. In a document distributed to media outlets, it explained new requirements for parties would include traceable means for membership payments, mandatory photo ID checks for new members, proof of eligibility to hold a concessional membership and measures to ensure compliance in using the electoral roll.

The Labor and Liberal parties have already enacted the bulk of these changes following separate branch-stacking scandals exposed by The Age. However, senior Coalition sources said the government could draft the bill to surreptitiously include changes that do not fit with the internal mechanisms of other parties.

The reshaping of the framework to police unethical politicians will include a Parliamentary Integrity Commissioner that could recommend punishments for misbehaving MPs. A new ethics committee, including government and non-governments MPs, will also be established. MPs will be banned from employing family members, ministers will not be able to direct staff to do factional work, and staff working in MPs’ local offices will be reviewed.

Most of the changes outlined in the government document appear designed to stamp out branch stacking, which involves harvesting the votes of non-genuine party members, including those who have not paid membership fees or may not even know they are a party member, to build power. The end goal is to influence who is nominated to run for state and federal parliaments. The practice is less common in smaller parties.

“These minimum requirements will apply to established parties in the parliamentary system and a threshold will determine which parties must meet the requirements. That threshold might be based on the number of MPs, the number of members in their party, or the amount of public funding they will receive,” the document stated.

“The rules will be designed as to not disadvantage new parties from being established – but rather to make sure larger and more established ones are held to the standard that taxpayers expect from publicly funded organisations.”