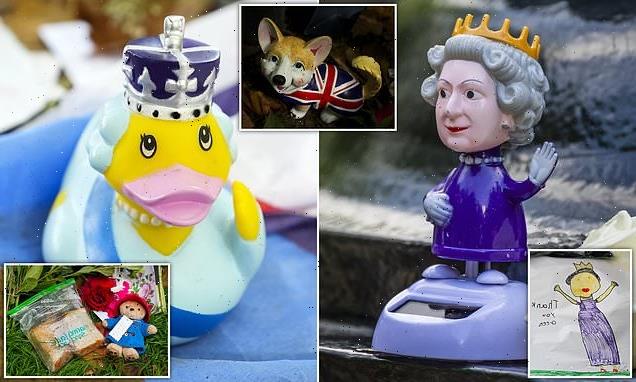 Mementoes for Her Majesty: Fans leave souvenirs including hand-drawn portraits and ceramic corgis outside Royal Palaces in tribute to the late Queen

Thousands of royal fans have been mourning the death of the Queen this weekend, and left touching tributes at her residences to honour the Monarch’s memory.

Flowers, soft toys, letters and drawings were left at the gates of the Balmoral estate, Windsor Castle, Buckingham Palace and more as the nation reacted to the news.

Some royal fans celebrated the late Sovereign with particularly quirky royal memorabilia, from solar figures of the Queen to Corgi and Paddington soft toys.

One fan left a rubber duck wearing the crown and the royal sash by the gates of Buckingham Palace in London. 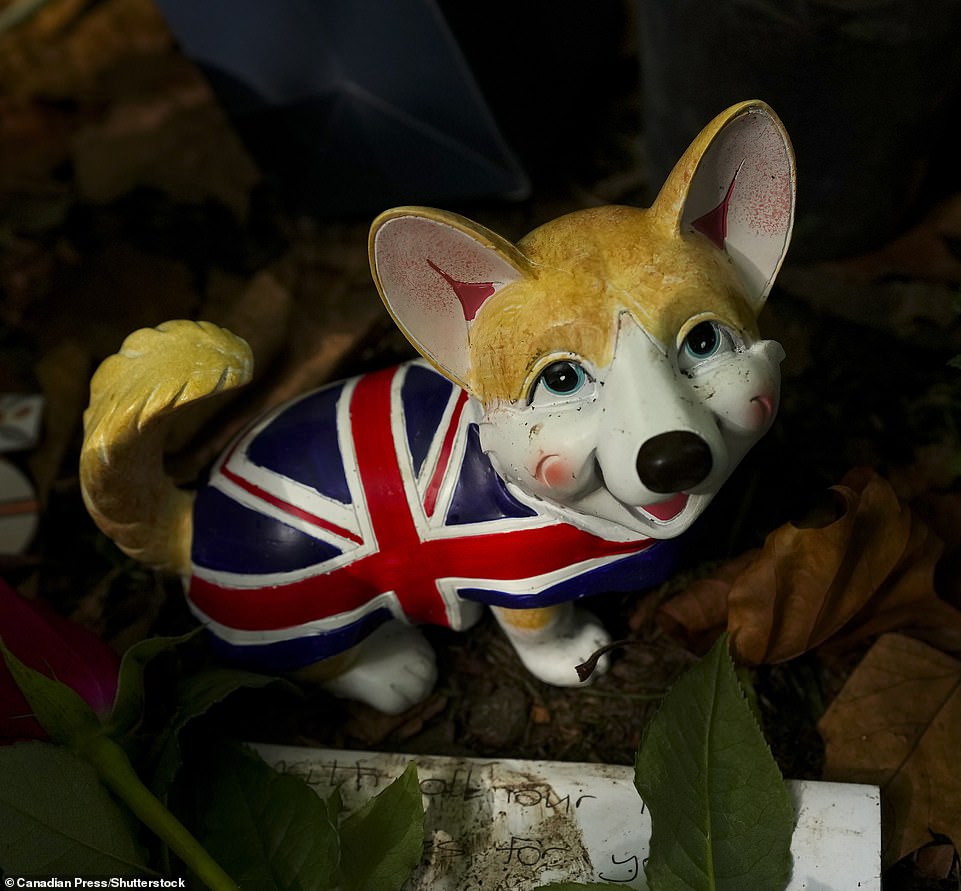 Thousands of royal fans have been mourning the death of the Queen this weekend, and left touching tributes at her royal residences to honour the Monarch’s memory 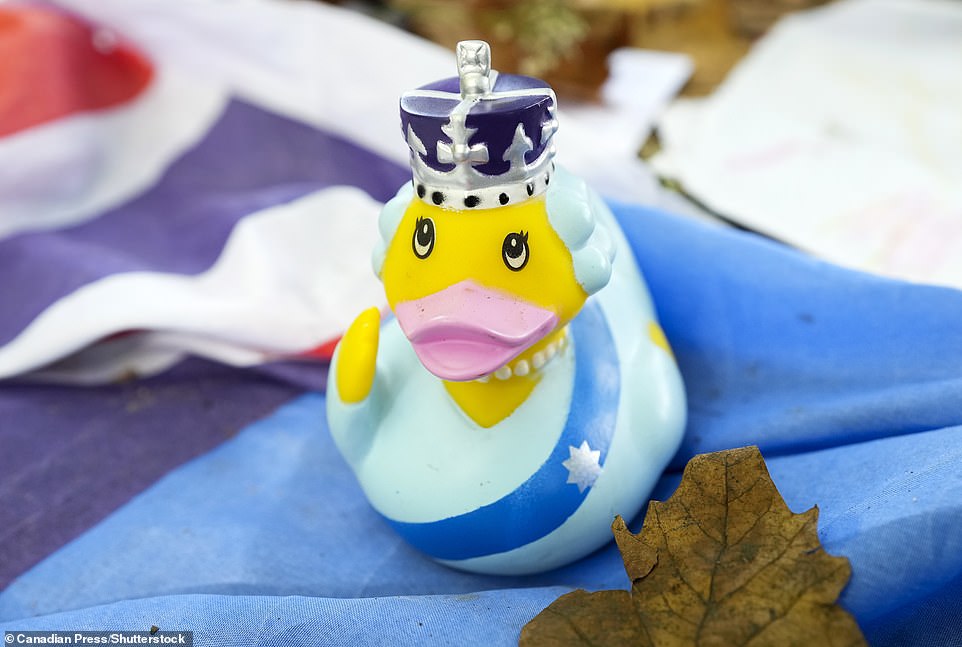 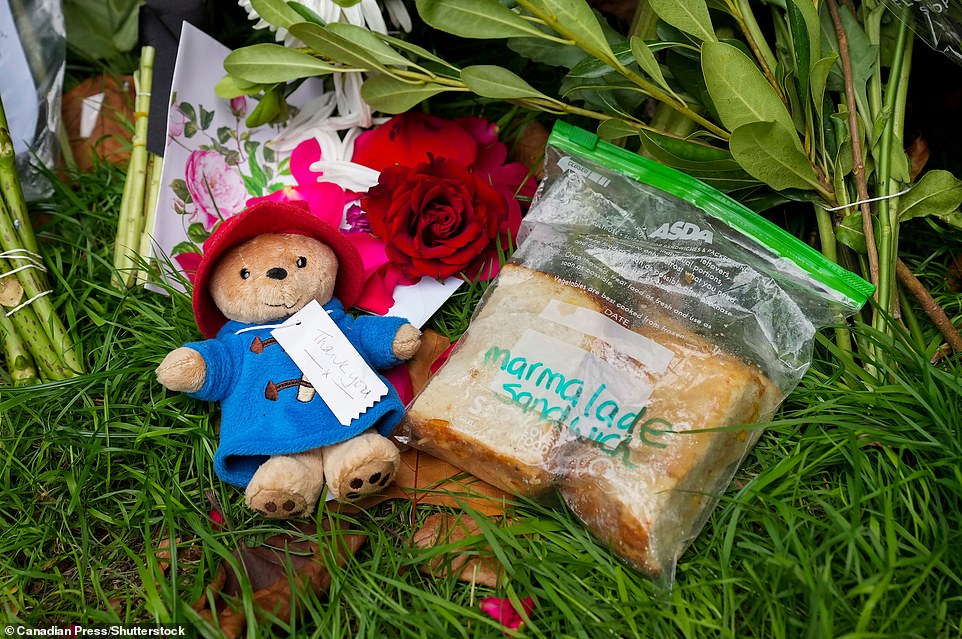 Several fans left soft toys of Paddington Bear, who appeared in a skit with the Queen during her Jubilee celebrations in June. Others also left marmalade sandwiches, which were mentioned by the Queen in the same skit

The nation is coming to terms with the death of the Monarch, who passed on Thursday at Balmoral, Scotland.

Fans from all over the world have travelled to the Queen’s royal residence to leave their heartfelt tributes.

One left a knitted doll of the Queen wearing a purple dress and signature hat with a bunch of flowers.

Another left a small solar-powered figurine of the Monarch, which normally sway from left to right and wave. 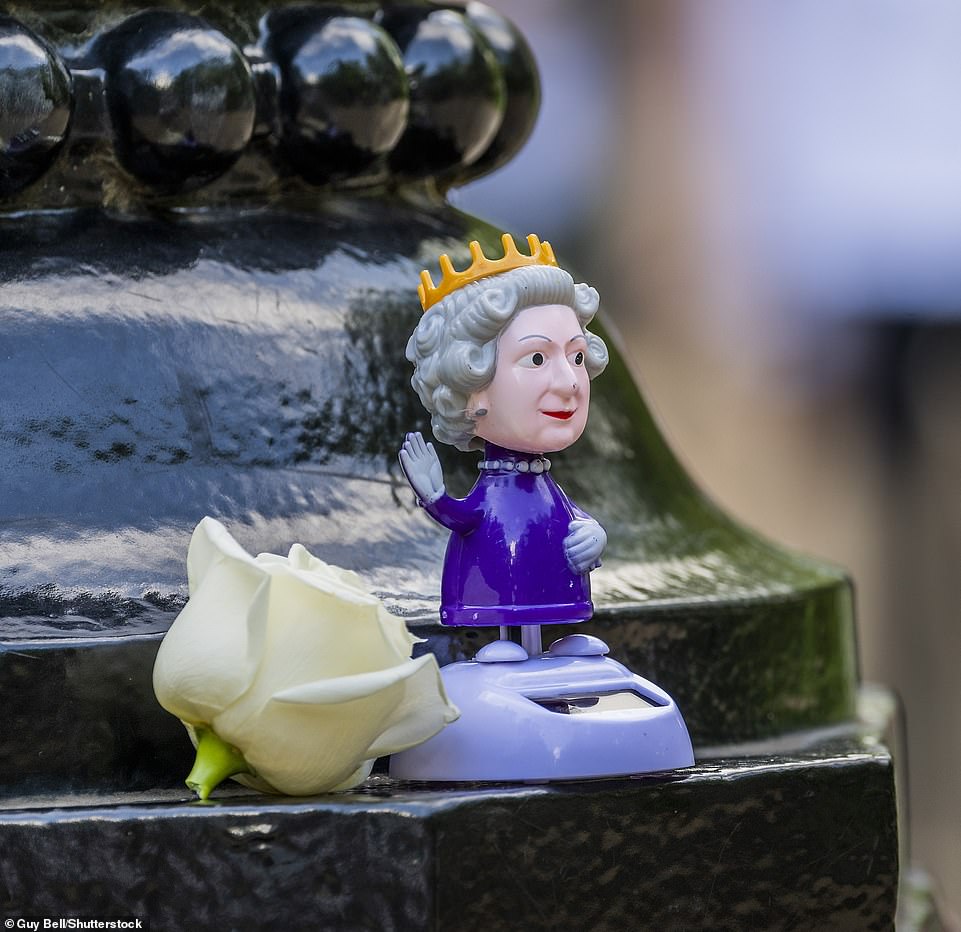 A fan left a small solar figure of the Queen, which usually wave from side to side, and a while rose in Green Park, London, on Sunday 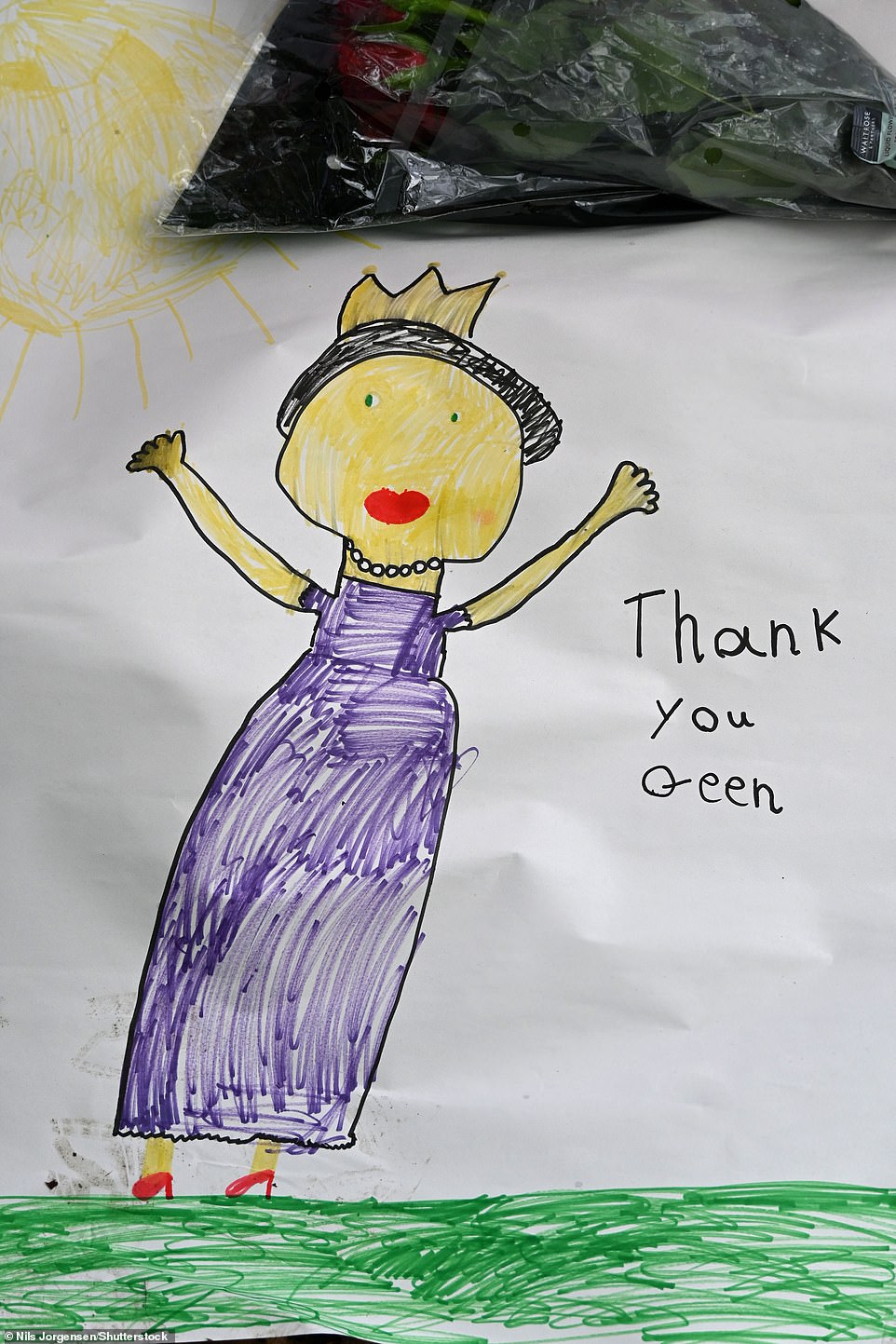 Children also left drawings of the Monarch in ballgowns with sweet words of thanks. This one was left in Green Park by a young fan 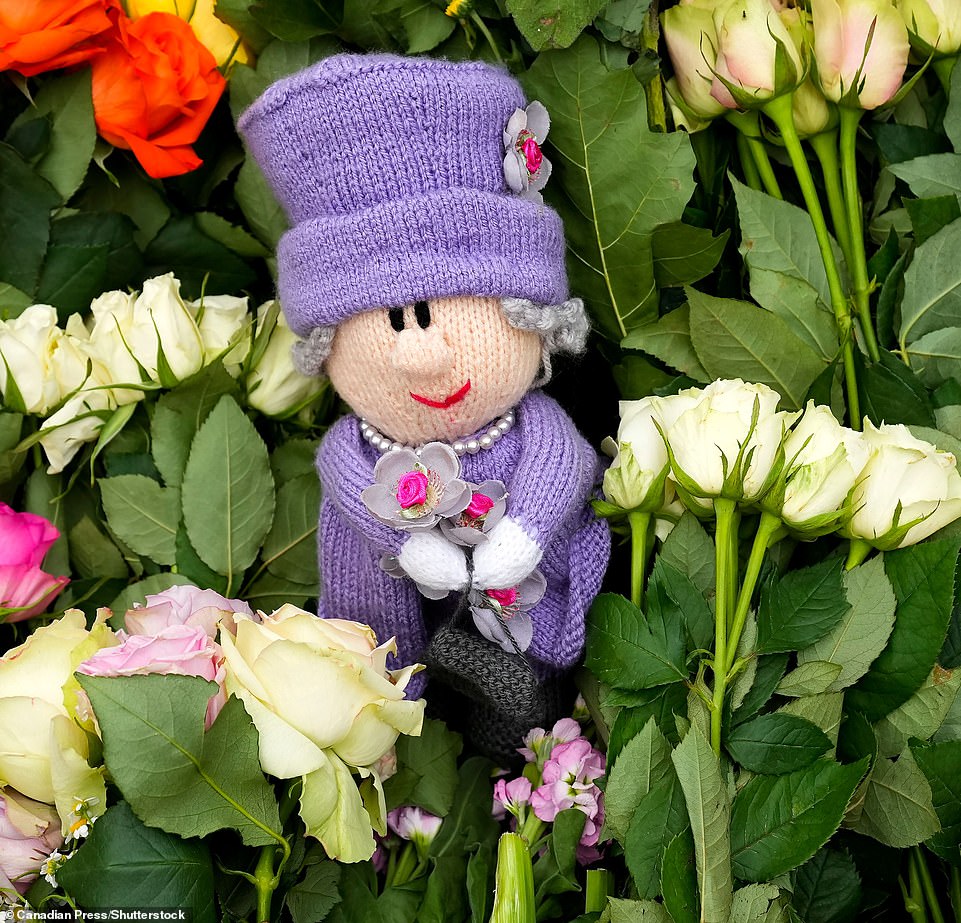 Pictured: a knitted doll of the Monarch holding flowers was also left among the blooms and card left at Buckingham Palace this weekend

Elsewhere, a fan left a soft toy of Paddington Bear, who appeared in a skit with the Queen during her Jubilee celebrations in June. Others also left marmalade sandwiches, which were mentioned by the Queen in the same skit.

Several members of the royal family came out to admire the tributes left for the Queen on Saturday.

The Princess Royal and her children, accompanied by Prince Andrew, Princess Beatrice, Princess Eugenie and Prince Edward and his wife Sophie Wessex and daughter Lady Louise Windsor, were seen taking a closer look at them on Saturday morning. 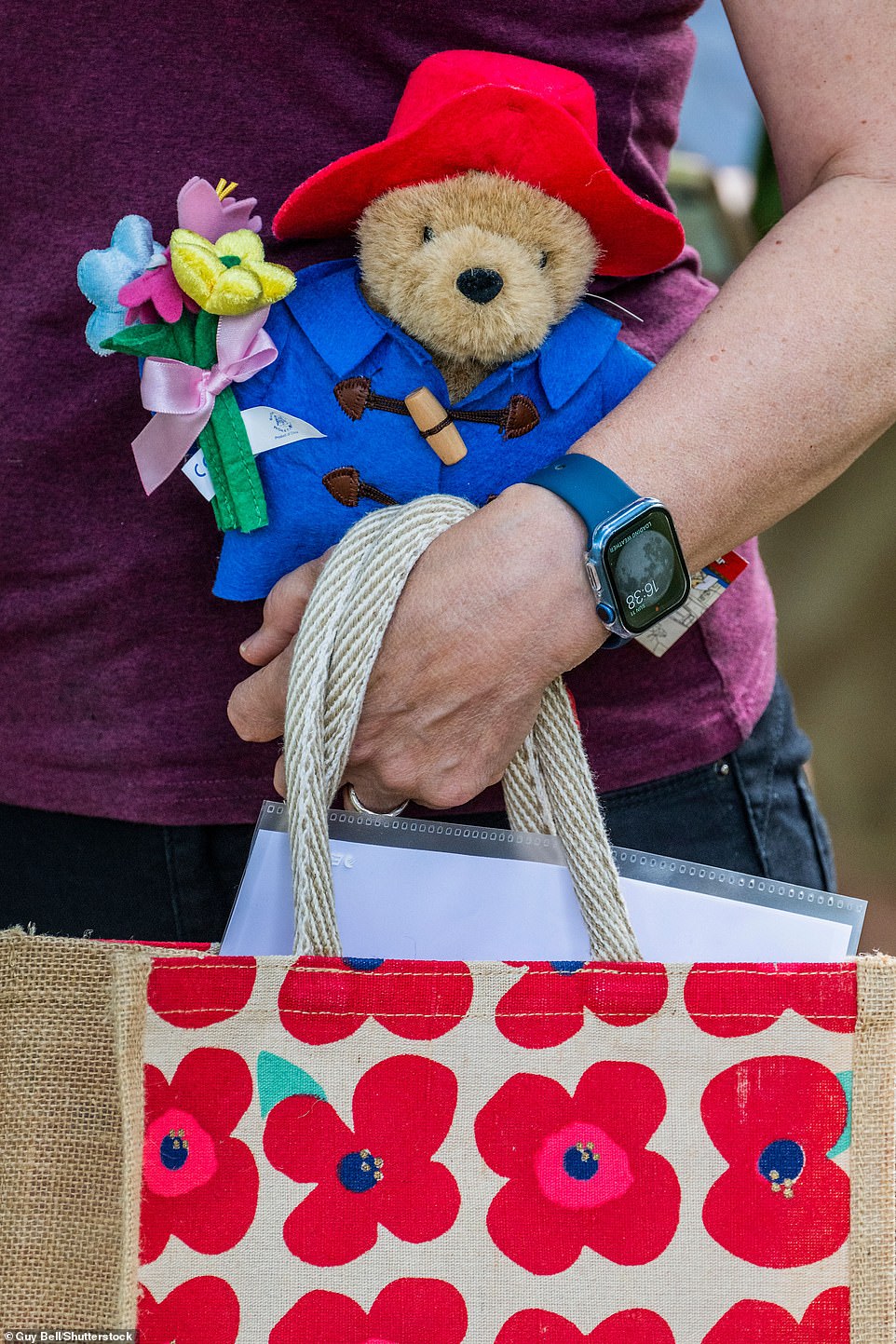 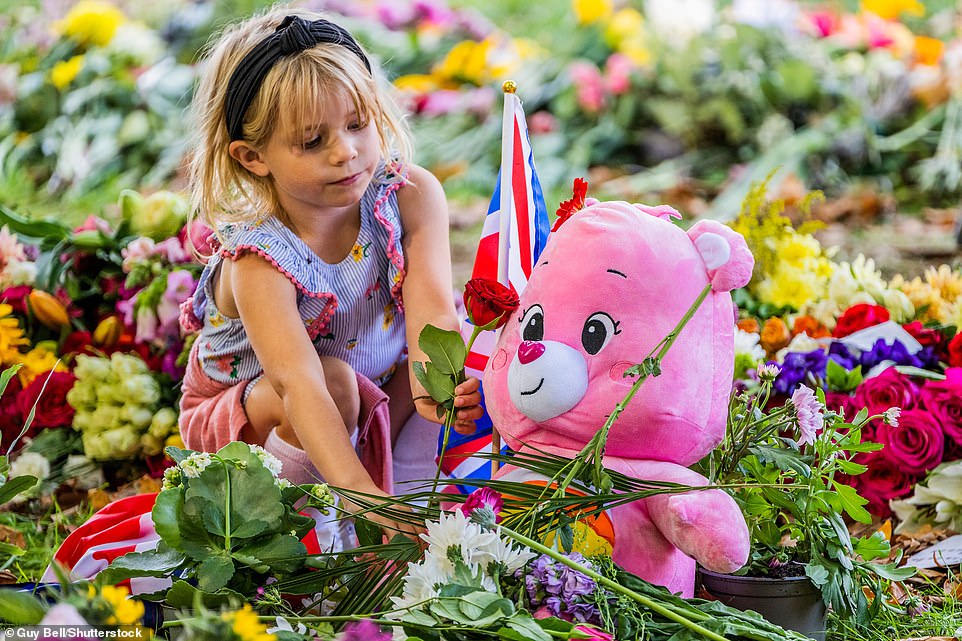 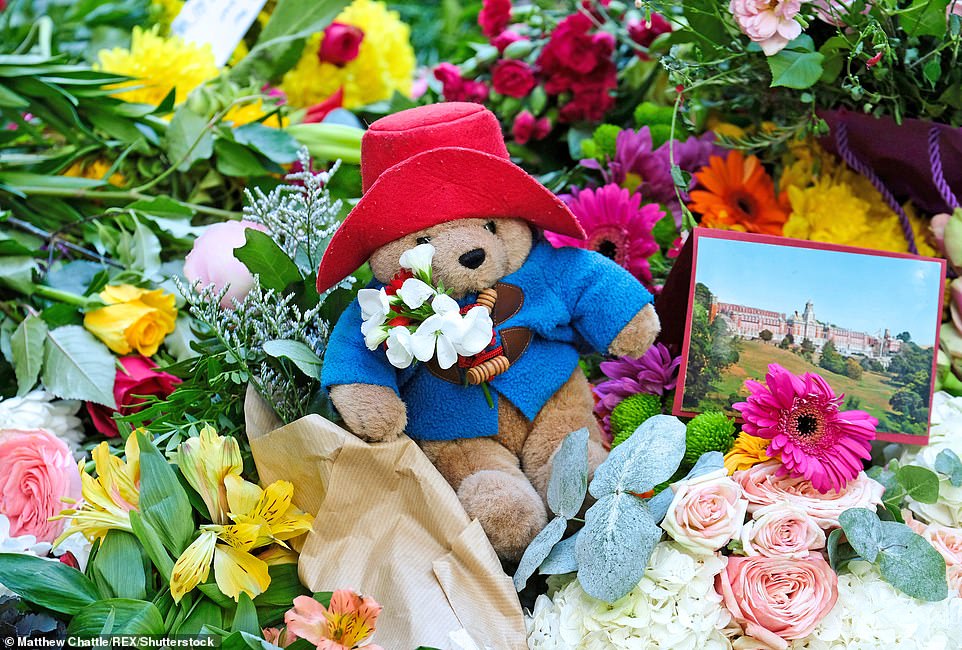 One fan stitched fresh flowers onto the jacket of a Paddington Bear soft toy, next to a postcard and several other blooms in Green Park

The sweet tributes deeply touched the Queen’s granddaughters, with Eugenie and Zara seeing wiping tears off their faces.

Meanwhile, on Saturday afternoon, the Prince and Princess of Wales, accompanied by the Duke and Duchess of Sussex, were seen admiring the tributes left at Windsor Castles.

They also did a walk about where they talked to some of the fans who had come to share their sympathies. 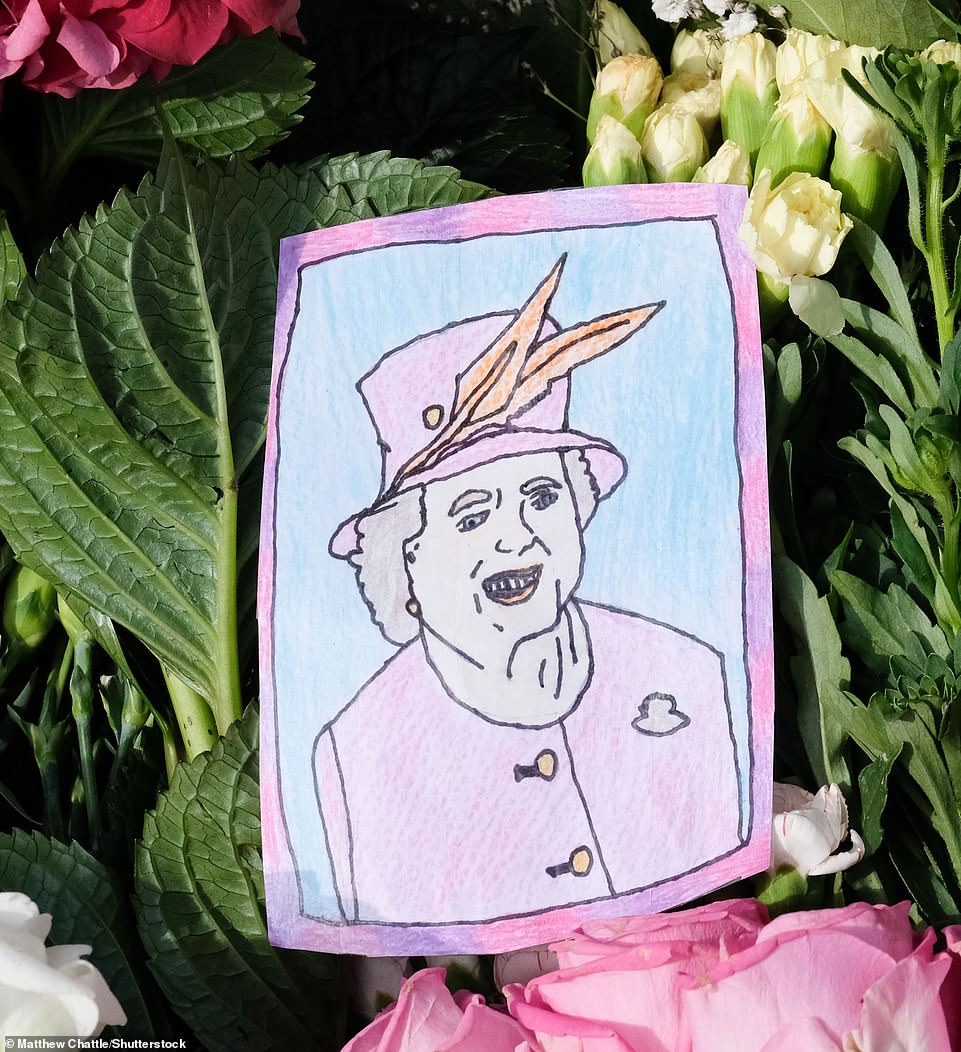 A fan left a hand drawn card of the Monarch coloured in pink and blue, which was spotted next to several bunches of roses on Sunday 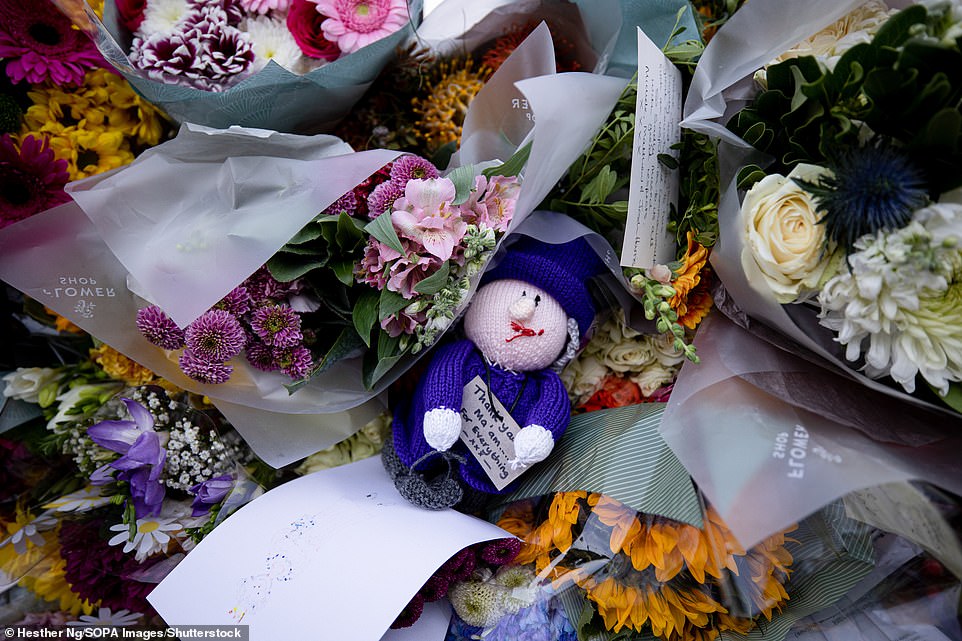 Another fan also left a knitted doll of the Quene wearing a blue dress and hat, with a note that read ‘thank you ma’am for everything’ 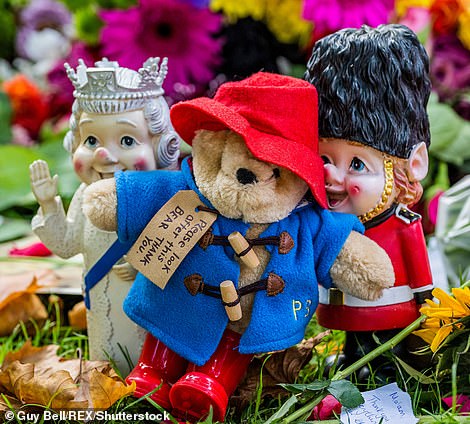 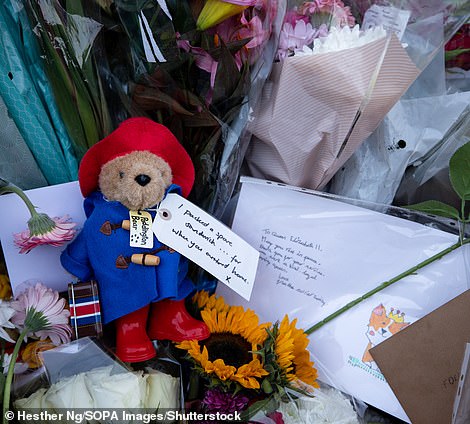 Several fans left Paddington Bears soft toy, with thank you notes. Another left laughing statues of the Queen and a royal Guard, left 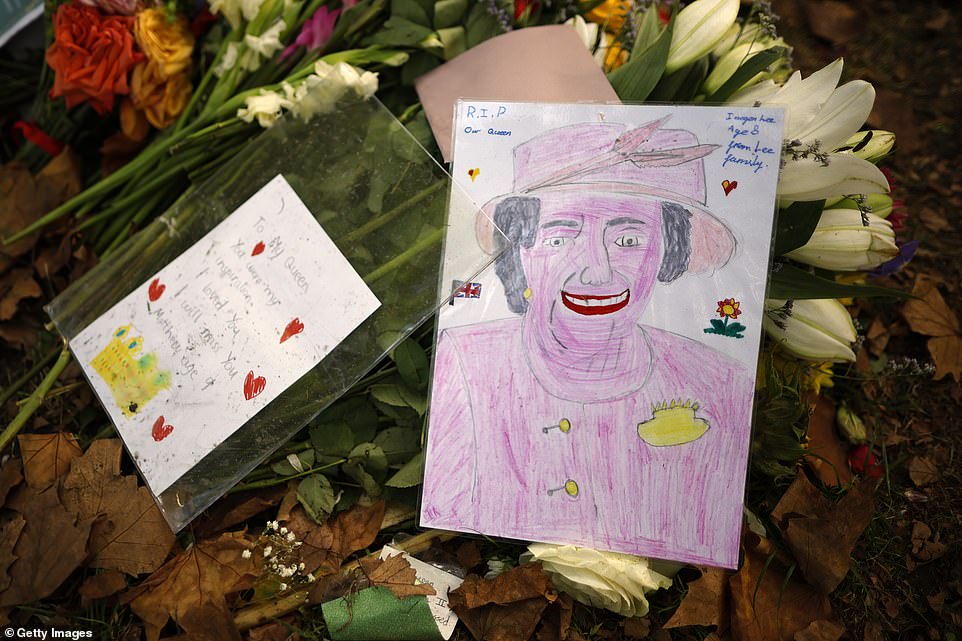 An eight-year-old fan left a drawing of the Queen all in pink which read ‘RIP,’ right, next to another card written by a fan, aged nine 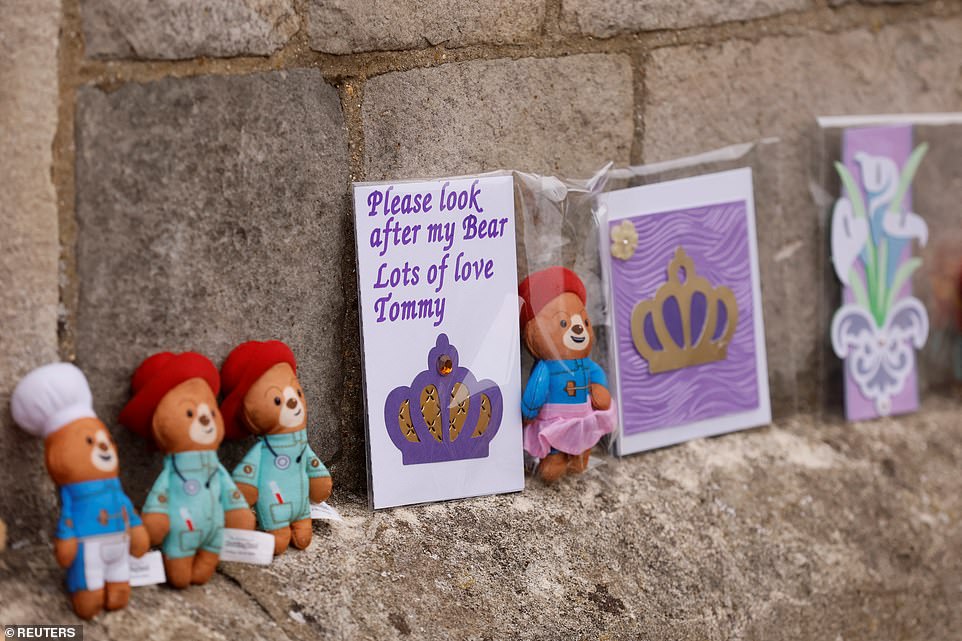 A child left their Paddington bear toy wear in a ziplog bag and a card which read ‘please look after my Bear, lots of love, Tommy’ 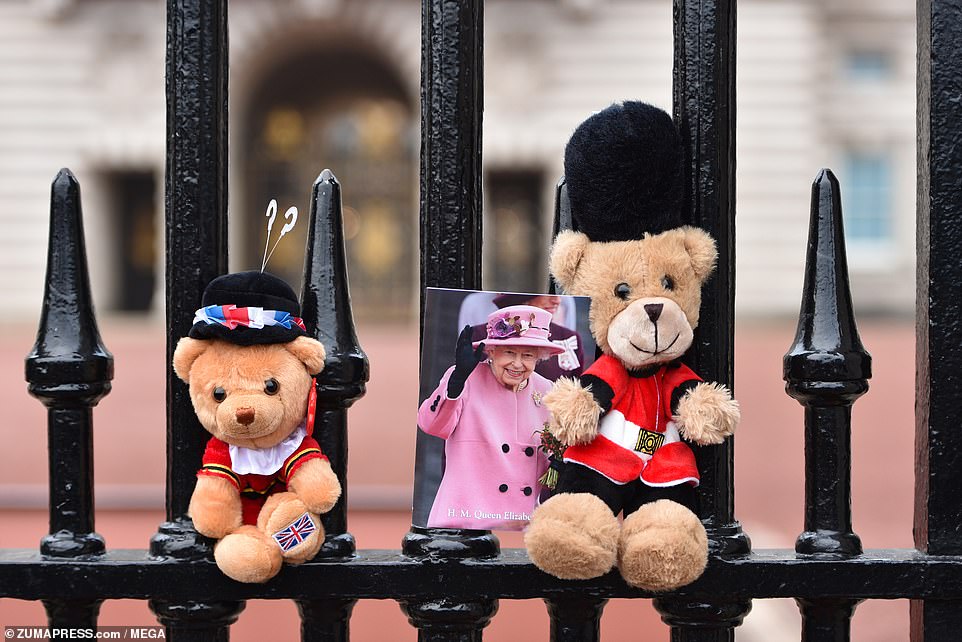 A postcard of the Queen wearing pink was also pasted to the gate of Buckigham Palace, next to a bear soft toy dressed like a Tower of London Beefeater, and a Royal Guard 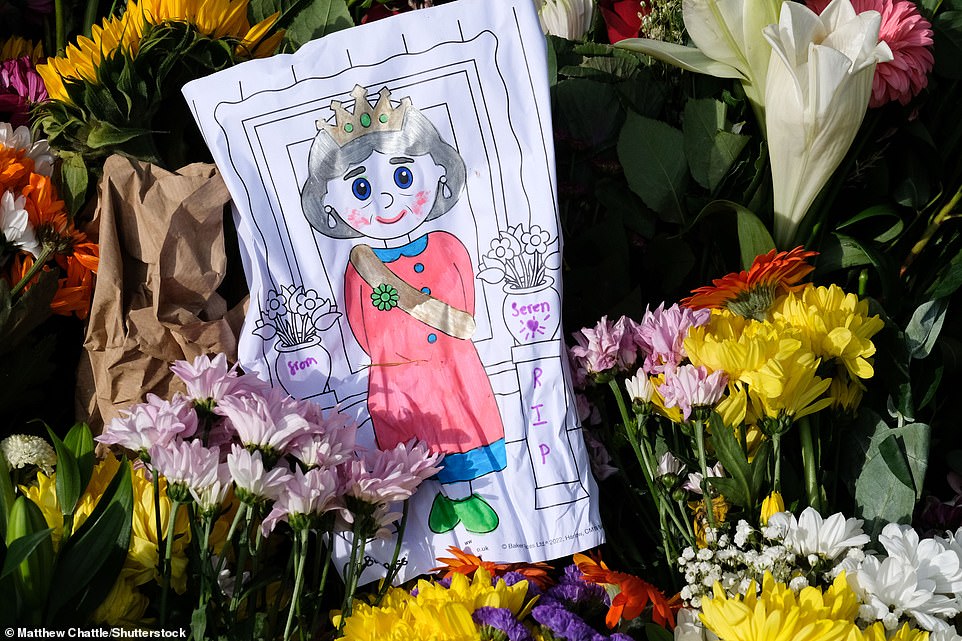 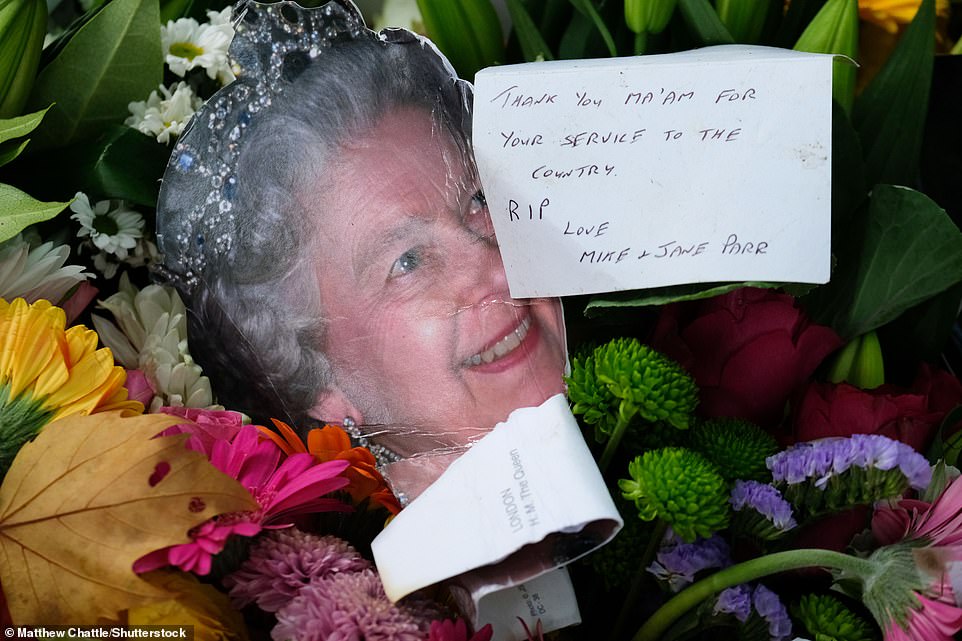 Some fans in Green Park decided to leave a cut out of the Monarch’s face, with a note thanking her for her service to the country