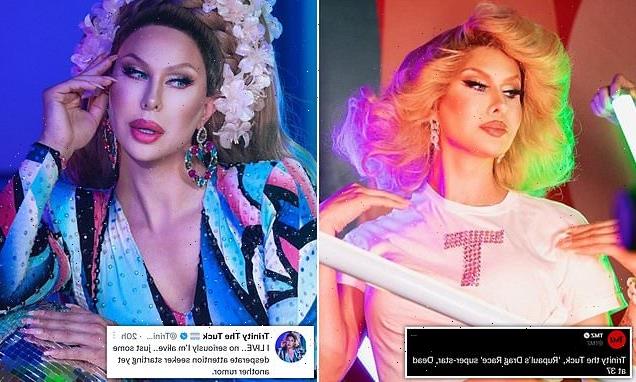 Fans were in shock when a Twitter account shared a realistic-looking news announcement from gossip website TMZ, saying the Alabama-born star, 37, had been killed in a boating accident.

Rumors started to spread when an account with the handle @livtasticz) said: ‘Rest in peace, Trinity the Tuck. It really was a shame what boating accidents can do, you will be missed.’

Below was an image of a fake TMZ headline that said ‘Trinity the Tuck, RuPaul’s Drag Race super-star, dead at 37’.

Trinity the Tuck, who was a finalist in the ninth series of the popular show and the winner of Drag Race All Stars season four, has branded the fake post the work of a ‘desperate attention seeker’ and joked that she’d never drown due to all the plastic in her body. 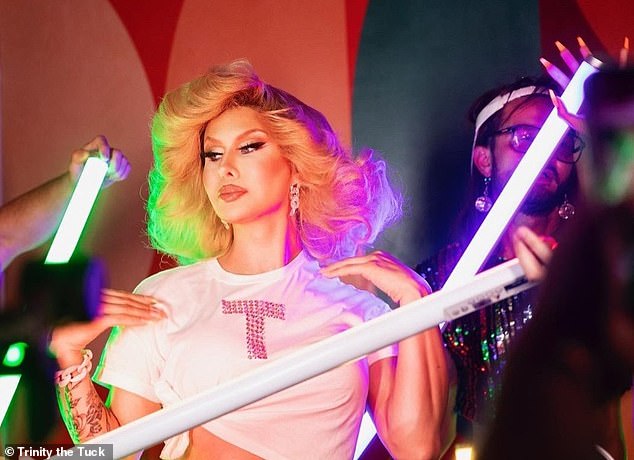 Trinity the Tuck Taylor, had to confirm to devastated fans that she was in fact alive and well after a hoax claim she had died in a boating accident

The RuPaul’s Drag Race star, from Alabama, confirmed she was alive via tweet, which was met with relief from fans . She called the fake post the work of a ‘desperate attention seeker’ 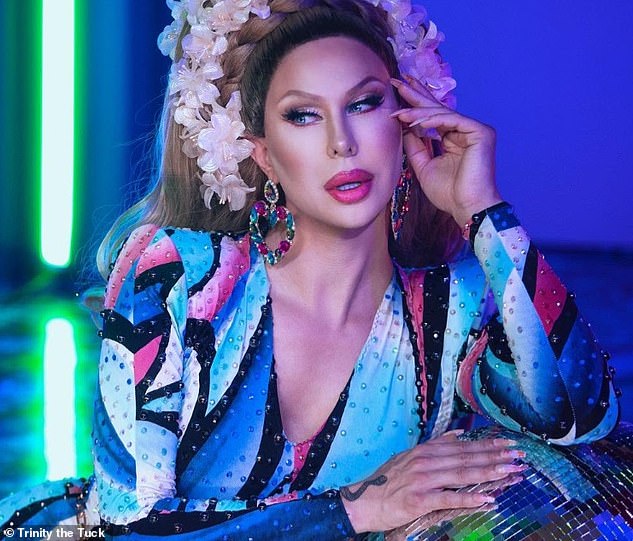 The star, who has her own vodka called Serv, has also released an album this week with fellow drag race contestant Monet X Change called Come Get It

After the fake announcement was made, Trinity had to confirm she was in fact alive in a tweet that said ‘I LIVE… no seriously I’m alive…just some desperate attention seeker starting yet another rumor.’

Fans exhaled with relief after seeing Trinity, who is also known as Ryan Taylor, was indeed live and well but many expressed sadness and anger, after falling for the fake news.

One said ‘This s*** not even funny, I saw it and started crying’

Another said ‘I read that in pure despair. Thank you for being alive and making me laugh about it.’ 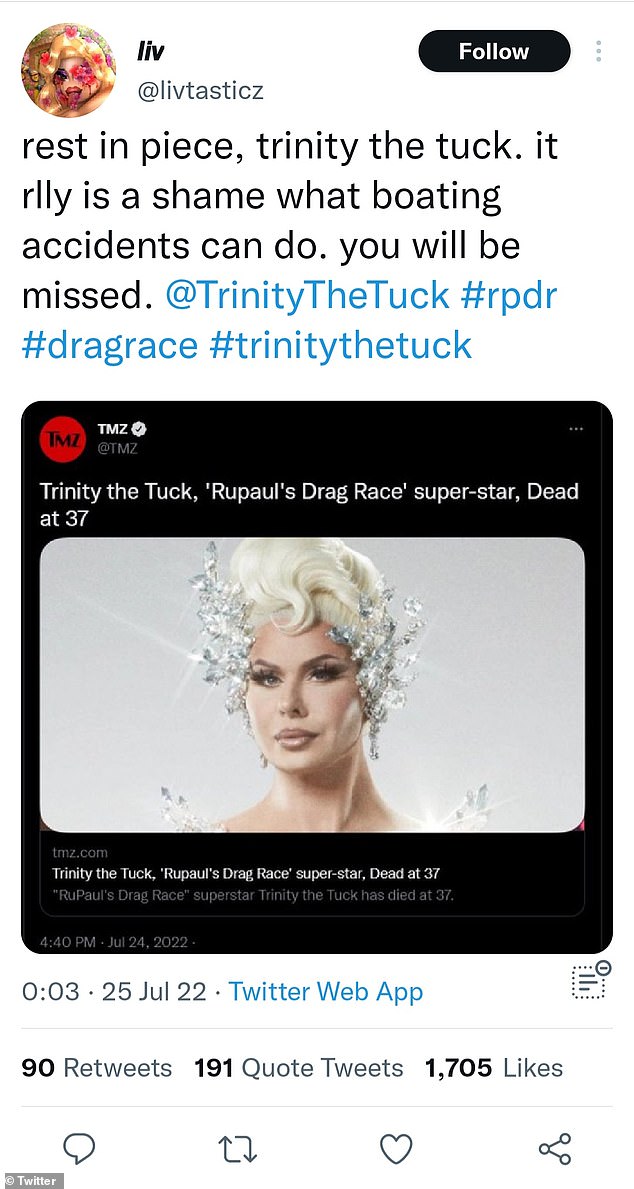 The Twitter user, called ‘Liz’ made a realistic looking TMZ link and appeared to be sad for Trinity, fans however, weren’t impressed

A Twitter user said they ‘almost fainted’ thinking that the news was true’.

Luckily, the popular star injected her famous sass into the situation, causing some laughs in the process.

Trinity replied to the original post saying ‘as if I would die in a boating accident, I’m half plastic – I would never drown.’

Someone compared the tweeter to US model and host Tyra banks, who some say RuPaul has based his current look on.

Trinity replied to this, saying: ‘Oh baby, the person who started this could never be compared to Tyra. They are a generic, basic pedestrian who has no life.’ 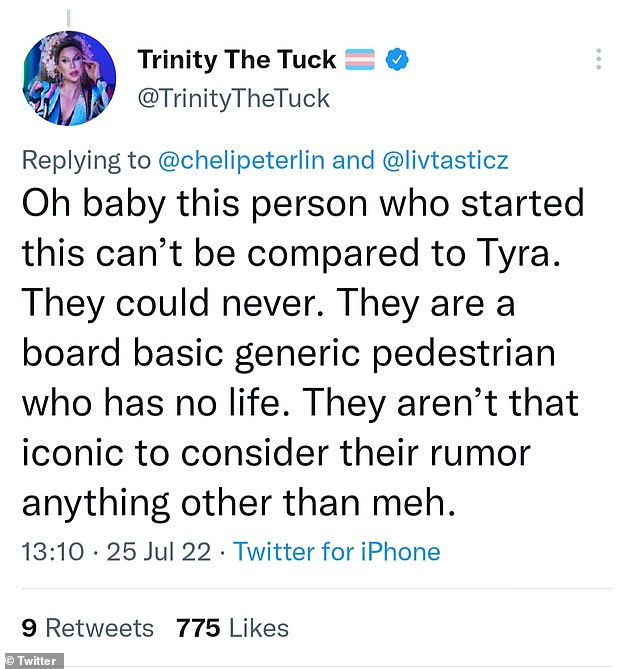 ‘Their rumor is nothing more than meh,’ says Trinity who has shaken off the fake news with her trademark sass 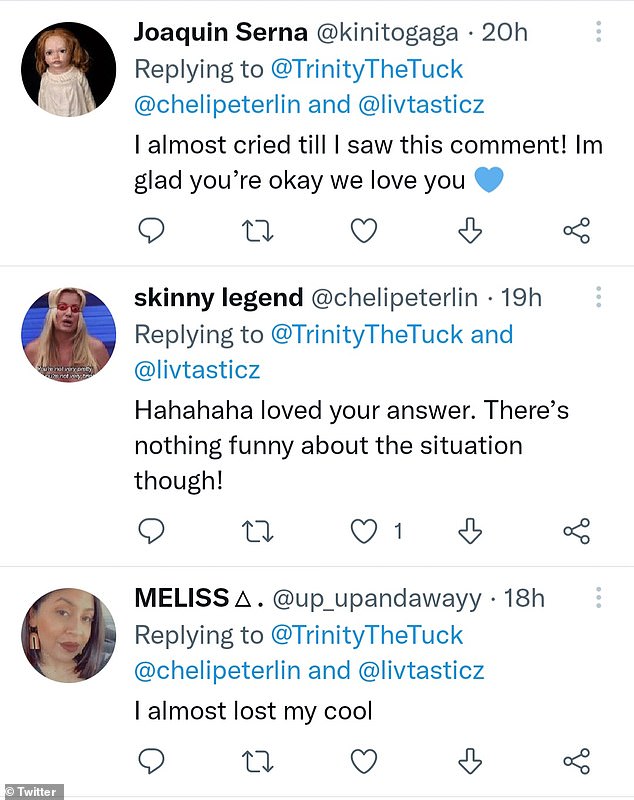 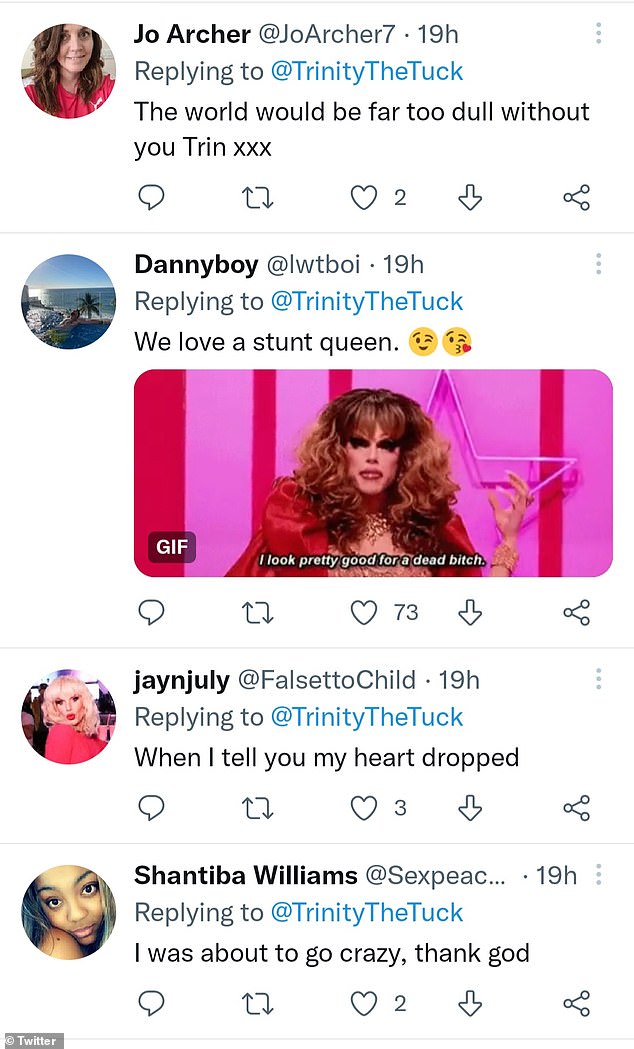 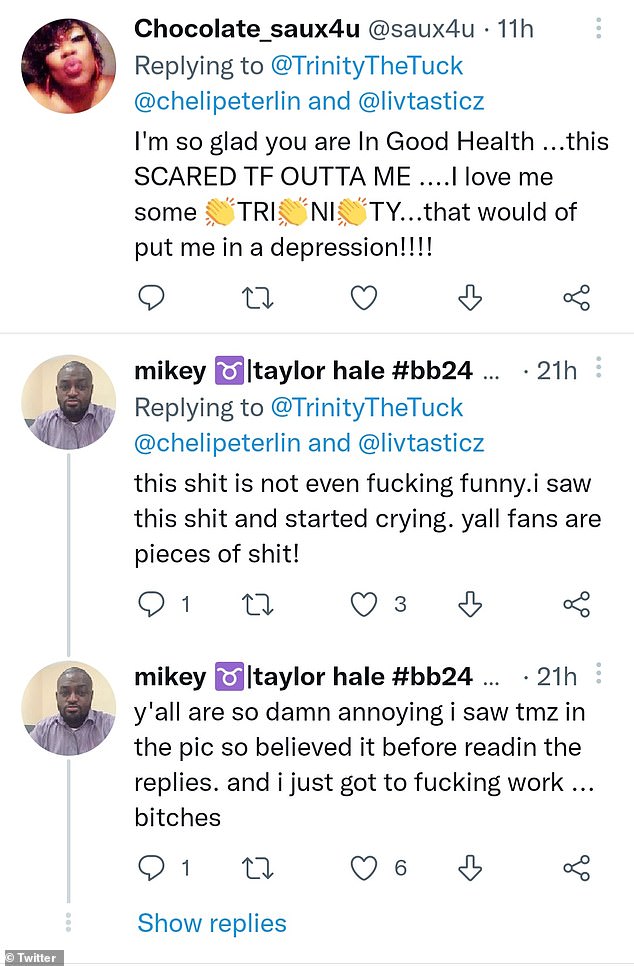 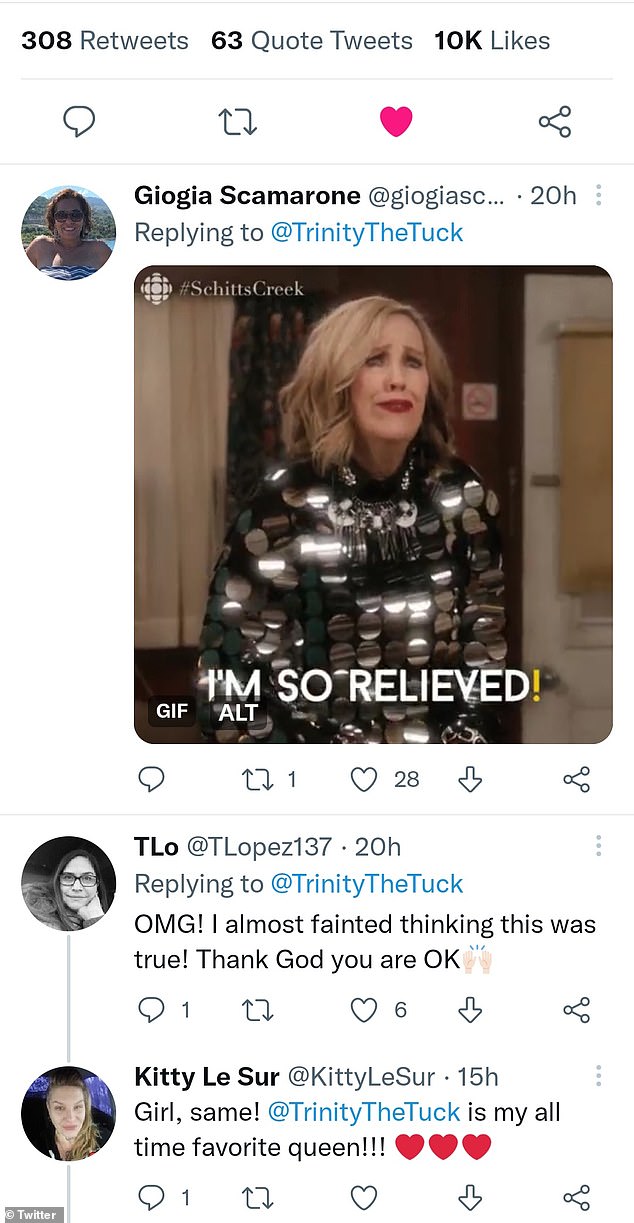 Fans shared their relief and also annoyance at the hoax, and some even said they were ‘crying’ at the news

The comment amassed 13.9K likes and hundreds of retweets.

Trinity the Tuck Taylor was known for her fabulous ‘tucking skills’ on season nine of RuPaul’s Drag Race, hence the moniker that’s made her famous.

Sasha Velour was the winner of the season, but Trinity had her chance again, when she scooped the winning crown in AllStars Season Four.

Season nine proved to be an especially memorable year for the show, which included guest judges such as Lady Gaga The B-52s and Andie McDowall. It was also the first season to air on US channel VH1.

The grand finale of season nine featured the final four queens in a lipsync showdown with one another, which came down to contestants Peppermint and Sasha Velour lipsyncing Whitney Houston’s ‘It’s Not Right, But It’s Okay.’

Despite not being an immediate winner, the RuPaul’s Drag Race favorite star has kept on rising since her stint on the show.

She now has her own vodka called Serv, and has just released an album called Come Get It that features fellow drag race contestant Monet X Change. 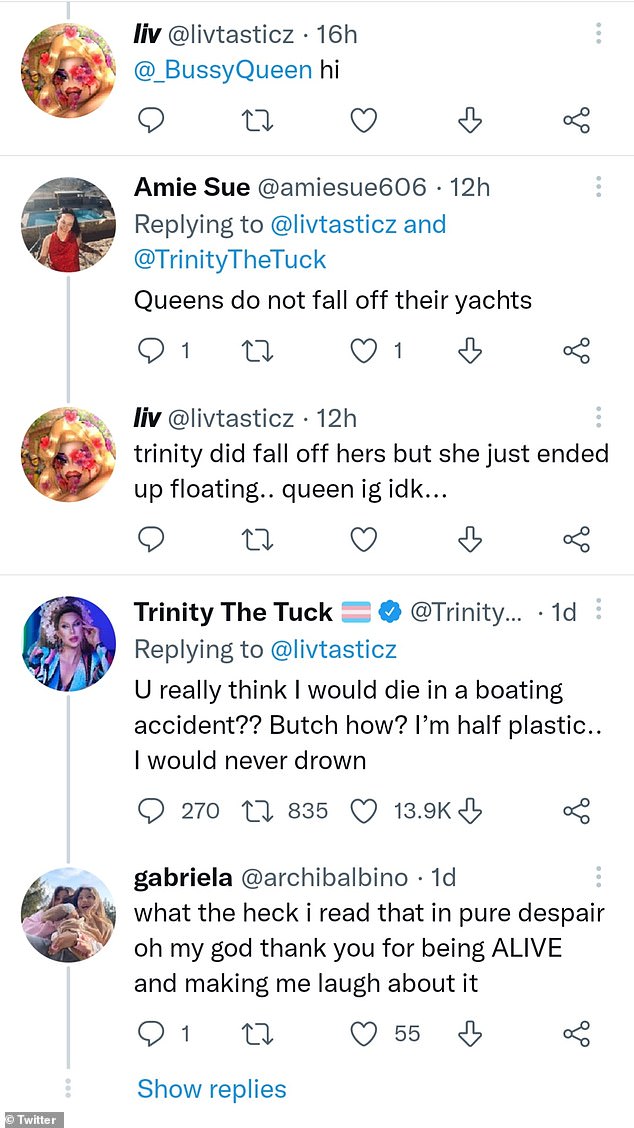 Queens do not fall of boats: Trinity quipped ‘You really think I would die in a boating accident? I’m half plastic!’ 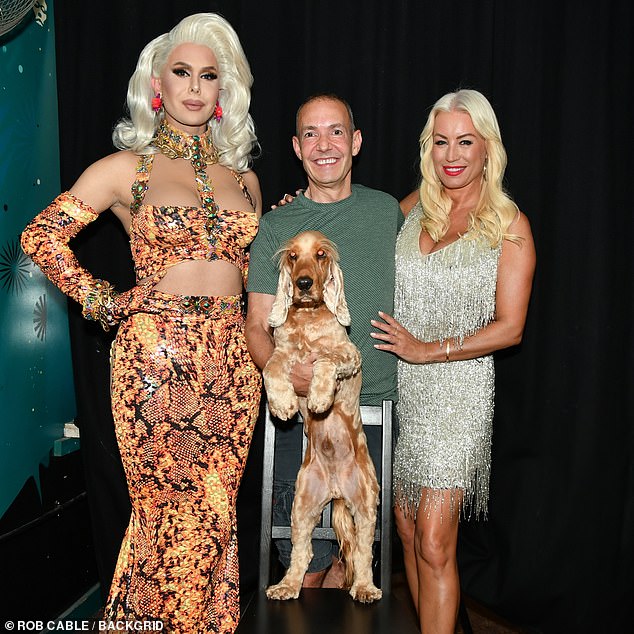 Trinity pictured last month in London. Denise Van Outen launches her new single at G-A-Y Heaven to a sold out venue. Denise posed backstage for photos before taking to stage with her dancers and after the performance joined Ru Pauls Trinity The Tuck backstage with G-A-Y owner Jeremy Joseph