A savvy shopper who has slashed her weekly food bill to half the national average revealed batch cooking two weeks’ worth of dinners at a time costs her around a fiver for the lot.

Always thrifty, Liane Wells, 32, became a cut-price connoisseur when she and her husband Ashley, 34, who is an engineer, moved to a house near a retail park in Biggleswade, Bedfordshire, four years ago – with a large supermarket on their doorstep.

The retail worker began snapping up the yellow sticker stock, reduced for quick sale every evening and soon the couple were living solely on cut-price produce.

However, Liane admits she has gone back to purchasing the odd non-reduced item since she started batch cooking a few months ago. 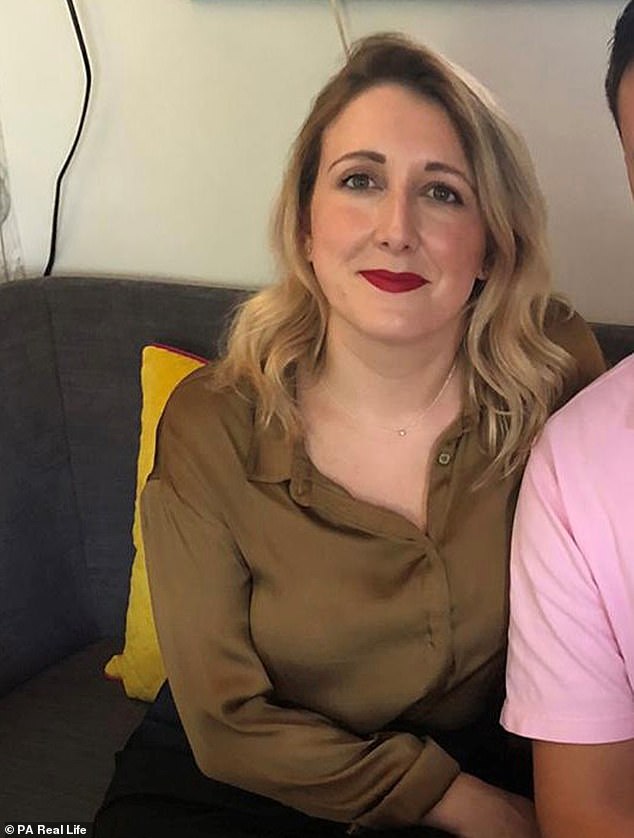 Liane Wells, 32, (pictured) who lives in Biggleswade, Bedfordshire, with her husband Ashley, 34, cuts the cost of spending on food with bulk cooking and yellow sticker shopping 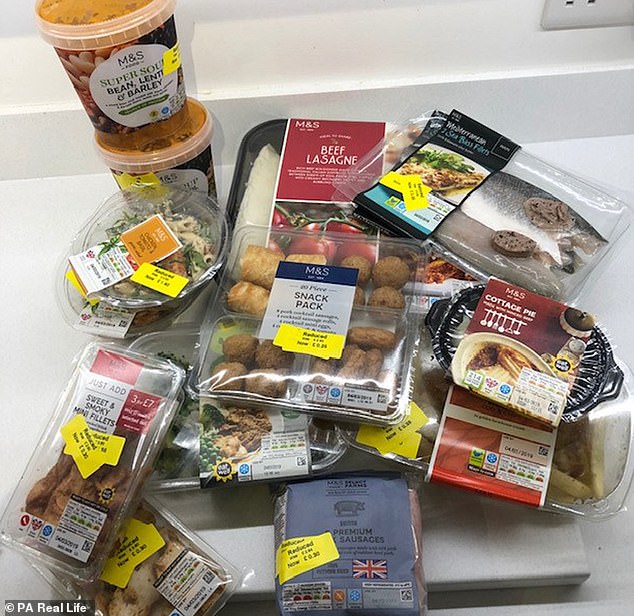 Liane began budget shopping during her teens by purchasing from charity shops. Pictured: A haul that only cost Liane £7.50 instead of £48.44 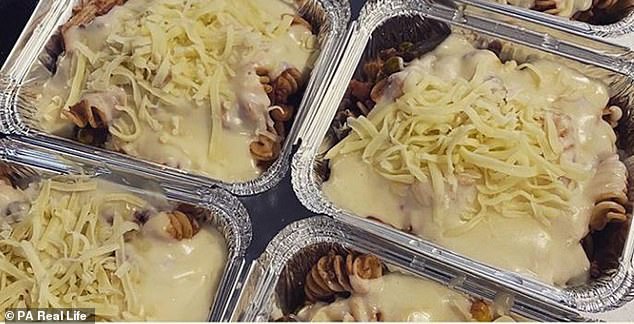 Liane revealed she creates up to 14 portions of delicious food or seven dinners for two at a time at less than a fiver for the lot.

She said: ‘I used to live off yellow sticker cooking and would pay absolute peanuts for things.

‘My freezer was full of chicken I’d picked up for 50p and lunch would be reduced sandwiches I’d got for just 20p.

In her teens, Liane discovered her money saving skills, when she started wearing charity shop finds.

Then, around four years ago, her bargain hunting skills spread from her wardrobe to her kitchen when she moved a stone’s throw from a newly-opened M&S supermarket and discovered yellow sticker food.

She said: ‘I soon learnt that if I went into the shop at around 5:30pm, staff were just starting to put out the reduced items.

‘I was amazed by how much was on offer. I started timing my shops especially.

‘While it meant I couldn’t plan ahead too much, as dinner would depend on what was on offer, I found it fun to challenge myself by thinking outside the box when deciding on a recipe.’

Liane said she found an entire community of fellow bargain-hunters online, who share tips and hints about the latest deals.

She continued: ‘I learnt so much through other people. I’m not the chattiest person online, but everybody was lovely and friendly.

‘I found out that supermarkets reduce their stock at different times. Some do it first thing, while others leave it to the end of the day when they have more of an idea of what will and won’t sell.

‘It’s a bit of a fine art and took a fair bit of hanging around different shops to see what was going on – supermarket stalking, as I called it – but I soon worked it all out.’ 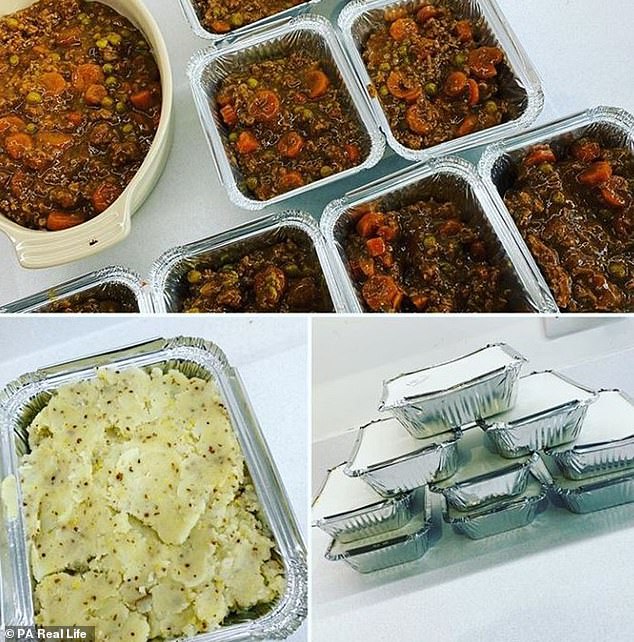 The savvy shopper can make 10 portions of cottage pie for just over £7, after snapping up reduced mince 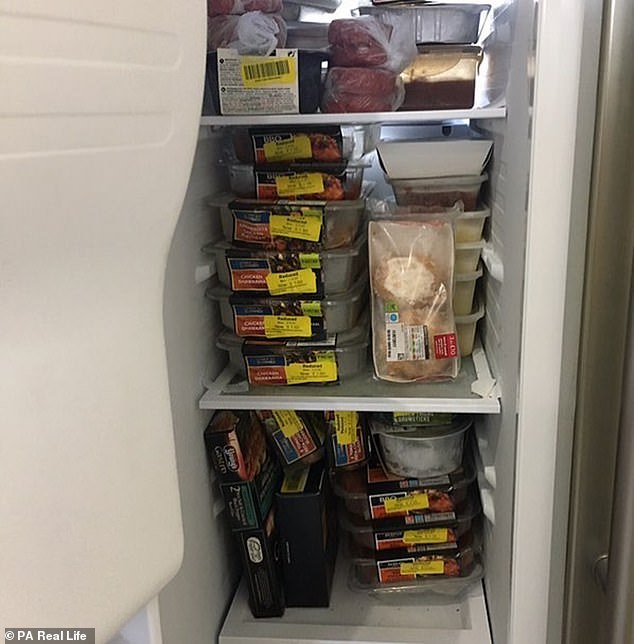 Liane said yellow sticker shopping requires ‘stalking’ supermarkets to find out when they usually reduce the price of their foods. Pictured: Liane’s freezer 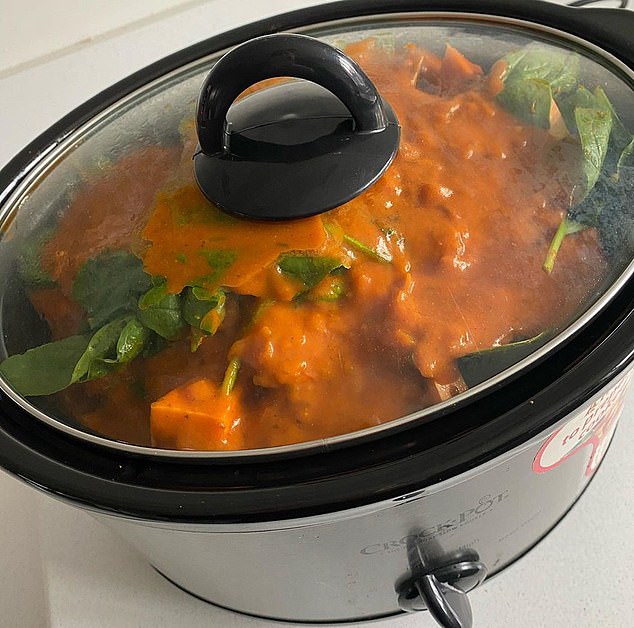 According to eagle-eyed shoppers on MoneySaving Expert forums, most Asda stores put out their final reductions at 9pm, while Aldi and Co-op do so at 8pm and Sainsbury’s at 7pm.

Lidl, Morrisons and Tesco start much earlier, slashing prices from the morning onwards – although the larger discounts materialise later on.

‘Of course, it all depends on the closing time of your local store and what their managers choose to do,’ explained Liane.

‘That’s why it’s good to do a bit of research, so you aren’t wasting a trip to the supermarket.’ 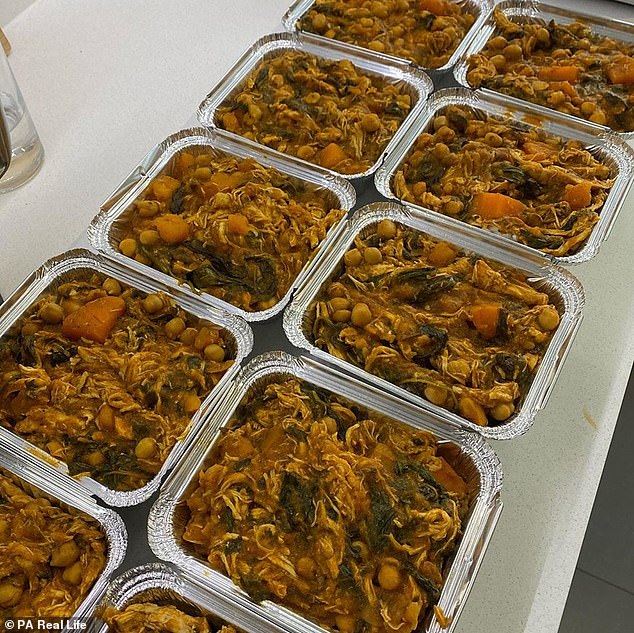 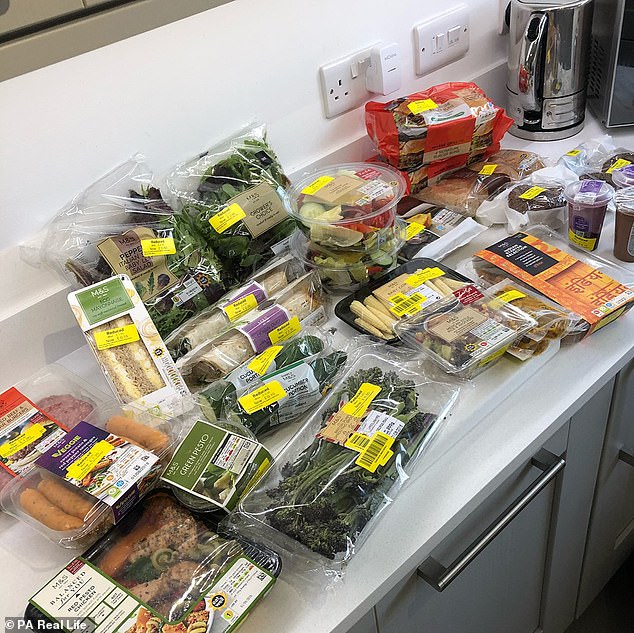 Liane said her best buys have included 1kg of mince for £3.50 and a family-sized lasagne for just 60p. Pictured: A yellow sticker haul

Since changing jobs to a role with longer hours this summer, Liane has relied less on yellow sticker bargains and more on batch cooking to keep costs down.

Timing her shops carefully, she still picks up reduced stock – only paying full price when she absolutely must – then rustles up a recipe to see her through the next fortnight. 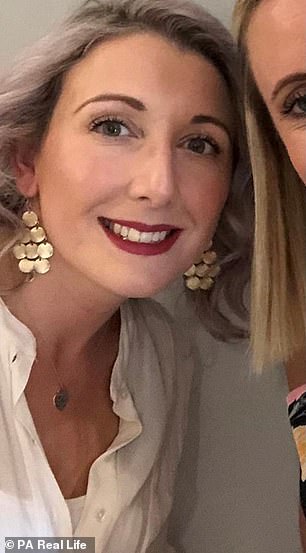 While some recipes cost her £6 to £7, she can make up to 14 portions of others for less than a fiver.

Some of her greatest triumphs include picking up 1kg of mince for £3.50 and a family-sized lasagne for just 60p.

A fringe benefit of her thrifty shopping habits has been shrinking her waistline alongside her food bills.

She said: ‘Like many of us, I did put on a bit of weight in lockdown, being stuck at home.

‘I’m the kind of person that if I shop every day and make a new recipe each night, I’ll likely overload my portion size without even meaning to. But batch cooking means everything is measured out.

‘I’ll use meat that I’ve picked up cheaply and frozen and then bulk it out with whatever vegetables I can find.

‘So much of it is given away for next to nothing purely because of its sell-by date, and while I wouldn’t gamble with something that could give me food poisoning, like dairy, you can get a bit more life out of most fruit and veg.

‘I’ll just cut away the bits that are a little worse for wear and use everything else. 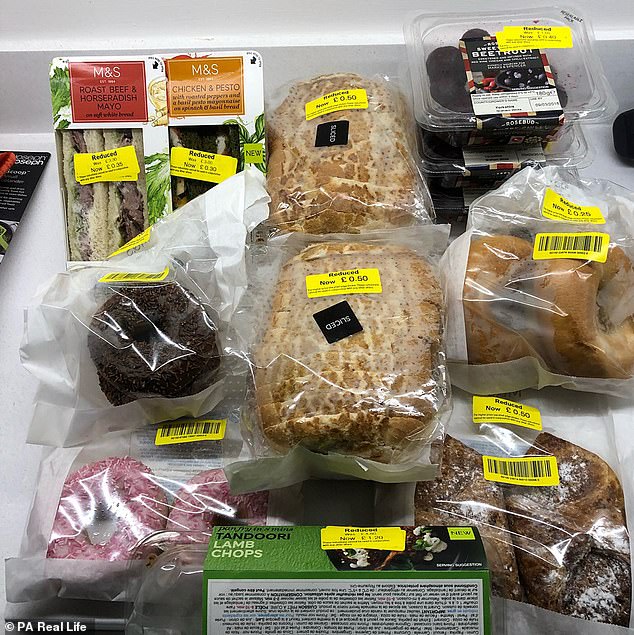 Liane said foods are often reduced because of their sell-by date, but you can get more from most fruit and vegetables. Pictured: A yellow sticker haul 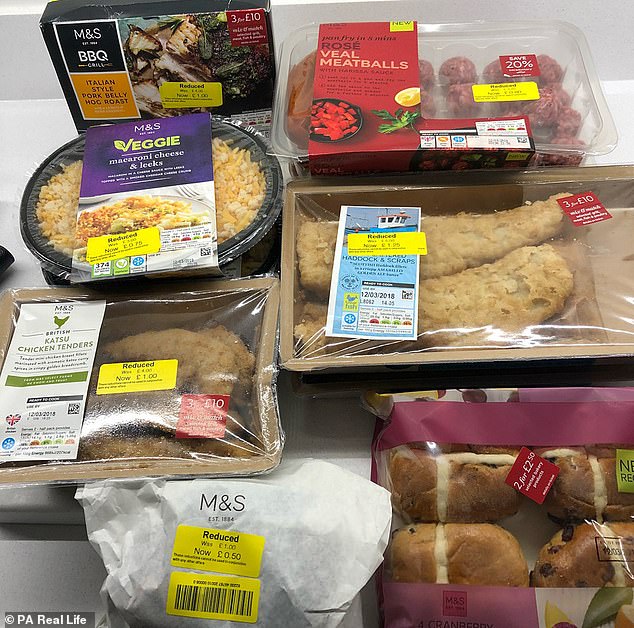 Liane said she takes most of her yellow sticker shopping out of the packaging and relies on her senses to judge if they’re safe to eat. Pictured: A yellow sticker haul

‘I take most of my fresh produce out of the packaging, so instead of relying on sell by dates, I use my senses, asking myself if it looks and smells right.’

Although her precise weekly food bill depends on what bargains she has bagged, it is usually around £25 to £30 – less than half the UK average which, according to recent figures from the Office of National Statistics, is £61.90 for a household of 2.4 people, without alcohol or restaurant bills.

‘Sometimes we’ll spend more if we’re treating ourselves. I work to quite a strict budget,’ she said.

‘I know some people get their shops cheaper, but Ashley and I are foodies.’ 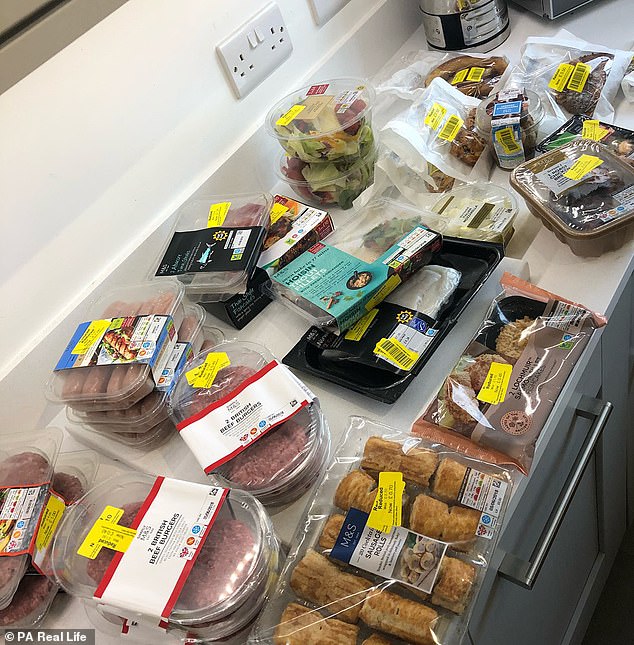 Liane said the amount of produce thrown away by supermarkets each day is sad and it should be given to those in need. Pictured: A yellow sticker haul

Now Liane wants to encourage more people to follow in her thrifty footsteps, which she hopes will, in turn, make them more mindful of food waste.

She said: ‘The amount of perfectly good produce that’s thrown away every single day is really sad.

‘I wish supermarkets could at least give it away to homeless people or those struggling, so it doesn’t just end up in the bin.

‘There’s a whole community of us online who love bargain cooking and are more than willing to share hints and tips about where to find the latest deal.

‘So, to anyone wanting to get involved, I’d say go for it.’