In mid-May, a small sticker appeared on a Labor senator's office door in Parliament House. To an untrained eye it was innocuous – four wolf's claw marks on a clear background. But it was a symbol of what was becoming parliament's most talked-about exclusive society.

The logo was confirmation that Victorian senator Raff Ciccone had been inducted into the "Wolverines", a bipartisan group established to speak up against China's growing assertiveness. The name Wolverines is a reference to the 1984 movie Red Dawn, starring Patrick Swayze and Charlie Sheen as high school football stars who thwart a Soviet invasion of the United States. 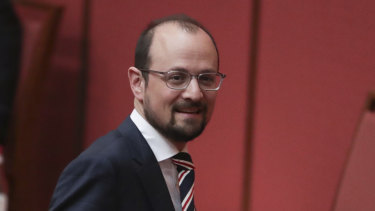 Senator Raff Ciccone was the second opposition MP to join the ‘Wolverines’.Credit:Alex Ellinghausen

Ciccone was the second opposition MP to join the informal group, which counts colleague Kimberley Kitching as a founding member.

Days after the sticker went up, Labor's deputy senate leader Kristina Keneally called Ciccone into her office. She told him he should be mindful of what other colleagues would think of him for having the sticker on his door and the perception that would create. Ciccone was left with the impression that it was a directive from Keneally to take it down. Months later, the sticker remains in place.

The encounter underscored the bitter divisions within Labor over China.

The Morrison government has its own issues on this front. There have been clumsy and dangerous interventions from Coalition MPs during the COVID-19 crisis which have angered colleagues – from Nationals MP George Christensen’s “China inquiry” to Victorian Liberal senator Sarah Henderson's calls to halt all virus research by foreign scientists. 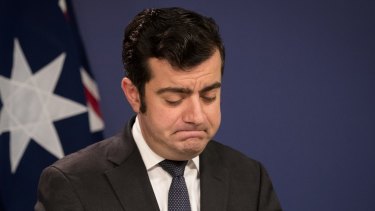 Some senior figures in the NSW Right claim that if not for Dastyari, Labor would not have been any more sullied by CCP-linked cash than the Liberals. After all, Huang gave more money to the Liberal Party.

But other figures within NSW Labor say Dastyari was symbolic of the immaturity and naivete over CCP influence within their branch.

"We are still shell-shocked," one senior figure said. "We don't how to react and we don't know how to deal with it."

The MPs who unsettle their colleagues most tend to be from the NSW Right or Western Australia. While a number of senior figures within the NSW Right have been trying to drag the party out of this era, there is still deep unease at the influence of Bob Carr. The former Labor premier and foreign minister has lauded the "great leadership" of Chinese President Xi Jinping and become one of the biggest critics of the government's handling of the China relationship. 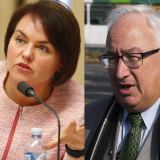 Kimberley Kitching and former MP Michael Danby have been among Labor figures pushing for a tougher line on China.Credit:

A number of MPs from the Victorian Right – including Kitching, Anthony Byrne and Peter Khalil as well as former MP Michael Danby – have pushed the party to adopt a stronger line on Beijing. While Labor's deputy leader and defence spokesman Richard Marles is regarded by most colleagues as fundamentally sound on national security, a speech in Beijing last year where he called for greater defence co-operation between Australia and China caused some unease.

Danby says Labor needs to "resume its traditional internationalist view of human rights" and be tougher than the Liberals on issues such as the crushing of dissent in Hong Kong and China's mass internment camps in Xinjiang.

"And it's not good enough to say nothing about it. We must speak up. I challenge all my former Labor colleagues to wake up and speak up about what's happening – this is the worst concentration camp system established since the Second World War," he says.

"Labor cannot remain silent. I know [foreign affairs spokeswoman] Penny Wong has said a few things here and there, but all of them should get up on their hind legs and speak up."

Along with ongoing problems in the NSW Right, Danby says there is a "creepy West Australian mentality which only looks at the iron ore price and kowtows to Beijing".

When Marles addressed the National Press Club in August, he said that Australians would only hear "one voice" from his party in government on the question of China.

Criticising the Morrison government for letting “fringe dwellers” on the backbench dictate China policy, he accused the Coalition of mismanaging ties with Australia's largest trading partner by failing to speak with a single message.

But this year we've been hearing many voices from within the ALP – and they are increasingly crowding out those of Marles and Wong. While the two shadow ministers try to run a nuanced criticism of the Morrison government when they believe it has gratuitously angered Beijing, others in Labor attack the Coalition every time China strikes at Australia. 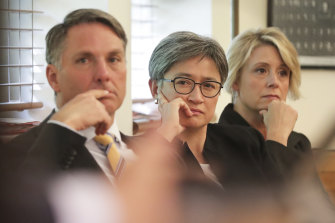 "We bash the government whenever China does something mean to us, and it seems we never consider whether it might be China's fault. It's rewarding the bully," one Labor MP said.

"Now, there may be occasions where you can make a nuanced argument that the government has mismanaged an issue, but our modus operandi is to bash them every time."

Asked about the divisions this week, former Labor prime minister Kevin Rudd said Marles and Wong were "no-nonsense individuals in terms of national security policy and for the long term I really have no reason to doubt they will remain robust".

Over the past seven years Labor has, at certain times, been stronger than the government on pushing back against China: it opposed a controversial extradition treaty with Beijing in 2017, while Marles has often been more vocal about the prospect of conducting freedom of navigation operations in the South China Sea. Labor also supported the government's foreign interference laws in 2018, and its contributions arguably improved the Bill.

Wong, who regards herself as a foreign policy realist, was publicly raising the strategic consequences and downsides of China's Belt and Road Initiative, and its growing assertiveness under Xi, as early as 2017.

She says the party has to take into account different views, but she has been aware of the "implications of a more powerful and assertive China" since the Copenhagen Climate Summit in 2009.

"The challenge of managing that relationship is better met with the discipline that respectful discussion enables. That's the approach our leadership has made," she says.

"It was my view that it would benefit not by domestic political escalation but by members of parliament being much better understanding of those shifts over time.

"Our approach to China has to be grounded in our underlying values, including our sovereignty – it's why I rejected the extradition treaty … but I also reject the McCarthyist tones in some of the debate."

Agriculture spokesman Joel Fitzgibbon, from the NSW Right, and trade spokeswoman Madeleine King, from the WA Right, have annoyed some colleagues in recent weeks by jumping on every chance to criticise the government over trade strikes from Beijing.

Fitzgibbon, for example, has repeatedly claimed that an independent international inquiry into COVID-19 was always going to happen so we shouldn't "unnecessarily offend the Chinese".

Another source of irritation is Victoria's left-wing senator Kim Carr, who last year lashed Australia's national security establishment for creating a "new Cold War" and said that opposition to research collaboration with China risks the nation's future prosperity. Some MPs, including those on the hawkish side, defended Carr, saying they were genuinely held beliefs and he was making valid criticism of researchers and academics being unfairly denigrated.

And then there's Victorian Premier Daniel Andrews, who has infuriated federal Labor MPs over his refusal to scrap his Belt and Road agreement with the Chinese government. Fending off criticism about a Chinese company building a fleet of trains for Victoria being linked to China's mass internment of Uighurs, Andrews said he did not "agree with everything that is done in every country".

Outside of parliament, the union movement is also at odds. Right-wing unions such as the Australian Workers' Union and the Shoppies have been pushing for the party to adopt a stronger line on Beijing, while left-wing union the CFMEU this week accused the Morrison government of "undiplomatic, reckless and sometimes bizarre" attacks on Beijing.

But lately, the most vitriolic anger appears to be directed at Kitching, who chairs parliament's Foreign Affairs, Defence and Trade References Committee.

Despite Kitching's comments largely being in line with those of others such as Byrne, Ciccone and Khalil, multiple MPs contacted this week offered criticisms of her unprompted, claiming she was the one creating division. Since her election, the presence of the close ally of former leader Bill Shorten has caused divisions. Criticism of her hawkish views was sometimes venomous, with some questioning her Labor values.

Some Labor MPs have even blamed Kitching for allowing Liberal senator Eric Abetz to ask three Chinese-Australians to denounce the Chinese Communist Party.

Many other MPs, particularly from the Right, defended the Victorian senator.

"She couldn't shut down debate. It was actually up to other MPs to raise a point of order," one MP from the Right said.

Asked for her view on the internal debate over China, Kitching says human rights "are not exclusive but rather universal".

"When I speak out in the Australian Parliament or other fora against authoritarianism, I do so with this in mind: any regime that puts itself above the wellbeing of its people, that oppresses minorities, that crushes the human spirit, these regimes should be opposed," she says.

While some Labor MPs have strong opinions on where to go with the China relationship, many appear blissfully ignorant.

National security experts regularly complain that not enough federal MPs have a background in the field. While parliament is filled with lawyers, union officials and small business owners, people with expertise in defence or diplomacy are harder to find.

For more than a year, Wong has been calling on the Morrison government to provide briefings on the China relationship to all federal MPs.

While individual MPs from the opposition have been able to secure briefings from government departments, allowing for the Department of Foreign Affairs and Trade and the Office of National Intelligence to brief all federal parliamentarians would undoubtedly result in a more nuanced and informed debate.

Whether the government wants to save Labor from itself is another question.

The most important news, analysis and insights delivered to your inbox at the start and end of each day. Sign up to The Sydney Morning Herald’s newsletter here and The Age’s newsletter here.