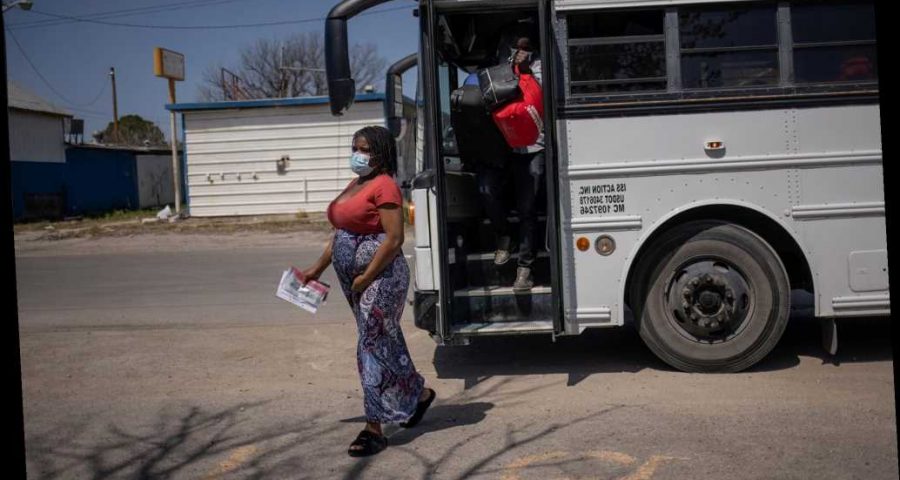 Twitter admits it made a mistake censoring border photos

VP Harris admits there is a ‘huge problem’ on southern border

Biden to meet with top immigration officials amid migrant surge

DEL RIO, Texas – Nehemie Montrose, a mother-to-be from Haiti, stood anxiously outside a respite center for migrants in Del Rio, Texas, waiting for the daily border patrol buses dropping off migrants who had recently crossed the US-Mexico border.

For five days Nehemie, 29, had waited and watched people get off the buses in single file. Again her husband, Josue Macon, was not among them. They had crossed the Rio Grande river that separates Texas from Mexico days earlier and been taken into custody by US border patrol agents. She had not seen him since.

Inside a border patrol station, the couple was separated and Josue was sent to a men’s outdoor holding area, Nehemie said. That was the last she saw of him before she was taken to the center in Del Rio, Texas, where she now waited for any word of his whereabouts.

“Every day I think my husband is coming,” Nehemie said as she sat outside the center on Sunday afternoon. “I wait so much and he doesn’t come.” She clasped her palms together. She had written Josue’s name on one of them with a pen and added a Spanish inscription: “I miss my love. I am suffering so much.”

Cases like Nehemie’s highlight the scramble on the ground as increasing number of migrants arrive at crowded border patrol facilities and US authorities have to make swift case-by-case calls about whom to release, whom to detain and whom to expel.

After US border patrol separated Nehemie and her husband in custody, Nehemie fell asleep for a few hours. When she woke she asked about her husband. She was told he was gone, she said.

In the Spanish she had picked up since leaving Haiti three years earlier, Nehemie said she begged officers for help. She told them she was pregnant, that the couple had planned to go to his family in the United States, whom she had never met. How could she go there without him?

She said her pleas for help went unanswered. Instead, she was put on a bus and taken to the Val Verde Border Humanitarian Coalition (VVBHC), an organization that has been helping released migrants in the border town of Del Rio and runs the respite center. She does not understand why she was released but her husband was not.

US Customs and Border Protection declined to comment on the specifics of Nehemie’s case. It said in a statement that migrants could be released pending an immigration hearing on a “case-by-case” basis, taking into consideration “legal requirements, COVID-19 protocols, changes in Mexican law, US holding capacity and the health situation of the individual.”

The Biden administration has hammered the message that the border is closed and that most arriving migrants, other than children traveling without legal guardians, will be expelled from the country under a Trump-era public health order put in place to limit the spread of the novel coronavirus.

But in practice, the government is releasing thousands of migrants, mostly families, in Del Rio, the Rio Grande Valley and elsewhere, in part due to a change in law in one Mexican state that limits which families the United States can return.

Tiffany Burrow, director of operations for the VVBHC, told Reuters she has seen 100 people released on average per day to the facility since the end of February, mostly Haitian families.

She said cases like Nehemie’s, where released migrants have no idea what has happened to family members they had been traveling with, were a daily occurrence.

On the same day Nehemie spoke to Reuters outside the center, a Venezuelan husband and his pregnant wife were holding vigil for his mother, who had not been released with them. They, too, hoped she would arrive on the bus. Like Josue, she did not.

All around Nehemie at the respite center, families were enjoying their first moments of freedom in the United States – children rode tricycles and kicked soccer balls while their parents tried to sort out their onward travel, asking volunteers for help as they booked tickets to their loved ones.

Nehemie could not bring herself to talk to anyone. Watching couples get off the bus together was particularly hard for her.

Her voice broke. “I feel awful when someone comes with their husband and I don’t have mine,” she said.

Nehemie had no money and no way to communicate with him. Josue carried all of the couple’s cash and their shared cellphone. The Del Rio center has no overnight capacity, so a pastor paid for her to say in a motel for a few nights. She called her husband’s phone repeatedly from the center, but the calls did not go through.

While the separation of adult family members in immigration is not new, advocates are calling on the Biden administration to fulfill its promise of a more humane immigration system by allowing families like Nehemie’s to stay together, or reunifying those that have been separated.

Guerline Jozef, executive director of the Haitian Bridge Alliance, an organization focused on helping Black immigrants, said under former President Donald Trump she saw cases where pregnant women were released but their partners were detained and deported.

This has left behind “a slew of single women and fatherless children whose fathers and partners cannot do anything to be reunited with their families,” she said.

By Sunday, Nehemie knew she had to leave the border. She had barely eaten for days. Her pregnancy had made her prone to vomiting and she could not keep the respite center’s sandwiches down. She planned to fly the next morning to Josue’s older brother in Florida who had bought her an airline ticket.

Marjorie Macon, Josue’s sister-in-law, had some news for her when she landed: Josue had called from an Immigration and Customs Enforcement (ICE) facility.

It wasn’t clear whether he was being held there prior to being deported.

ICE confirmed that Josue was in their custody in Mississippi but did not respond to questions about the case.