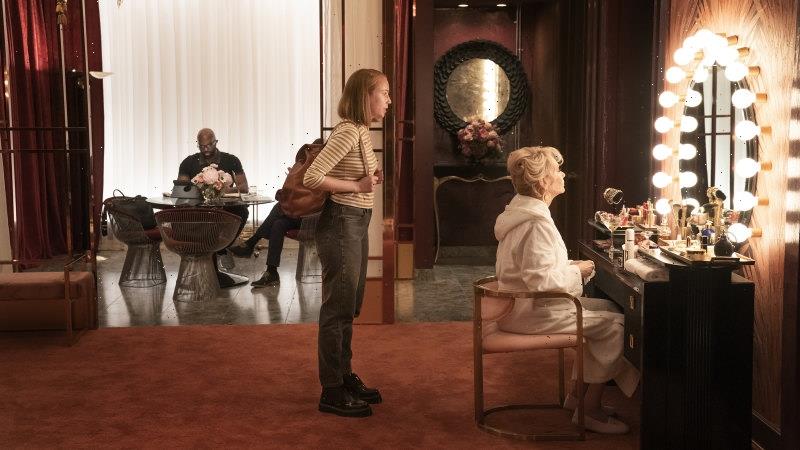 Eating and watching TV are among the most popular activities on the increasingly short list of Things We’re Allowed to Do in lockdown. Luckily, the two go hand-in-hand, and I’ll be damned if I’m not going to rewatch The Sopranos with a plate of gabagool.

However, with the current restrictions set to drag on, it’s impossible to spend every day gorging on long-form dramas (or cured meats, for that matter). Sometimes you want something snackable, a quick bite, 30 minutes of deliciousness. Treat this list as the palate cleanser we all need: 15 shows that are just enough without being too much. 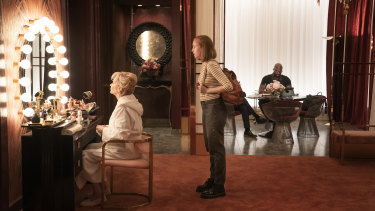 Hacks, Stan*, S1
Like a great stand-up set, Hacks is funny, thought-provoking and, most importantly, doesn’t overstay its welcome. The half-hour comedy sees Jean Smart play Deborah Vance, an ageing stand-up comic who must face a fate worse than bombing on stage: working with a Millennial.

This Way Up, Stan, S1
Given we’re all teetering on the edge, This Way Up feels especially timely. Following a ‘teeny weeny’ nervous breakdown, Áine (Aisling Bea) leaves rehab and re-enters the world, where she is forced to confront a raft of real-life horrors, including talking to strangers, finding a date and (sob!) going to work. It’s enough to keep you inside forever.

Starstruck, ABC iView, S1
Created, written by and starring Edinburgh Comedy Award-winning comedian Rose Matafeo, Starstruck is one of the standout comedies of the year. Matafeo shines as Jess, a Kiwi in London who discovers her one-night stand is a famous film star. Catch up now because HBO Max has already ordered a second helping.

Fleabag, Amazon Prime, S1-2
Named checked by Obama as his favourite TV show, Phoebe Waller Bridge’s Golden-Globe winning comedy Fleabag is one of few series that over-deliver on the hype. Blazing a trail for the rise of sadcoms, Fleabag walked so Starstruck and This Way Up could run.

Schitt’s Creek, Netflix, S1-6
After cleaning up at the Emmys and the Globes last year, Schitt’s Creek was widely celebrated as the show that saved 2020. Fast-forward to 2021, and we still need saving. Thankfully, the riches-to-rags tale of the Rose family remains the ideal distraction with oddly relevant dialogue, including this gem from Catherine O’Hara’s character, Moira Rose: “The world is falling apart, and I’m dying inside.” 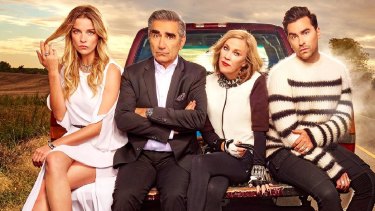 The Rose family of the popular Schitt’s Creek series. The sixth and final series has just aired in the US.Credit:Suppled

Ramy, Stan, S1-2
Production on the third season of Ramy has been halted due to the pandemic (the irony) but the first two seasons offer plenty of snackability. Writer, director and star Ramy Youssef does a stellar job carrying the show, about an Egyptian-American man on a journey to spiritual enlightenment.

Mr Inbetween, Binge and Foxtel, S1-3
The series ended recently but Mr Inbetween will find laughs long beyond its last episode. A cult comedy about a bogan hitman with a penchant for violence, it was created by Scott Ryan, a former cab driver.

The Chair, Netflix, S1
Six episodes of Sandra Oh sticking it to the (old) man make it easy to watch but The Chair is much more than another campus comedy. Expect endless literary references, commentary on cancel culture and a wonderfully self-aware David Duchovny cameo. 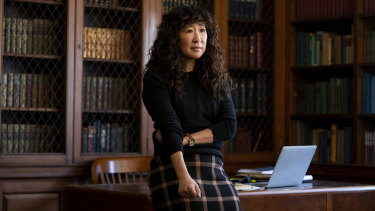 Sandra Oh is the head of the English Department at a minor Ivy League college in The Chair.Credit:Eliza Morse/Netflix

Everything’s Gonna Be Okay, Stan and ABC iview, S1-2
The title may feel ambitious but a little manifesting never hurt anyone. As a neurotic twenty-something forced to raise his teenage half-sisters after their father dies unexpectedly, Josh Thomas is doing what he does best: mining life’s awkward moments for laughs.

Ted Lasso, Apple TV, S1-2
Sentimental, kind, joyous: Ted Lasso is all the feelings we struggle to summon right now. The fish-out-of-water comedy starring Jason Sudeikis as a folksy American football coach transplanted to the English Premier League is guaranteed to stave off the indoor blues, one half-hour episode at a time. 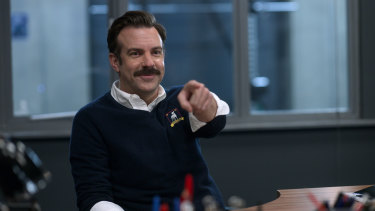 Never Have I Ever, Netflix, S1-2
Coming-of-age comedies are a dime a dozen but in the capable hands of Mindy Kaling, this one feels fresh and familiar all at once. Based on Kaling’s childhood, the series stars Maitreyi Ramakrishnan as Devi, a 15-year-old who is appalled and intrigued by her desire to fit in at school.

Girls 5Eva, Stan, S1
Girls5Eva is a welcome throwback to a simpler time: the 1990s. With Tina Fey serving as an executive producer, it hilariously skewers the era that gifted us girl groups and boy bands. A second season is already on the way.

*Stan is owned by Nine, the owner of this masthead.