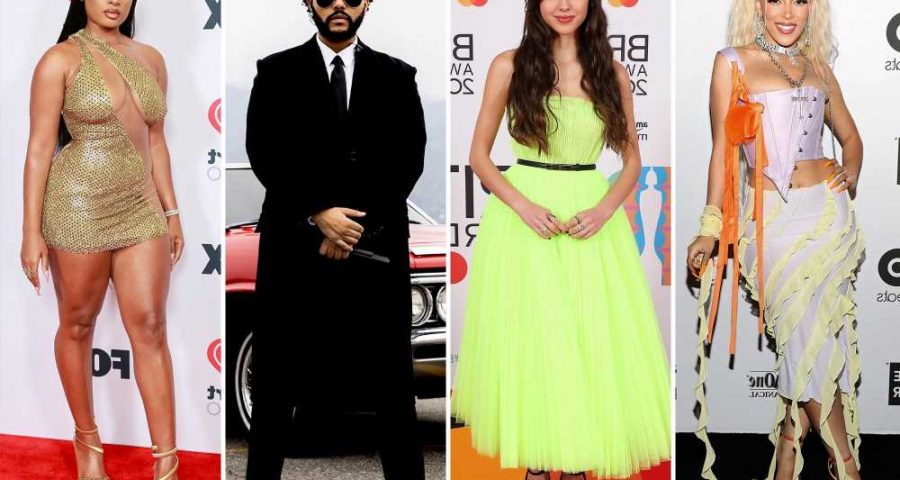 Elvis Costello on Olivia Rodrigo plagiarism claims: It’s OK, I do it too

With the Fourth of July weekend upon us, summer 2021 is sizzling up with some hot new songs to provide the soundtrack for beach season. And let’s face it, we have a lot to shake off — physically and mentally — after COVID upended last year. So get your playlists ready as we pick the Top 10 tunes to rock your summer — from BTS and MTS (Megan Thee Stallion) to Billie Eilish and Billy Porter.

“It’s a vibe, feelin’ right,” sings Tinashe on this blissed-out bop with rapper Buddy. With its feel-good mood and trippy, skittery beats, you may not be able to help yourself from skipping all the way to California — at least in your mind — when “Pasadena” comes on.

The “Hamilton” actor has already made waves this summer with both his starring role in “In the Heights” and his dramatic turn on HBO’s “In Treatment.” But although his debut album, 2019’s “The Good & the Bad,” was sorely overlooked, it’s clear that Ramos is a pop superstar waiting to happen. On “Lose My Mind” — from his second LP, “Love and Lies,” released last week — the Brooklyn native captures shades of Bruno Mars and The Weeknd while mixing in his own sexy-cool swag.

8. Billy Porter, “Caught in the Middle”

The “Pose” star will have you living and working the dance floor with this euphoric cover of the 1994 Juliet Roberts club classic “Caught in the Middle.” From “Red Hot + Free” — the latest HIV/AIDS benefit compilation from the Red Hot organization, which is out on Friday — it takes you back to the ’90s deep-house heyday now that we can all twirl together again.

Last summer, SAINt JHN’s career came all the way up with “Roses,” which hit the Top 5 of the Billboard Hot 100, and now this Brooklyn-born artist continues to blossom with this summer-lover joint from the upcoming “Space Jam: A New Legacy” soundtrack, out July 9. SZA — who has another hot summer collaboration, “Kiss Me More,” with Doja Cat — is clearly on a roll as a featured artist, but we’re still waiting for her to drop that “Ctrl” follow-up already.

With the spooky goth-pop groove of her No. 1 smash “Bad Guy,” Eilish left her neon-green mark on the summer of 2019. And she’s set to make another big splash this season with her much-anticipated sophomore album, “Happier Than Ever,” due July 30. After “My Future,” “Therefore I Am” and “Your Power,” “Lost Cause” is the latest preview of the LP, and it casts a jazzy, sultry darkness on summer’s sunny days.

Having just been nominated for three Grammys in March, including Best New Artist, Doja Cat clearly has some clout on her third album, “Planet Her,” released last week. The “Say So” singer is joined by some A-list guests, including Ariana Grande, SZA and The Weeknd, who bring a moody sensuality to their summer-breezy bop “You Right.”

It’s officially not summer until Megan unleashes a juicy — or make that, thirsty — jam. First there was “Hot Girl Summer” with Nicki Minaj and Ty Dolla $ign in 2019. And then of course there was “WAP” with Cardi B in 2020. Now she’s embracing her thotness over a booming, bump-and-grind beat made for shaking her booty in your face.

After smartly going away for a while, Sheeran returns with a new single that throws it back to the kind of ’80s synth-pop territory that The Weeknd mined for “After Hours” hits such as “Blinding Lights” and “Save Your Tears.” It’s a long way from the folky terrain of “The A Team” and “Thinking Out Loud.” But “Bad Habits” proves that Sheeran still has a knack for making ridiculously catchy pop that you’ll be hearing pretty much everywhere this summer.

The creamy-voiced crooners of BTS have already scored a bona-fide summer smash with “Butter,” which is currently at No. 1 for its fifth week on the Billboard Hot 100. The latest single from the South Korean sensations — who last summer topped the charts with their first English-only single, “Dynamite” —  goes down as smoothly as a frozen mocktail. “Smooth like butter/Like a criminal undercover/Gon’ pop like trouble/Breakin’ into your heart like that,” they sing. And the guilty pleasures of “Butter” will surely melt hearts at many a pool, backyard and rooftop hang near you this summer.

After already landing hits with “Drivers License” and then “Deja Vu,” both off her debut album “Sour,” Rodrigo keeps her hot streak going with her third single to hit the Top 3 of the Billboard Hot 100 in 2021. But whereas “Drivers License” and “Deja Vu” found the “High School Musical: The Musical: The Series” star in her breakup feelings, “Good 4 U” sees the 18-year-old divette cutting loose in a punk-pop rave-up with both Avril-like attitude and Billie-esque bravery. Good for her.