It took a special sort of pluckiness to attempt a surf in Victoria in the winters of the late 1960s.

With water temperatures hovering around 12 degrees and wetsuits yet to make their mark, local surfers took to wearing football jumpers in a bid to prevent hypothermia while capitalising on Bells Beach’s bitter offshore winds and notorious winter swell. 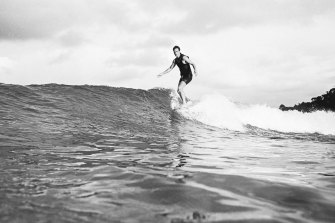 Those gallant few would race up the beach to a campfire to try thaw out for a few minutes before paddling back out for their next set.

And it was around one of these very campfires that Rip Curl founders Doug “Claw” Warbrick and Brian “Sing Ding” Singer reportedly met and set in motion a brand and lifestyle philosophy that arguably became Australia’s biggest cultural export of the decade and the inspiration behind ABC’s new series Barons.

“As Brian tells it, Claw was wearing a tartan dressing gown heating a tin of baked beans in the fire,” says Tim Baker, author of The Rip Curl Story.

“Claw saw himself as a bit of a bohemian beachcomber character and Brian was a much more pragmatic, hard-nosed, business kind of guy.”

“People were making wetsuits and surfboards and ugg boots and leather goods,” says Baker, whose next book, Patting The Shark, is available for pre-order. 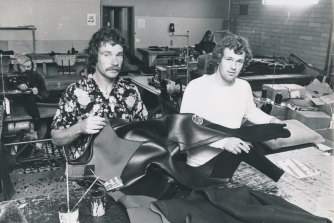 “It was a way of escaping the city and the boring humdrum nine-to-five, living in cheap sharehouses and surfing whenever they wanted.”

With rent averaging $20 a week, shared amongst many housemates, and vegetarianism the standard dietary choice, all most of the local surfers had to come up with was about $10 a week to sustain their utopian lifestyle. 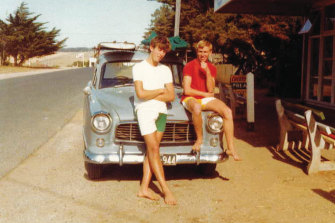 “There were so few surfers, especially mid-week or in winter – I often struggled to find someone to surf with,” he says.

“[Torquay] was different – it was very rural with virtually no businesses [for employment] unless you worked in a pub. The mail was still delivered by horse and cart and if you had to go shopping or to the bank or the doctor, you had to go to Geelong. I don’t think any of us went there believing we could make a good living out of standing on a surfboard.”

The surfers who’ve lived to tell the tales of this “golden era” of surfing say the folklore is pretty bang on; it truly was a liberating time where friendships – and waves – were everything.

“It was such a rich era [thanks to] a combination of the [surfing] short board revolution and counter culture and recreational drugs, anti-Vietnam [sentiment], sexual liberation and the Pill,” Baker says.

Bohemians all over the country were rejecting city living in favour of coastal hamlets where they organically created a new surf culture that became the envy of the world.

Baker puts a lot of Australia’s global surfing influence down to the way Aussies embraced short boards that were better suited to our “punchy” beach break waves, as opposed to the cruisy long boarding of California’s point breaks. At the same time, surfing movies depicted Australia as remote and untouched.

“In California the dream had already been a bit tarnished with a lot of coastal development, so I think a lot of surfers looked at Australia as this new frontier,” Baker says.

“Americans who came out here for the 1970s World Titles in Torquay just never left.”

Victoria was hardly the only corner of the country with cottage industries operating from every shed and kitchen table. Gordon Merchant had started making Billabong board shorts on the Gold Coast in 1973, and Brookvale in Sydney’s northern beaches was another hotbed of surf culture.

“They were wonderful days – all we did was party and go surfing,” recalls Shane Stedman, 81, who founded Shane surfboards and Ugg Boots.

“We had a brand new factory in Brookvale in 1967 for $60 a week in rent. Within six months we were making 150 boards a week and selling Ugg boots to the people who bought our boards.”

Like most surfing start-ups of the time, he hired gun local surfers who were passionate about the work and would work nights if the surf was up. 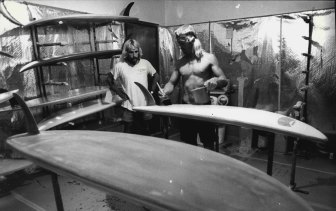 Shane Stedman in his workshop in the northern beaches in 1972.Credit:Photo: Supplied

“We were a nation of workers – we’d been taught to work ever since we got out of the convict chains,” Stedman says.

“You got paid for what you did, and those of us who wanted to work could make good money.”

When the surf beckoned, he’d strap some boards to the roof of his Jag and speed towards the Sunshine Coast, stopping at surf shops along the way.

“You’d never [drop below] 100 miles per hour – there were no speed cameras then,” he says.

“You’d say, ‘I’m in town, come for a surf’ and you might buy ’em a meat pie for lunch and that was the extent of the bribery and corruption. They’d order half a dozen boards and you’d bring them up in three or four weeks.”

Capitalising on the culture

It’s easy to take for granted the well-shaped surfboards and warm, flexible wetsuits filling surfshop shelves today, but rewind 60 years ago and you’d see a time of primitive designs begging for major innovation.

“I remember seeing some guys riding surfboards from a school bus window in 1962 and it was like seeing something from out-of-space – it was remarkable,” recalls Paul Trigger, 72, of Trigger Brothers, the iconic surf brand from Victoria’s Mornington Peninsula.

“There was no one to tell you what to do, you just saw something on the TV or saw what other people were doing and tried to copy that.”

While the “surf’s up, tools down” attitude of the surf brands reigned supreme, a cohort of entrepreneurial thinkers spent enough time on dry land to build their brands using tireless trial-and-error.

“Americans who came out here for the 1970s World Titles in Torquay just never left.”

“We were very experimental, going from having surfboards that surf clubs used to foam and then fibreglass. This all happened really quickly and things got better and better and better,” Barr says. 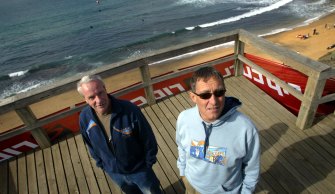 Rip Curl co-founders Brian Singer and Doug Warbrick at Bells Beach at the start of the Rip Curl Pro-Surfing championships in 2004.Credit:Paul Harris

“It was revolution rather than evolution.”

“They were comfortable and hard-wearing [unlike] wearing shorts not made for surfing [that] would fall apart and rub you in places you don’t want rubbed.”

“You can’t do that any more [you] poor buggers – it’s a totally different place.

There were four sets of traffic lights between Mona Vale and Brookvale, and now there’s about 34,” he says.