From Chris Watts' tearful plea for his family's return to his confession mere hours later, this 2018 murder case was an unbelievable whirlwind of horror. 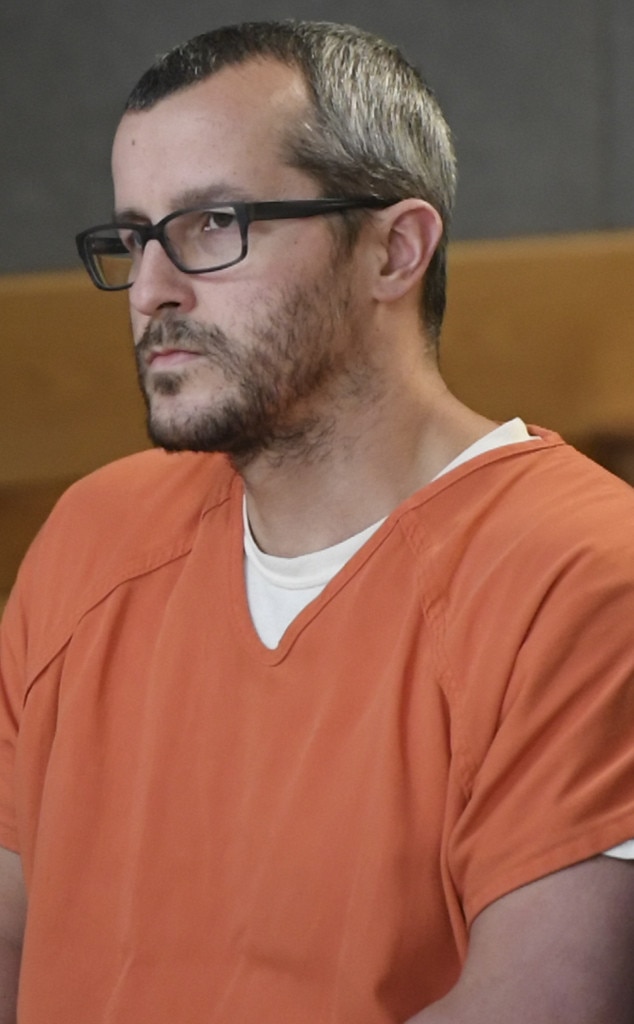 In an effort to avoid the death sentence, he had pled guilty on Nov. 6, 2018 to killing his pregnant 34-year-old wife Shanann Watts, and their daughters, Bella, 4, and Celeste, 3, not quite three months earlier. And the five life sentences that would be handed down weeks later—plus additional time for the murder of his unborn son and three counts of tampering with a dead body—were all but a certainty.

Since the revelation that the Colorado father, who had pleaded with cameras for the safe return of his family, calling it "a nightmare that I just can't wake up from," was actually the person responsible for their lifeless bodies ending up on a remote mine field, there was no shortage of people willing to speak out about his character (or lack thereof) and the problems he and Shanann had faced in their six-year marriage.

But none proved more damaging than his former mistress, who broke her silence in a November 2018 interview with The Denver Post. "He's a liar," asserted Nichol Kessinger. "He lied about everything."

The shocking depths of his morality—already dissected on Lifetime, Oxygen, YouTube and in living rooms across America—will be explored once more in Netflix's Sept. 30 documentary, American Murder: The Family Next Door. But for Nichol it all began with that first deception, when he told her he was in the process of getting a divorce.

As news crews descended on Chris' Frederick, Colo. home the day after his wife and kids went missing Aug. 13, 2018, some viewers saw a man distraught over the sudden disappearance of his 15-weeks-pregnant wife (she was expecting a boy, to be named Nico) and daughters. Others took note of a man showing a remarkable amount of emotional restraint considering his current heart-wrenching situation.

Nichol? She saw a man who was very much still married despite all his protestations to the contrary.

She had first connected with the 34-year-old Anadarko Petroleum employee that June, through her work in the environmental department of one of the company's contractors. As Chris walked into her office to introduce himself, Nichol would recall to the paper, she made note of his everyman good looks and absence of a wedding ring. "When he spoke to me, he was very soft-spoken," she told the paper. "He appeared to be a good listener."

He opened up about his girls and his marriage, revealing he was in the late stages of divorce proceedings. "I believed him," said Nichol. So, though she was insistent that they move slow, what with him needing to focus on the wellbeing of his daughters, they began a physical relationship in July, seeing each other some four or five days a week.

During Chris' visit with family in North Carolina later that month, he phoned Nichol up to share that his divorce was finalized, asking for assistance in locating an apartment. Said Nichol, "He made me believe that he was doing all of the things that a rational man and good father would do."

Though she was instantly labeled as the other woman, a potential motive for his senseless actions, she insisted that couldn't be the case. "We just met," Nichol noted. "I barely knew him."

That became painfully clear to her on Aug. 13 when Chris texted to share that his family was "gone," Shanann purportedly taking the girls to a playdate and never returning. But since Chris seemed calm and relatively emotionless about the whole situation, Nichol assumed it would turn out fine, doing her best to put it out of her mind.

Netflix’s Trailer for Chris Watts Documentary Will Give You Chills

Then she noticed that camera crews had begun showing up at the 4,177-square-foot spread he shared with Shanann, just north of Denver. And she learned her wallet and purse were still inside, Shannan failing to respond to a single frantic message she'd received from countless friends.

The final bombshell came as she scanned various reports. "When I read the news, I found out he was still married and his wife was 15 weeks pregnant," Nichol said. "I thought, 'If he was able to lie to me and hide something that big, what else was he lying about?'"

Over a series of texts she peppered him with questions: Were there any signs of force entry? Were other key items there such as his daughters' car seat and EpiPens? Sensing that his response was "off" as she put it, she continued to send inquiries the next day, demanding he share everything he knew. "It got to a point that he was telling me so many lies," recalled Nichol, "that I eventually told him that I did not want to speak to him again until his family was found."

But Nichol did have someone else she wanted to chat with. She called up the Weld County Sheriff's Office and let them know she had been seeing Chris, unaware that he had lied about his marital status. She met with FBI investigators that same day. "I just wanted to help," Nichol explained. "With a pregnant woman and two children missing, I was going to do anything that I could."

She watched on the news the night of Aug. 15 as Chris was arrested for all three murders. "I don't think there is a logical explanation for what he did," she said. "It's a senseless act, and it's horrific."

As was the charade that followed.

The day after Chris' arrest, Shanann was discovered in a shallow grave at the oil site while their daughters were located submerged in drums containing crude oil. Soon after, a jailed Chris finally agreed to tell investigators what he called "the truth." Previously he'd claimed they had disappeared on their own after he and Shannan—fresh off a work trip to Arizona—had a "civil" but "emotional" discussion about his desire to divorce. Now he had a different story to tell.

Asking to speak to his father, Ronnie Watts, in the interrogation room, he claimed he'd strangled Shanann in a "rage" after watching her strangle Celeste following their break-up talk and he saw Bella's body, lifeless and blue, on her bed. With all three deceased, he continued, he put their bodies in his truck and drove the 40 miles to the oil field to bury them.

The explanation was shocking and literally unbelievable to authorities. "There is absolutely no evidence that she killed her children," a source close to the investigation told People. "None at all. And there is physical evidence to tie him to their murders. Strangulation is a very personal way to kill someone, with a lot of physical contact. Just based on the preliminary evidence, everything is consistent with him killing them all."

It's an action he finally admitted to Nov. 6 in an effort to avoid a potential death penalty, pleading guilty to nine charges: five counts of first-degree murder, one count of unlawful termination of pregnancy and three counts of tampering with a dead body.

And yet his family remained insistent that he couldn't have possibly done it.

"There's not one person you can talk to that will say anything about this kid," mom Cindy Watts, who like his father Ronnie believed his original version that he only killed his wife after she murdered their kids, told ABC 11.

"It's hard for me to believe that he would hurt them girls no matter what," Ronnie agreed. "The story he told me that night, I believed it: The way he looked at me, the way he was crying, I believed it."

Following his plea, she said, she worried what would happen to her son who spends 23 hours a day in his cell under "Close Watch Protocol," a technical name for suicide watch. While he had access to a communal newspaper during his once-a-day outing to the common room, in his cell he had just two personal effects: a bible and a photo of his slain wife and children.

"He was normal," Cindy insisted, "he didn't have a temper, he was just easy-going like his dad. He's not a monster."

That's a term she seems to reserve for her former daughter-in-law. Claiming that Chris changed after meeting his future bride in high school, Cindy said she could be abusive, manipulative and worked to isolate him from his family. Her interactions with Shannan often fraught, she said, "It was a very hard relationship."

As such, she alleged, she felt Shanann was "more capable than Christopher" of killing their kids: "Christopher, I don't see him capable at all, but if something happened that night and that did happen—God forbid if it did happen—what was the trigger? Why? What happened? I just want the truth because he's not the sociopath next door. He's not the kind of person that would do something like that. I have to know why."

Getting to the root of what happened was also critical to Colorado Bureau of Investigation agent Tammy Lee, who, alongside FBI agent Graham Coder, put in the work to elicit Chris' confession. That's why, she shared in a December 2019 episode of Oxygen's Criminal Confessions, she paid Chris a prison visit some six months after the murders.

"I needed to hear him say that Shannan did not murder her children," Tammy explained. "I needed to have that come out of his mouth." As viewers saw, Chris not only admitted to killing his wife after confessing he no longer loved her, he also shared that he'd bundled his daughters into the car while they were still alive to dump Shannan's body at the mine field.

"Nobody had ever contemplated, that I recall in any discussion, that the girls were alive when he drove them out to the oil site," remarked Chief Deputy Weld County DA Steve Wrenn. And yet, according to Chris, they were there to observe him burying Shanann, his eldest, Bella, even looked on as he smothered her younger sister and placed her lifeless body in the nearby oil tanks.

An impossibly haunting exchange to imagine, it's one Chris relives time and time again. "He is tormented by his past and the mistakes he made," a source told People of his life in a Wisconsin prison. "He's left alone with his thoughts for 24 hours a day, 7 days a week. Every day. Birthdays. Holidays. Special occasions. He's there in jail, in his cell, thinking about what happened. He's in his own private hell."

His bed made, he has to relive his daughter's final moments over and over.  "Chris told us that, every night when he closes his eyes, he hears Bella yell, 'Daddy, no!'" said Tammy, sharing she considered it a fitting punishment for him to feel even an iota of the pain he inflicted. "I feel like it's kind of what he deserves," she shared. "I hope he hears that every night."